Donald Trump Should Talk to Russia to Thwart China 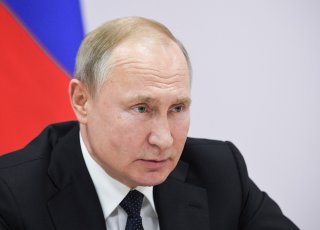 Russian President Vladimir Putin is thinking about his country’s place in the world. We in America should be thinking about that too, especially as the long-term conflict with China intensifies. This is a chance to focus more on what we might have in common.

Putin published a remarkable 9,000-word article in the National Interest ahead of this week’s delayed celebration in Moscow of the 75th anniversary of the defeat of Nazi Germany. He recounted the immense cost to the Soviet Union of that war, including the deaths of 27 million of its citizens, and defended Soviet leaders for cutting deals with Hitler to buy time to build defenses.

The foreign policy elite in Europe and the United States will be angered by Putin’s defense, including his observation that Britain and other European governments also cut deals with the Nazis. His mischaracterization of the absorption of the Baltic states by the Soviet Union detracts from his other revisionist arguments, which should interest historians and World War II buffs.

But whatever one thinks of Putin’s view of history, his intent is clear: to press for dialogue among the world’s great powers as a way to manage disagreements and limit conflict. The fact that he wrote such a long piece, walking readers through his thinking about the emergence of the modern world and his view of Russia’s place in that world, is helpful. The dialogue that Putin proposes suggests limited rather than expansive foreign policy objectives.

Unfortunately, the West has given Russia scant reason to explore cooperation and would be hard-pressed to design a better program to push Moscow into Beijing’s arms. Washington maintains a complicated patchwork of sanctions on various Russian business sectors, officials and private individuals. Restrictions on energy-related entities in particular seem designed to promote Russia’s cooperation with China, which would be pragmatic given Russia’s abundant natural resources and the ever-growing energy demands of its populous neighbor.

Washington imposed many of these penalties for Russia’s 2014 invasion of Ukraine and seizure of Crimea. It is time to consider whether they still make sense. Putin was very careful in choosing small portions of eastern Ukraine to break off in each of two regions with significant ethnic Russian populations and a majority of Russian-language speakers. His move was not the preface to reconstituting the Soviet Union with force, but likely an effort to force Ukraine to make concessions and prevent it from joining NATO. Putin’s absorption of Crimea back into Russia, to which it belonged for most of the time since 1783, was even more strategic in that his target was overwhelmingly ethnically Russian and Russian-speaking.

After six years of sanctions, neither Crimea nor eastern Ukraine appear any closer to reintegration with Ukraine. Put simply, there is no chance of Russia returning these lands, since doing so would require a war that Ukraine and Europe lack the will or capability to pursue. Furthermore, the penalties Washington imposes now seem likely to harm America more than Russia, with China being the primary beneficiary. The United States should recognize this reality and move on with our relationship with Moscow, even if we still consider the territories to be disputed pending a future settlement.

It is worth initiating a serious dialogue with Moscow. Putin wrote that Russia is willing to discuss arms control. Even if a breakthrough is unlikely, the conversation itself would give Moscow a diplomatic outlet that doesn’t run through Beijing. Separately, we could cooperate on space exploration, reprising past collaboration, especially since we are closer to technological parity in this field than others.

The goal of engagement need not be a dramatic breakthrough, just a reasonable hope that Russia will have some incentive to remain neutral and not aid our adversaries. Moscow would still work with China on some issues, especially energy, but would work with us too and might support us or stay on the sidelines for issues we consider to be really important. This situation would be very attractive to Russia because from its perspective it would be in the balancing position, closer to both Washington and Beijing than we are to one another, and therefore able to get more out of us and China as we compete for their support.

Everyone has heard of Winston Churchill’s quote that Russia is “a riddle wrapped in a mystery inside an enigma,” but there is a second part to the quote: “… but perhaps there is a key. That key is Russian national interest.” Churchill was able to check his deep animosity for the Soviet Union to cooperate in an area where he saw overlap with Moscow’s interests. His pragmatic realism was captured best by another quote: “If Hitler invaded Hell I would make at least a favorable reference to the Devil in the House of Commons.”

Based on his article, Putin may grasp the utility of pragmatic cooperation in a similar manner. As America finally recognizes the magnitude of the fight it has with China, it is crucial to approach Russia with realistic expectations and outcomes that serve both of our interests.