Donald Trump's Iran Policy Comes Down to One Word: Chaos 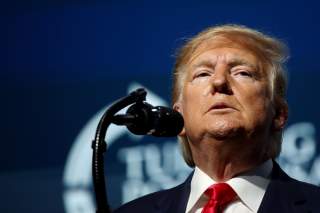 Iraqi leaders overwhelmingly criticized the U.S. raid, which Prime Minister Adel Abdul-Mahdi called an "assassination." The Daily Beast quoted an Iraqi official as saying: “Some will celebrate, some will mourn, some will seek revenge.” However, U.S.-Iraqi relations were in “real jeopardy.”

Abdul-Mahdi said "the two martyrs were huge symbols of the victory" over ISIS. He denounced the “aggression against Iraq” and "massive breach of sovereignty" which violated the conditions governing the American military’s presence in Iraq. He worried about “a dangerous escalation that will light the fuse of a destructive war in Iraq, the region, and the world.”

The premier invited parliament to reassemble in special session to “take legislative steps and necessary provisions to safeguard Iraq’s dignity, security and sovereignty.” And that likely means a full-scale assault on America’s presence. Deputy Speaker Hassan al-Kaabi said they would gather and make “Decisive decisions that put an end to U.S. presence inside Iraq.”

Perhaps more ominous was the reaction of Shiite extremist religious leader Muqtada al-Sadr, whose Mahdi Army once battled American occupation troops but who had turned populist politician, most recently pressing for his nation’s independence from both the U.S. and Iran. He praised Soleimani and reactivated the Mahdi Army. On Twitter he instructed his "fighters, particularly those from the Mahdi Army, to be ready" for action following the airstrike.

At least al-Sadr was ambiguous, only saying that their job was to defend Iraq—though almost certainly he meant from the U.S. Qais al-Khazali, head of the Asaib Ahl al-Haq militia, a member of al-Muhandis’ Popular Mobilization Forces, was more explicit when he also ordered his fighters to get ready. He declared: “All fighters should be on high alert for upcoming battle and great victory. The price for the blood of the martyred commander Abu Mahdi al-Muhandis is the complete end to American military presence in Iraq.”

President Trump’s policy toward Iran continues to bear ill fruit. When he entered the Oval Office, Tehran’s nuclear program was limited by a tight inspections and safeguard system. The Islamic regime faced internal tensions as the young, especially, hoped for greater economic opportunities in the West. With Iran’s nuclear ambitions tamed, the U.S. and allied states could follow up with a challenge to Tehran to moderate its regional behavior in return for additional, appropriate concessions.

Instead, the president abandoned the JCPOA, reinstituted sanctions, and added new ones while demanding that Iran abandon its independent foreign policy. Tehran naturally refused.

Today Iran is simultaneously facing instability at home and creating instability abroad, more active than ever throughout the Middle East. The regime has revived its nuclear research program and breached the negotiated limits. Tehran’s missiles have become even more important in deterring the well-armed Saudi royals, who seemingly have Trump administration officials on retainer. Worse, the U.S. and Iran now are publicly at war. They risk setting off an escalatory cycle which could result in disaster. So much for the policy of maximum pressure.

But there is still time for America to pull back from the brink. U.S. policymakers must abandon the fantasy that they can manage the world and especially the Mideast. Rising opposition to America’s presence in Iraq should become the catalyst for a general withdrawal of U.S. troops from the region.

The Middle East no longer matters so much. The cost of continued American military involvement exceeds any plausible benefits. Allied and friendly nations should take responsibility for their own defense. Most important, the U.S. should declare neutrality in the Shia-Sunni struggle, leaving the players to reach their own accommodation. No more endless wars fought for others. No more military deployments manipulated for the benefit other nations. Rather, a foreign policy finally focused on protecting, serving, and benefitting Americans.

Doug Bandow is a Senior Fellow at the Cato Institute.  He is a former Special Assistant to President Ronald Reagan and author of several books, including Foreign Follies: America’s New Global Empire.