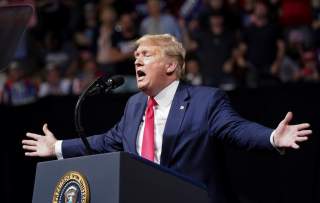 Take a glance at Nicolás Maduro, and he appears like an unimaginative, average, run-of-the-mill guy with a black mustache and bushy eyebrows. The school-bus driver-turned Venezuelan president, however, is smarter and craftier than he looks. The United States has thrown a ton of financial pressure his way, stripped him of diplomatic recognition, and rendered him a pariah in the Western Hemisphere.

And yet despite over a year-long Trump administration maximum pressure campaign on Caracas, Maduro remains on top of the Venezuelan political structure. Yes, Venezuela’s economy may be in the seventh straight year of economic contraction, the public school system is hemorrhaging teachers, and the country's healthcare system is so decrepit that patients have to buy their own medicine. And sure, Venezuela is now the laughingstock of Latin America, with 5 million people fleeing for Colombia, Peru, Brazil, and other countries in the region. But Maduro’s regime is still intact, save for the defection of a few thousand low-level soldiers (nobody knows for sure how many have stripped off their uniforms) and its intelligence chief.

With a lot of help from his friends in Russia, Cuba, and China, Maduro has proven to be a survivor. You wouldn’t know it by the state of his country, but Maduro is confident enough in his position to be giving interviews to U.S. newspapers in the presidential palace where he declares victory against the yanqui empire to the north. For somebody like Trump, who likely thought he could squeeze Maduro into exile as easily as he can tap out a tweet about the “deep state.” That Venezuela’s kleptocrat in chief is still standing must be a gut-punch to his ego.

Every strategy Washington has designed to weaken Maduro’s hold on power has failed. Venezuela may be a pipsqueak country that can’t even supply shoes for its teachers, yet it’s a nut the Trump administration hasn’t been able to crack.

When coupled with the Maduro regime’s epidemic mismanagement and currency crisis, Washington’s sanctions have hit Caracas hard. Venezuela’s GDP decreased by over 19% in 2018 and is predicted to contract by another 10% this year. Moscow, however, has sent Maduro a lifeline of credit and loans and ordered its subsidiaries to disguise Venezuelan crude oil as Russian firms ship it to the international market. To the Russians, Maduro is a way to spit in Washington’s eye and encroach into a nation that sits on the largest proven oil reserves in the world.

In league with sanctioning Caracas’ crude exports, the administration has also executed a full-fledged diplomatic assault to starve Maduro of international prestige. Trump has not only bestowed his support upon Juan Guaido, but has also provided the young opposition leader and president of the National Assembly with a nationally-televised shout out at the State of the Union. U.S. officials have tried to establish back-channel talks with some of Maduro’s senior ministers with the aim of peeling them away. The administration has discussed coup plans with Venezuelan military officers. None of those conversations have resulted in anything beyond interesting stories. The closest Washington got to pushing Maduro out was last year, when an anti-regime mutiny of a small group of Venezuelan soldiers was snuffed out quickly.

Despite the lack of results, the White House is persisting with its pressure strategy and promising more sanctions in the future. In public, Trump’s national security advisers are sure of themselves, trumpeting how devastating the financial measures have been on the Venezuelan economy and talking as if the South American country’s return to democracy is only a matter of time. None of it matches the on-the-ground realities.

While every nation in the Western Hemisphere (with the exception of Cuba) would hope and cheer Venezuela’s transition back to democracy, hope is not a policy. Caracas will continue to suffer hours-long blackouts, the humanitarian crisis in Latin America will continue to stretch the resources of regional governments, and ordinary Venezuelans will do what they can to survive.

Much like maximum pressure on Iran has run its course, maximum pressure on Venezuela is worsening the humanitarian situation and having no discernible impact on whether Nicolás Maduro stays or goes. As defeatist as it may be to some, the United States needs to change its policy, redefine its strategy, and tailor it to objectives that are more reasonable.

Washington should get out of the way and let Latin America negotiate a face-saving resolution that alleviates the crisis. Short-term democratization will have to wait.