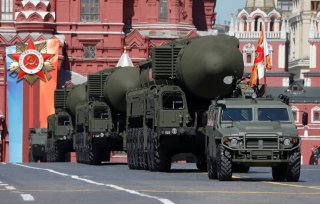 President Vladimir Putin’s recent order to put Russia’s nuclear forces on high alert sparked panic that the situation in Ukraine could go nuclear. Russia and the United States have the world’s largest nuclear arsenals, so the notion that President Putin would even consider using nuclear weapons in Ukraine is unsettling.

In the past ten days, Ploughshares Fund has produced two timely podcast episodes on the crisis in Ukraine. In the first, Ploughshares President Dr. Emma Belcher spoke with Dr. Kristin Ven Bruusgaard, a professor at the University of Oslo and a member of the Oslo Nuclear Project, on how this crisis can escalate into nuclear warfare. In the second, host Tom Collina broke down the meaning of Russia’s raised nuclear alert level with Jon Wolfsthal, Global Zero’s Senior Advisor.

What exactly does the increased nuclear alert level mean? According to Wolfsthal, this relates to changes in Russia’s personnel readiness. While the heightened alert may ultimately be considered a more symbolic decision, the fact that President Putin is willing to transmit this signal to the world—that the possibility of nuclear use is not out of the equation—reinforces the concern that nuclear war is not an impossibility in this current crisis.

Noting that “NATO and European allies are funneling military support into Ukraine,” Wolfsthal asks: “if [Putin] were to find that he was losing, would he use a nuclear weapon to tell everybody to back off or to interdict supply lines in Western Ukraine?"

While concern over what Putin may do has been at the forefront of the conflict in Ukraine, experts did not predict that he would launch a full-scale invasion into Ukraine or threaten the use of nuclear weapons.

This isn’t the first time that Putin’s Russia has acted this aggressively. Wolfsthal notes that “we’ve seen Vladimir Putin’s horrific behavior towards Chechnya, towards Syria, towards Russians in Russia.” Rather than providing a path to understanding Putin, these past examples of Russian aggression reinforce his skewed cost-benefit calculus, thus making it difficult for experts and policy-makers to predict what he will do next.

On the special episode of Press the Button from March 4, Dr. Kristin Ven Bruusgaard discussed how this skewed cost-benefit analysis can potentially lead to greater conventional conflict. Dr. Bruusgaard said, “This [stability-instability] paradox pertains to this issue of stability at the strategic level, so the mutual threat of [nuclear] retaliation produces a situation where you have two sides that are quite confident they can conduct a range of different activities without risking nuclear exchange. Because [nuclear war] would be so devastating, that stability at the strategic level produces large incentives for instability on lower levels of violence.”

In line with this paradox, Russia believes that it can invade Ukraine without military action from the United States, as the risk of nuclear conflict is too high. At the same time, the United States believes it can provide military aid to Ukraine without Russian retaliation due to the increased nuclear risk it would create. However, when the nuclear threshold is broken, the paradox breaks as well, and both the United States and Russia may find themselves in an escalating vortex that will be very difficult to escape.

Angela Kellett is the Roger L. Hale Fellow at Ploughshares Fund, a global security foundation. Her Work focuses on nuclear policy, conflicts in the Middle East, and China. You can follow her on Twitter @angiekellett.

Chase A. Enright is the Development Coordinator with Ploughshares Fund, a global security foundation dedicated to the elimination of nuclear weapons.