The Greatest Show on Earth: Trump's Trade Talks with China 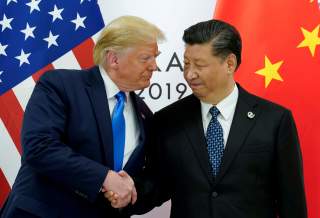 BEIJING — Chinese officials are confident in their nation’s rise, but are nervous about China’s deteriorating relationship with the United States. Most of them are aware of America’s strengths and their nation’s weaknesses and have no interest in conflict. Left unsaid, but too obvious to miss, is the fact that the assertive policies of their increasingly authoritarian president have left the People’s Republic of China weaker and more isolated in almost every respect.

But what makes many people most nervous are the increasingly fractious economic ties. Although worsening recently, human rights always has been a contentious bilateral topic. Pressure on Taiwan and Hong Kong has been building, but only the speed is surprising. Views on Beijing’s role in North Korea always varied widely. The PRC’s more aggressive pursuit of its territorial claims in nearby waters has been matched by greater toughness by those governments with conflicting claims. Recent changes have been in degree, not kind.

But that does not hold true for the commercial relationship. Since the United States and China grew increasingly close in the 1980s the bedrock foundation of the bilateral bond was economics. With seemingly endless low-cost labor, China multiplied possibilities for international supply chains. American consumers were significant and conspicuous beneficiaries. Companies also imagined themselves doing well. Finally, it appeared, they had access to the long-fabled illimitable markets of China. Whenever Washington-Beijing ties were challenged, much of the American business community rushed to defend its ever more important trading partner.

All that has changed. A rising, aggressive China is triggering security fears in Washington. U.S. policymakers long treated the Pacific, up to the PRC’s coast, as an American lake, but Beijing is threatening to force the U.S. military away from nearby waters. The detention of a million Uighurs, systematic attack on religious liberty, and crackdown on Internet access and academic freedom are generating intense human-rights criticism. Strengthening this antagonistic crescendo are those who argue that America made a mistake originally engaging with China and thereby enriching what now should be treated as an adversary if not enemy.

This withering assault has faced little resistance. Unlike in the past, American business is not leading the China defense team, which essentially means there is no China defense team. Frustration with Beijing’s manipulation of economic rules to the disadvantage of Western companies has soured investors and traders on the China market. They are sitting out this fight.

In fact, when President Donald Trump initiated his trade war, many firms cheered. There was much to criticize in how he proceeded. For one thing, the trade deficit is an irrelevant accounting figure. The real problem is the underlying policies that force technology transfers, allow intellectual property theft, and disadvantage foreign firms. Trump’s blunderbuss approach unnecessarily harmed Western consumers and exporters. Nevertheless, there was only limited corporate resistance to his efforts.

Eleven negotiating sessions over U.S. demands resulted in a breakdown, followed by Trump’s threat to impose massive new tariffs on China. The two countries looked like they might be locked in a long, bloody economic war. They still may be, though the president now seems to think otherwise. After meeting with Xi at the G20 economic summit, Trump proclaimed that their session was “excellent” and that their talks “went better than expected.”

Yet critics complained that he made most of the concessions, dropping his planned levies and relaxing restrictions on Chinese telecommunications giant Huawei. He said China planned to purchase more agricultural products—a political sop to an important constituency in his 2020 reelection bid. But the proposal ignores other U.S. exporters as well as consumers, and is a dangerous move toward managed, government-directed trade. Nor did Xi confirm the pledge, and prior such commitments have proved stillborn.

Perhaps most importantly, Trump claimed that trade talks were “back on track.” One influential Chinese official told me the result was a “positive signal.” But, apparently, the negotiations are no closer to agreement. They collapsed after U.S. officials accused their Chinese counterparts of reneging on prior commitments, to which Beijing claimed it had not agreed. Nothing in Xi’s manner suggested retreat.

Indeed, promises are not enough. Washington needs action to reduce some of the most significant disadvantages facing foreign enterprises. With no concrete Chinese concessions in hand, Trump looked again to critics who have been seduced by superficial promises, convinced of his “friendship” with the Chinese leader. In practice, he is no master negotiator. His demand for amending the South Korea free trade agreement and NAFTA was satisfied by minimal changes. His dealings with foreign leaders such as Saudi Arabia’s Mohammad bin Salman demonstrate a marked tendency to sacrifice U.S. interests to foreign demands. Trump’s dealings with the PRC look like they might be a repeat performance.

The challenge in the China trade talks is figuring out what is realistically achievable. It is common for professionals traveling to China to bring “burner” laptops and phones, to limit surveillance and hacking. No promise from Beijing is likely to change that. Additionally, it is unlikely that the Xi government going to abandon its extension of state authority throughout the economy: the regime is using the new totalitarianism to cement party control.

However, the theft of Internet Protocol addresses, forced technology transfer, disparate legal treatment, investment restrictions, and domestic favoritism are negotiable issues warranting remedy; threatening the PRC’s access to the U.S. economy is one lever. The administration should address these issues, not force China, government or individuals, to purchase more agricultural goods. Yet, by emphasizing the latter the president continues to sacrifice permanent and important interests for ephemeral and peripheral gains, which creates the danger that the trade issue might explode anew even after an election-minded president thought he achieved an easy out of the conflagration he created.

A farm buyout won’t satisfy most Americans antagonized by Chinese policies. The business community, other than farmers, would continue to suffer disadvantages and losses in the Chinese market. This outcome would allow Democrats to turn China into a political issue against the president. Who in turn might see the need to again play tough with Beijing.

Xi Jinping argued at the post-meeting press conference that “one basic fact remains unchanged: China and the United States both benefit from cooperation and lose in confrontation.” That may be true, but Americans increasingly have come to believe that cooperation as defined by the PRC is exploitation, which helps explain the diminishing support for today’s commercial arrangements.

It won’t be enough for the president to forge a pact giving him brief bragging rights politically. He needs to press for sufficient yet realistic reforms to put the relationship on a firmer and sustainable foundation. And he must convince the Chinese leadership that such changes are in the PRC’s benefit as well.

Far more than American jobs and profits are at stake. If the two nations’ basic commercial relationship crumbles, then the other important divisions between the two governments are likely to widen, increasing the possibility of what already is being routinely predicted, a new cold war between Beijing and Washington. That wouldn’t be in either nation’s interest. But nationalistic forces on both sides of the Pacific make such an outcome increasingly possible.

Unsurprisingly, PRC officials strongly defend their government’s position. However, there is little triumphalism, a Chinese variant of Nikita Khrushchev’s vow to “bury” America. National confidence and pride mixes with awareness of the PRC’s own shortcomings and America’s continuing power.

The United States needs to respond accordingly. Engagement remains the only realistic policy for both sides, but Americans must recognize that they were overly optimistic in believing that capitalism would inevitably turn China into another America. Washington and Beijing should set a simple, realistic objective: ensuring that cooperation predominates over confrontation in their relationship. That might be just enough to keep the peace in the coming years.