How To Stop A New 'Forever War': Bring Back the Draft? 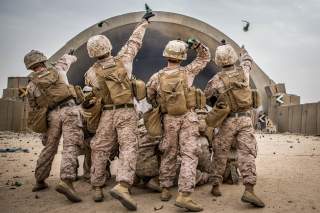 After President Donald Trump ordered the assassination of Iran’s Qasem Soleimani, raising the possibility of deadly retaliation, panicked draft-age men crashed the Selective Service website. They worried that conscription might return after almost a half-century.

However, neither country escalated. And the U.S. would have emphasized air and naval power in any conflict. A mass draft army would have been of little use.

That’s good news for America’s young men—and perhaps women, who might be conscripted in the future. However, some antiwar activists believe the lack of a draft makes conflict more likely since most Americans feel little connection to the military even in the age of “endless wars.” Indeed, the Fletcher School’s Daniel Drezner blamed the end of conscription for having “allowed most of the public to stop caring about vital questions of war and peace.” Boston University’s Andy Bacevich and the Center for a New Economic Security’s Thomas E. Ricks, among others, paradoxically advocate a draft to reduce Washington’s extraordinary propensity for war.

Conscription has been a staple for warring governments over the centuries. It probably is the only way to create a mass army, especially for anything other than desperate defense against an invader. Even the United Kingdom, with a tradition of voluntary military service, imposed a draft in World War I once the initial expeditionary force had been ground down. The Wilson administration, with no compelling reason to drag America into Europe’s imperial slugfest, didn’t even consider relying on volunteers. All the major powers used conscription in World War II as well. America’s armed forces peaked at 13 million (mostly) men under arms.

Today, however, it is hard to concoct a scenario under which the U.S. would need to deploy a similar mass military. Europe alone outranges Russia on most measures of power. Any U.S. conflict with China would not likely feature ground combat in Asia. Most everything else is a mix of counter-insurgency and -terrorism, with a much lighter footprint. Occupying another third world conquest would not require large numbers of conventionally trained troops.

Without even a pretense of necessity, the case for conscription today is quite thin. Coercion is a poor means of instilling patriotism, compassion, brotherhood, and other alleged virtues. Whatever the ancillary social benefits of military service, they cannot justify forcing millions into uniform upon pain of prison. A draft does not save money; instead, it shifts costs onto draftees. That is neither fair nor particularly effective. Washington could save more money by conscripting postal workers or medical personnel.

Moreover, in toto conscription is not cheap. It encourages extensive draft avoidance activities, lowers personnel quality, distorts labor markets, rewards indiscipline, and undermines a stable career force. Most military officers value a force made up of people who want to serve. The latter are most likely to perform their duties, invest in training, reenlist willingly, and seek to succeed. A draft military must keep poor performers, since releasing them would be a reward.

Of course, patriotic conscripts have served America bravely and well. However, the incentives overwhelmingly favor a force whose members chose to join. On virtually every measure the All-Volunteer Force is much better trained and prepared than the draft militaries which preceded it. If you want the most effective armed services, you choose the AVF.

This leaves the argument that a volunteer, professional military reduces the public’s interest in international affairs. People feel very little stake in even losing conflicts since staying out of uniform insulates them from the costs. Moreover, since those in combat joined voluntarily, they, and their friends and loved ones, won’t complain even if their lives are wasted in incompetent campaigns for foolish objectives. Most important, elites, especially policymakers, have no “skin,” meaning family members or friends, “in the game.”

These are dubious arguments despite their superficial plausibility. The volunteer military appears to be more expensive since the government cannot impose costs on draftees. Thus, the public sees itself paying more for a bigger war, especially the longer combat goes. David R. Henderson and Chad W. Seagren of the Naval Postgraduate School found that “The evidence of the last 50 years supports the view that a war carried out entirely with volunteers has much higher personnel costs than a war carried out with a substantial proportion of draftees.” Of course, politicians attempt to disguise the burden of government spending through massive borrowing. Nevertheless, the monetary expense of war always will be more broadly distributed than the human toll.

Moreover, Americans long have paid little attention to events overseas. Living in the most powerful nation with the biggest economy and enjoying relative geographic isolation makes indifference easy. Despite the frenetic activity triggered in Washington by the least important event in the most distant nation with the least international significance, most Americans don’t care. And they suffer little for their ignorance.

Still, one could not easily ignore the impact of World Wars I and II, Korea, and Vietnam however military manpower was raised. Indeed, it was the outsize significance of the big wars which led to conscription. Not only was there a draft, but a substantially higher proportion of the population ended up in uniform and became casualties. In contrast, the conflicts are less important in the age of endless wars. During the height of combat in Afghanistan and Iraq casualties, dislocations, and costs were less than in past major conflicts. Even if men and possibly women were forced to serve today, the importance of, and resulting attention to, such conflicts would be far less.

Similarly, a far smaller percentage of the population would be affected by conscription today. In 2018 the four services (counting Marines separately) brought in 170,900 new accessions, as they are called. Roughly four million men and women turn 18 every year. That means just 4.3 percent of those hitting draft age actually end up in uniform. Even dragooning only men into service that would affect fewer than nine percent. But the military would still accept recruits, reducing the actual number of conscripts. Although the logistical tail varies by service, most U.S. military personnel are not in combat arms and most are deployed outside of direct combat zones. During the Vietnam War more than 8.7 million men were in uniform. Some 2.6 million were sent to Vietnam. Between 1 and 1.6 million either were active in or exposed to combat.

Nor would draftees be equally likely to be assigned to combat duty. Connections, education, skill, and more influence where new personnel are assigned. Those with families most able and likely to complain, and complain effectively, to policymakers would be less likely to end up in harm’s way. Assurances that a new draft would be different ignore the experience with governments everywhere. In fact, suggested Henderson, anyone concerned about a child being conscripted would more profitably invest in schemes to exempt or otherwise shield them from service than to lobby politicians, which has such a low possibility of success.

Conscription would be almost completely ineffective in putting policymakers and their spouses and offspring at risk. Most federal lawmakers do not have 18-year-old children. There are 80 million families and four million kids turning 18 annually, which comes to five percent. Assume an average 27 senators and congressmen a year with 18-year-olds. Of the latter one or two might be drafted—in a process devoid of exemptions and other privileges. The likelihood that the few who ended up in uniform would be sent into combat is very small.

Conscription could be made universal, hence proposals for mandatory “national service” encompassing civilian tasks. However, this would not increase opposition to war. If anything, such a program would obscure the unique nature of wartime military service. The family of someone drafted to, for instance, shelve books in a local library would not be likely to head to Washington to lobby Congress against a war that seems even more distant from its concern.

Perhaps the most serious problem with the argument that conscription would dampen enthusiasm for war is that political opposition takes time to gel. Americans very often give their presidents the benefit of the doubt, falling for plausible though flawed calls for action. Hermann Goering made that point to American psychologist Gustave Gilbert after the former’s capture. Gilbert insisted that in a democracy the people had a voice, causing Goering to reply: “Oh, that is all well and good, but, voice or no voice, the people can always be brought to the bidding of the leaders. That is easy. All you have to do is tell them they are being attacked and denounce the pacifists for lack of patriotism and exposing the country to danger. It works the same way in any country.” That sounds like the George W. Bush administration’s political script.

Moreover, conscription has been routinely employed because policymakers around the world viewed voluntarism as unable to supply necessary cannon fodder. During the American Civil War both South and North instituted a draft when people stopped volunteering. As noted earlier, in World War I the UK, which began with a volunteer military, turned to conscription to obtain the disposable bodies necessary for years of trench warfare. The barbaric casualties did not generate a popular upheaval demanding peace.