Iran Sanctions Expert: Trump Administration In Crisis Of Its Own Making 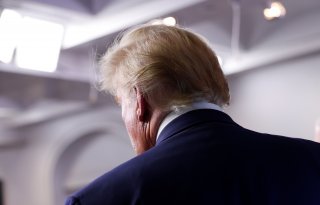 The Trump administration has pursued a policy of “super maximum economic pressure” aimed at bringing the Iranian government to its knees for nearly two years now. The European Union created INSTEX, a company meant to avoid U.S. banking sanctions by trading food and medical supplies in Iranian rials, in response.

INSTEX completed its first transaction yesterday. The Trump administration, which had threatened to sanction European for using the mechanism, suddenly stated that it had “no issues” with humanitarian trade.

The decision to stand down comes amid a worldwide coronavirus crisis, which is hitting Iran particularly hard. The U.S.-backed alternative “humanitarian channel” from Switzerland to Iran may not be enough, and domestic and international pressure is mounting on the Trump administration to relax its economic campaigns against long-time U.S. enemies.

The National Interest spoke to Bourse & Bazaar founder Esfandyar Batmanghelidj, a close observer of the Iranian economy, to learn more about U.S. sanctions and INSTEX. Below is a lightly-edited transcript of the conversation.

Thanks for your time. The first INSTEX transaction yesterday was pretty big news.

It was, although obviously the Europeans were trying to make it not-so-big news. There wasn't really a big statement. It was just this one paragraph from the German foreign ministry. But obviously, it's an important kind of moment.

Why do you think the Europeans wanted to keep it so quiet?

There are a number of reasons. The main reason why the Europeans didn't make too much fanfare about the first transaction is of course the officials that had been working on this and the team at INSTEX are mindful that there's a lot of political expectation around the mechanism.

Of course, its launch has been delayed in the eyes of certainly the Iranians and a lot of people who were hoping that this would come together sooner. So, what they're interested in is making sure that INSTEX really generates some momentum.

The first transaction is an important signal, but of course, we're long ways from calling INSTEX a success. So really, the interest is to see the company process numerous transactions, and then at that point the shareholders and the management will be able to be a little more open about the state of play.

It seems like the U.S. has also quietly dropped their objections. When I asked the State Department yesterday, they said that we have no problem with humanitarian trade, which is a big change from July, when [Treasury Secretary Steve] Mnuchin was threatening to sanction INSTEX.

It seems like the change was a little bit gradual, because in February, Brian Hook said he doesn't think INSTEX will actually be used to evade sanctions, there's no demand for it. What do you attribute the slow change in U.S. position to?

I think it's a couple things. One, I think the administration is facing a lot more pressure to be realistic about the need for them to proactively allow humanitarian trade to take place.

There has been a lot of flip-flopping from a lot of different officials from Treasury and the State Department on one hand indicating that they're find with INSTEX as a mechanism to support humanitarian trade, on the other hand, also threatening companies that might want to use the mechanism by suggesting that the Iranian counterpart entity is linked to designated entities in Iran.

The fact that now there seems to be a little less direct aspersions cast about INSTEX itself probably reflects, one, that they see that the Europeans are really committed to this mechanism, and that it's not just a political project that they could scare the E3 [Germany, Britain and France] and the other shareholders away from pursuing.

The other side is that, at the end of the day, the administration has realized it can't pretend that there has been no deleterious impact to humanitarian trade with Iran. They have to take some steps, and one thing to keep in mind is—the fact that the administration launched the Swiss mechanism can be taken as an admission that the normal channels were not functioning properly. It would be pretty hypocritical for the administration to have helped the Swiss launch their mechanism while meanwhile arguing that INSTEX is somehow inappropriate.

On the other hand, I think the Europeans have been very careful to emphasize that INSTEX is not really a sanctions-evasion mechanism. What it's meant to do is allow trade that is humanitarian, so from the U.S. perspective permissible, to continue, but be a little bit less encumbered by the impact of U.S. sanctions on the willingness of banks to facilitate those transactions.

Although, unintentionally, this probably does undermine U.S. sanctions power a little bit. Even if it's transactions that we ostensibly don't want to prevent, it creates a model for avoiding the U.S. banking system entirely.

That's the concern on the part of the Americans.

It's also, implicitly, what the Europeans are saying: "look, if this administration is not going to take a cooperative approach to how they're applying and enforcing sanctions in a way that we can see is hurting the economic interests of allies, then Europe is going to be forced to explore ways to protect its economic sovereignty."

There's been a very robust conversation in Europe, and I think that things are moving in that direction. But the important thing to note is that this is a crisis or challenge of the administration's own making, and really they pushed Europe to this stage, because had they been more forthcoming and helpful in making sure that secondary sanctions were not having these impacts particularly on humanitarian trade, it was unlikely that the Europeans would take that leap and set up a mechanism like this.

But they have, because they were forced to, and now they're seeing the value of it, and in some ways, the train has left the station, and the U.S. is going to have to earn back the trust and cooperation that they were the ones to throw away first.

Do you think that the coronavirus crisis had anything to do with the first transaction, given now that there's a lot more momentum in favor of loosening maximum pressure and a maybe a little less willingness on the American side to punish this, or do you think that this would have taken this long anyways, the timing just worked out like this?

The transaction that was just processed was in the works before the coronavirus crisis really started. I think it's really a coincidence, of course, I think it's positive that the timing is now, because had it not taken place during these sort of difficult situation for Iran, people would have asked, "if not now, then when?"

But at the end of the day, they've been working on this for awhile, and this is one of several transactions that have been lined up, that are in the pipeline. It just happens to be the first to go through.

But obviously the work to find the companies, get them onboarded, and so forth, would have started long before.

Do you think that this mechanism now is going to gain enough momentum to make a dent in Iran's coronavirus crisis, or at this point is it too small to have a significant impact on the crisis of the Iranian healthcare sector?

I think it's important to keep expectations tempered when it comes to INSTEX. It's a project that's been burdened with these really huge political and economic expectations at the outset. At the end of the day, what it is intended to do is make trade a little bit easier for a certain subset of companies that are interested to sell medical supplies and food products to Iran.

I don't think trade volumes are suddenly going to increase so much that this really has this dramatic impact on the obvious shortages and the availability of some medical supplies in Iran today.

However, when we're talking about something like blood treatment—which was the thing that this first shipment that was sent—it's the type of product that, because we're talking about the healthcare infrastructure of the country, the absence of that product would be significant.

Even if this one shipment isn't in-and-of-itself significant, the absence of any of these products is significant in any amount, because we're talking about the well-being of patients.

People will turn up their nose at the size of the transaction, and there will be questions about how much the mechanism can ramp up, but at the end of the day, this is a really significant thing for such a mechanism to be established, and any trade that goes through it is ultimately going to be helping the sub-issues in Iran.

Whether or not at scale, that's still pretty important, given the types of products that we're talking about.