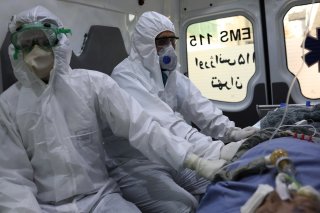 The German government announced on Tuesday morning that it had facilitated the sale of medical goods to Iran under a trade channel previously opposed by the United States.

The United States had long opposed INSTEX, a channel for European-Iranian trade meant to get around U.S. economic sanctions on Iran. But the channel is now up and running, as the death toll from the novel coronavirus pandemic in Iran approaches three thousand.

“France, Germany and the United Kingdom confirm that INSTEX has successfully concluded its first transaction, facilitating the export of medical goods from Europe to Iran,” said a statement by the German Foreign Office. “INSTEX and its Iranian counterpart STFI will work on more transactions and enhancing the mechanism.”

A spokesperson for the U.S. State Department told the National Interest that the United States "has no issues with humanitarian trade so long as it is conducted with strong due diligence measure sto prevent the Iranian regime from hijacking the aid for itself."

It is unclear whether the first INSTEX sale was related to the coronavirus outbreak in Iran, which began in January and has killed at least 2,898 people as of Tuesday morning. The channel was used to sell a German machine used for blood treatment worth €500,000 to an Iranian importer, according to the Wall Street Journal.

INSTEX was established after the Trump administration broke from a 2015 diplomatic agreement with Iran and began imposing sanctions aimed at cutting Iran off from international markets in May 2018. European governments, who remained in the accord, set up a channel in January 2019 to buy and sell food and medicine without using U.S. dollars.

U.S. officials have often criticized INSTEX, and instead touted a “humanitarian channel” in Switzerland that allows banks to process food and medicine sales to Iran under close U.S. supervision. The channel completed its first shipment of medicine to Iran in February 2020, nearly two years after the U.S. pressure campaign began.

Treasury Secretary Steve Mnuchin had warned reporters that “we expect U.S. sanctions to be adhered to” at a July 2019 meeting of the Group of Seven in France.

“We’ve warned INSTEX and others that they will most likely be subject to secondary sanctions, depending on how they use that,” Munichin reiterated in a January press briefing.

Special Representative Brian Hook, the State Department official overseeing Iranian affairs, emphasized at a February breakfast hosted by Al Monitor that INSTEX had not even processed a single transaction.

“Any European company, if given the choice between the Iranian market and the American market—that’s the fastest decision you’ll ever make in your business career,” Hook added. “The EU does more trade with Kazakhstan than it does with Iran.”

This article has been updated to include a response by the State Department.