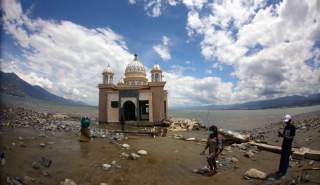 Indonesian president Joko Widodo apparently won his electoral rematch with Prabowo Subianto by a solid if not overwhelming margin. That almost certainly is to the benefit of Indonesia and its neighbors.

Subianto is a putative strongman, made an army general by his father-in-law, the late dictator Suharto. Subianto commanded the brutal Special Forces and was cashiered for having kidnapped regime opponents. He sought political support by encouraging Islamic extremism.

Nevertheless, in response Widodo, informally known as Jokowi, abandoned his more liberal views and appealed to the same intolerant forces. Indonesia’s reputation as home to a tolerant Islamic faith continues to erode.

Indeed, Islamic extremism long has existed barely beneath the surface, ready to burst forth. Two decades ago on the main island of Java I joined the group Christian Freedom International in visiting a Bible school which had been destroyed by a mob. Out of fear of further violence, the local authorities refused to grant permission to rebuild. On the same trip I visited the Moluccan Islands, with a larger than average Christian population, which were roiled by more than two years of violent conflict. I met a militia leader who fought to defend Christian villages—and was killed a couple weeks later.

In 2002 Islamists targeted Australians for their nation’s support of America; the bombing killed 202 people on Bali. I stood in front of Jakarta’s JW Marriott in 2003, after it was bombed by Islamic radicals, ironically killing more Indonesian Muslims than Western Christians (the hotel was hit again a few years later). In 2006 I met a pastor’s wife who lost her leg in a bombing at her church outside of Jakarta. During the same trip I talked with members of a church in Kalimantan, which had been destroyed by their neighbors. They were blocked by the local government from rebuilding the church.

In fact, since 2004 the U.S. Commission on International Religious Freedom has placed Indonesia on its “Tier 2” list for violations of religious liberty. The USCIRF’s latest report noted that “For decades, hardliners and other intolerant groups have had deep connections to and influence on the highest levels of government.” Although advocates of tolerance remain, other elements “have grown more vocal in calling for increasingly conservative interpretations of Islam.”

Indeed, observers see the Arabization of Indonesian Islam, with a rise of Salafism. Moderation and syncretism, accommodating traditional local beliefs, are fading. The New York Times has reported that bureaucrats “steeped in austere Wahhabism draw converts in government prayer halls. Hundreds of Indonesians joined the Islamic State in Syria and Iraq. And hundreds of thousands more cheer for the group on social media.”

Much of the change resulted from Saudi Arabia promoting fundamentalist Wahhabism. Explained the Commission: “Saudi money, such as through the state-owned Saudi Fund for Development, supports Indonesian mosques and schools, and the government provides funds for educational materials and scholarships to study in Saudi Arabia.” One of the most important promoters of intolerance is the Saudi Institute for the Study of Islam and Arabic. It has “nurtured militants linked to terrorist attacks across Southeast Asia” while expanding across Indonesia. Open Doors now ranks Indonesia at number thirty on its World Watch List of the globe’s fifty worst persecutors, according to the New York Times.

Among the problems, reported USCIRF, were regulations which have “politicized the construction of houses of worship and often handed over their fate to the influence of hardliners and other intolerant groups.” Some churches were closed by demonstrators; others were shuttered by local governments despite court decisions affirming that the churches have a legal right to operate. Ahmadis and Shia Muslims also suffered discrimination. The U.S. State Department catalogued a long list of religious liberty violations: imposition of Sharia law, closures of houses of worship, opposition to church construction, forced conversions, violent attacks on churches, blasphemy prosecutions, denial of public services, forced Sunni religious education, discrimination and intimidation.

One of the greatest threats to free religious practice are the blasphemy laws, which are misused in Indonesia, Pakistan and other Muslim nations. The charge is a weapon often deployed against members of minority faiths, with guilt presumed and courts intimidated by demonstrators. Amnesty International counted more than one hundred individuals who were prosecuted between 2005 and 2014. In 2016 a politically motivated case against Basuki Tjahaja Purnama, or Ahok, the Christian governor of Java running for reelection, led to his imprisonment. Fearful over the potential for violence in the case, he abandoned his appeal.

Jokowi won international backing for his perceived liberalism. Indeed, in the 2014 race he was attacked for his relative liberalism: “the opposition camp harped on about Jokowi’s secular approach as a weakness, arguing that he was not devout enough and spreading rumors that he was a closet Christian,” reported the Economist. Widodo made a pilgrimage to Mecca two days before the election to demonstrate his supposed devotion.

His government was expected to be an advocate of religious tolerance. After taking office, however, he quickly abandoned any liberal instincts. Australian National University’s Marcus Mietzner complained that instead of defending pluralism, the president “tried to adopt many of the Islamist themes—and the minorities were the main victims of that move.” Most dramatically, Jokowi remained silent in the persecution of his former deputy, even praying with demonstrators demanding that Ahok be tried.

The 2019 election was a replay of the earlier contest. Widodo benefited from general economic growth, but he could not count on reelection. The high hopes which greeted his first term had ebbed. His progress in fighting corruption was limited; economic investment and reform lagged; the military’s influence had grown; he had undermined free speech by targeting critics; and Islamic radicalism had advanced. Indeed, the Council on Foreign Relations’ Joshua Kurlantzick argued that “Jokowi’s image as a clean politician has been dented by the arrest of one of his political allies allegedly for accepting bribes. The president seems to be ignoring graft by major figures who are willing to support him—and who also stand in the way of real reform of the political system.”

Of course, he was not the first alleged reformer to fall short in that way, basking in the support those whose influence he once promised to curtail. “Perhaps the biggest reversal has been Jokowi’s seemingly effortless embrace of conservative Islam,” noted the Economist. The Western-educated son of a Christian, Subianto ran as a nationalist, populist, and Islamist. By making religion a top issue, he sharply divided the electorate along religious grounds. The president responded in kind.

Kurlantzick noted that “Jokowi has simultaneously embraced some harder-line positions and policies, designed to appeal to more conservative voters—moves that could further entrench the power of Islamist ideas and actors.” Again, candidate Widodo made a last-minute Hajj to Saudi Arabia. He chose as his running mate Ma’ruf Amin, a hard-line Islamist who until his resignation last September headed the nation’s largest Muslim organization, Nahdlatul Ulama. Amin was a strong advocate for limiting religious liberty, and even issued a fatwa against Santa hats. More significantly, he testified against Ahok in the latter’s blasphemy prosecution.

Jokowi won this election by a larger percentage of the vote but carried fewer provinces, as voters polarized along religious lines. He now owes Amin and the conservative Nahdlatul Ulama. Amin is seventy-six years old, so he is an unlikely successor to Jokowi. However, the campaign energized Islamists, who gathered at Subianto’s Jakarta home after hearing of his likely loss. The so-called 212 Movement, which demanded Ahok’s imprisonment, rallied in the capital over Easter weekend. Future protests are possible to further demands to ban alcohol, criminalize gay sex, and impose Shariah law.

The continuing rise in Islamic extremism is likely to affect Widodo’s second-term policies. Worse, it presages a further decline in Indonesia’s religious liberty. Noted Andreas Harsono of Human Rights Watch, “We should be very concerned, because both sides in the campaign have now made human rights and democracy decline.” And Widodo has proved that he is a man of neither principle nor courage, making him unlikely to defend his country from Islamist subversion.

Indonesia is an extraordinarily diverse nation and the world’s third most populous democracy. Led well, it could become a model Islamic society whose people rule themselves and coexist with others. However, to succeed pluralism needs to be defended and nurtured. Jokowi no longer looks to be up to the task. Can such a statesman be elected in the future?