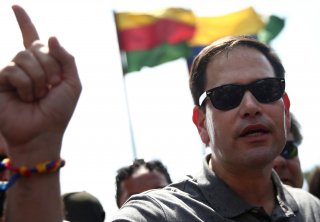 Cuba has long sent teams of doctors to foreign countries as a form of medical diplomacy. U.S. authorities accuse the Cuban government of practicing human trafficking by forcing doctors to work abroad against their will.

But the coronavirus pandemic has pushed desperate U.S. allies to accept Cuban medical teams, putting the United States at odds with some of its traditional allies. Cuban doctors arrived in coronavirus-stricken northern Italy to cheering crowds and praise from local politicians and journalists in late March.

Menendez, the highest ranking Democrat on the Senate Committee on Foreign Relations, penned a letter alongside Rubio condemning the practice.

“Despite the growing body of evidence on the Cuban regime’s trafficking of doctors and medical personnel, we are alarmed that governments such as in Italy, Qatar, South Africa, Argentina, and several Caribbean nations have accepted Cuba’s medical missions in recent months,” the letter reads.

It asks Secretary of State Mike Pompeo to issue a diplomatic message “to host government officials to inform them about the Cuban regime’s forced labor practices.”

Pompeo called the Cuban medical missions “exploitation: a for-profit front used to fund the regime's repression and sow political discord” in a May 1 social media post.

Cuba sends medical teams abroad both free of charge and for a fee. Medical missions are one of the Communist government’s few sources of revenue in the face of a longstanding U.S. economic embargo.

The United Nations Special Rapporteurs on contemporary forms of slavery and trafficking in persons wrote in November 2019 that the Cuban medical missions “could be understood as forced labor.”

The rapporteurs alleged that doctors are forced to work long hours, have some of their wages confiscated, often live under surveillance, and can be punished for trying to leave early.

The Cuban foreign ministry has called the allegations of slavery a “propaganda label conceived by the U.S. government to discredit what is an indisputable moral accomplishment of a developing country.”

U.S. authorities had successfully pushed several Latin American countries to reject Cuban doctors before the pandemic, but now even U.S. allies in Europe are accepting the medical missions, including Italy.

The senators’ dispute with Italy is the latest in a series of clashes between the United States and its European allies over the coronavirus pandemic.

The European Union has condemned U.S. economic sanctions on Venezuela and Iran as an obstacle to the global coronavirus response.

U.S. diplomats were noticeably absent from a European-led conference raising money for coronavirus research on Monday. Trump administration officials refused to explain why.

The United States will commit an additional $130 million to its own global relief efforts, bringing total U.S. coronavirus aid up to $900 million, Pompeo announced on Wednesday.