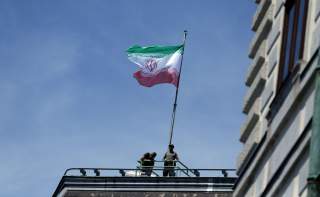 It is customary for pundits to lament how partisanship is destroying U.S. policymaking, but one area remains curiously bipartisan: Democrats and Republicans alike are quick to show their support for an organization publicly dedicated to regime change in Iran.

Late last month in Paris, for example, thirty-three senior U.S. officials and military officers, including Rudy Giuliani and former United Nations Ambassador Bill Richardson, attended a meeting convened by the National Council for Resistance in Iran (NCRI), an offshoot of the Mujahedin-e-Khalq (MEK).

The MEK was founded in 1965 as a hard-left opponent of the secular Shah of Iran. They gained attention in the early 1970s for several acts of terrorism, including attacks against the Shah’s primary patron, the United States. Civilians working for American companies operating in Iran in the 1970s, including Pepsi, PanAm, General Motors and Rockwell International, were all among the MEK’s victims. Unsurprisingly, the MEK was listed as a terrorist organization by the U.S. State Department in 1997.

But, in recent years, the MEK has managed to rehabilitate its image. It switched sides after Saddam Hussein’s overthrow in Iraq, hoping that the United States would perform a similar service in neighboring Iran. The MEK also successfully lobbied the Obama administration to be removed from the terrorist list. Today, the organization routinely feeds information to build support for regime change in Tehran.

This state of affairs is eerily reminiscent of a period in the late 1990s when a bipartisan coalition in Congress—responding to a concerted pressure campaign by Bill Kristol and Robert Kagan’s Project for a New American Century—passed legislation calling for regime change in Iraq. The Iraq Liberation Act, signed into law by President Bill Clinton on October 31, 1998, also provided Iraqi exile groups direct financial assistance from the U.S. government. One of the leading beneficiaries of U.S. taxpayers’ largesse was the Iraqi National Congress (INC). In 2004, the New Yorker’s Jane Mayers concluded that the U.S. government steered more than $100 million to the group over a twelve-year period, with the Bush administration responsible for at least $39 million.

The INC and its leader, Ahmed Chalabi, proved to be one of the leading sources of false information that hawks deployed via a too-credulous media to build support for war with Iraq.

Years later, after U.S. troops had dislodged Saddam Hussein from power, and Chalabi and his cadre of followers were back in the country he had fled as a teenager, he famously boasted “we are heroes in error...What was said before is not important.”

But Chalabi and the INC were more popular in Washington, DC than in Baghdad—or anywhere else in Iraq, for that matter. When Iraqis went to the polls in December 2005, his party secured only 0.5 percent of the vote.

So, to recap, U.S. taxpayers funded the organization whose primary objective was to feed misleading information about the nature of the threat posed by Saddam Hussein. The resulting war claimed over 4,400 American lives and has cost, so far, $2 trillion, with some estimates of the eventual costs approaching $6 trillion. And Chalabi and his INC weren’t able to implement the pleasing, pluralist, vision for Iraq, that they promised. Instead, many tens of thousands of Iraqis have been killed, and millions driven from their homes.

That doesn’t seem like a very good return on investment.

The source of the MEK's funding is murkier, but the organization is flush with cash. MSNBC's Richard Engel determined that Bolton was paid $40,000 for one speech in 2017. Others report that speakers at MEK gatherings receive up to $50,000 per speech.

At last year’s gathering in Paris, Bolton stated categorically “There is a viable opposition to the rule of the ayatollahs, and that opposition is centered in this room today.” “The declared policy of the United States of America,” he continued, “should be the overthrow of the mullahs’ regime in Tehran.”

Bolton skipped the meeting this year, but Giuliani’s work on behalf of the organization has caught people’s attention—and not for the first time. Daniel Benjamin, who coordinated counterterrorism efforts for the Obama administration explained to The Washington Post, “Plenty of us...found just the appearance of support for [an] organization that had American blood on its hands to be outrageous.”

There is a tendency to dismiss the MEK as a fringe group. Ervand Abrahamian, a professor of Iranian history and politics at Baruch College, described it as “a cult organization.” “It’s like the Moonies,” he said to McClatchy.

Except that the Moonies aren’t trying to get the U.S. government to overthrow a foreign government, and John Bolton sits a few doors down from the President of the United States. Ahmed Chalabi would have lusted after the level of access that the MEK’s Maryam Rajavi now has.

That means that Americans might have to rely on the news media to do its job. It could begin by questioning information provided by expatriate advocates of regime change in Iran.

When the New York Times reviewed its coverage of the Iraq War in 2004, the editors called out Chalabi by name as a source for many inaccurate or misleading articles. They noted that "information" in their stories "that was controversial then, and seems questionable now, was insufficiently qualified or allowed to stand unchallenged." The worst instances "shared a common feature," the Times editors continued. “They depended at least in part on information from a circle of Iraqi informants, defectors and exiles bent on ‘regime change’ in Iraq.”

Rob Reiner’s feature film, “Shock and Awe,” tells the story of the Knight Ridder DC news bureau, one of the few outfits who, when presented with similar information from Iraqi exiles, and Bush administration officials, had the good sense to ask "Is it true?" Equally important, Knight Ridder reporters and editors dared to stand by their reporting when post-9/11 bloodlust cast full-throated support for the war as synonymous with patriotism—and skepticism as akin to treason.

Americans must wait to see which direction the U.S. news media will go in 2018, but I hope that they will be more like John Walcott, Jonathan Landay, Warren Strobel, and Joe Galloway, and less like Judith Miller.

Christopher Preble is the vice president for defense and foreign policy studies at the Cato Institute and blogs for The Skeptics at The National Interest.

Image: The national flag of Iran is seen on top of the Austrian Chancellery during the visit of President Hassan Rouhani in Vienna, Austria July 4, 2018. REUTERS/Lisi Niesner​