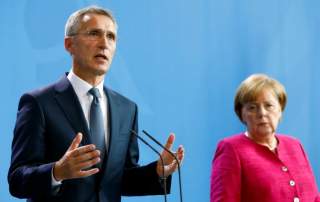 One discordant subject was Germany’s military outlays, or lack thereof. Berlin had promised to hike expenditures to two percent of GDP by 2024—subsequently downgraded to 1.5 percent—but new budget figures indicated that the real amount would be lower still. Germany’s government evidently lacks the political will to put Europe’s defense first.

Without a hint of shame, the German Foreign Office responded to criticism by tweeting: “Germany wholeheartedly supports @NATO. We will stand by our commitments. True solidarity is measured in terms of commitment, not Euros.” Unfortunately, a barrage of bullets and bombs would be more effective than mere statements of commitments against an aggressor.

Germany has been a “problem” for a century and a half. Originally Berlin was overly-militarized and insufficiently restrained. These failings were on dramatic display in World War II. No wonder General Hastings Ismay, the former Churchill aide tapped to serve as NATO’s first secretary general, allowed that one purpose of the alliance was to “keep the Germans down.”

Moreover, decades later when the Berlin Wall came crashing down, the venerable Margaret Thatcher was not alone in opposing German reunification. Some Europeans saw the specter of the Fourth Reich, and one wit explained that he loved Germany so much he wanted two of them.

However, the Federal Republic’s militaristic heritage has not stirred in the years since; even what passes for Germany’s new nationalistic, xenophobic right offers no politician who hints at being Adolf Hitler reincarnated. Certainly, neither avuncular Helmut Kohl, the first chancellor of a united Germany, nor Angela Merkel, who has dominated German politics for more than a decade, acted the part of dictator-wannabe.

Far from clamoring to create a military capable of turning the country into a Weltmacht, the German people seemed to forget the reason for establishing armed forces. According to a Pew Research Center poll, four of ten Germans don’t want to defend NATO allies from attack. For years among the Bundeswehr’s strongest advocates were social service agencies, which benefited from draftees choosing alternative service. Furthermore, in January the Bundeswehr dispatched mountain troops to Bavaria to… shovel snow from the roofs of homes after a big winter storm.

Berlin’s lack of interest in all things military wouldn’t much matter if the United States wasn’t expected to carry the resulting burden. However, Europeans are counting on America to contribute dollars, lots of them, not just professions of “commitment.” Of course, Germany is not the only free, or more accurately cheap, rider. Among major states, the United Kingdom does best, though it engages in a bit of statistical legerdemain to hit two percent of GDP. France comes close. Other nations with sizeable economies include Italy, which barely breaks one percent, and Spain, which doesn’t even meet that minimal level.

Yet Germany’s preference to contribute love and kisses rather than manpower and material to Europe’s defense is particularly significant. The Federal Republic has the largest population and economy in Europe. It benefited the most from the defense efforts of others during the Cold War and emerged as a continental leader. For Beijing to continue to rely on other states shows a distinct lack of the solidarity in which German officials claim to believe.

Now Berlin appears to be walking back from even its unduly modest military commitments. The Merkel government affirmed NATO’s objective of spending two percent of GDP on the armed forces by 2024 but recently said that wouldn’t happen until 2030. However, Germany insisted, it was still fulfilling its pledge in spirit since it would be “moving toward” the goal. Outlays would be 1.5 percent by 2024, Germany promised.

Alas, that was then. German outlays ran a dismal 1.27 percent last year and are supposed to hit 1.37 percent in 2020. But Berlin recently projected that number falling to 1.25 percent in 2023. Foreign Minister Heiko Maas insisted that Germany still would meet its commitments, but the prospect of hitting 1.5 percent, let alone 2.0 percent, in a few years, appears to be infinitesimal.

In Berlin’s defense, some German analysts pointed to the steady, though small, increase in military outlays since 2014. Through last year, real spending had increased by almost 12 percent. But that mainly reflected robust economic growth. As a percentage of GDP outlays barely increased, from 1.18 percent to 1.24 percent. Recent expenditure hikes look even less impressive when considering per capita spending. Last year Washington spent $1898 per person on the military. Germany contributed $589. That was up only $56 since 2014.

Overall outlays are important. However, noted Defense & Security Monitor, “the greater concern for core security partners such as France and Britain remains the operational shortcomings of the Bundeswehr.” The Atlantic Council’s Jorge Benitez said simply: “The readiness of the Germany military is abysmal.”

In January, Bundestag Military Commissioner Hans-Peter Bartels issued a new report which found few of the military’s shortcomings to have been fixed, despite increased expenditures. He complained: “There is neither enough personnel nor materiel, and often one confronts shortage upon shortage.” He urged the government, of which his Social Democratic Party is a member, to speed procurement, insisting that “Soldiers need this equipment now to do their jobs.”

The Defense & Security Monitor pointed to a lack of available combat and transport aircraft, helicopters, operational submarines, and naval frigates. Fewer than 30 percent of German Eurofighters were ready for action; fewer than 20 percent of combat helicopters were airworthy. None of Germany’s subs could be deployed. Added DSM, “The Army’s main battle tank, the Leopard 2, also suffers from a lack of spare parts and sufficient work-up to bring the fleet into operational readiness.”

The army borrowed equipment for deployments. There are shortages of everything from body armor to winter clothing. Recruitment lags and many roles go unfilled. NATO officials recently discovered that German soldiers stationed in Lithuania used cell phones to communicate since secure radios were not available. All told, delicately concluded DSM, “These conditions render German contributions to security missions under an EU- or NATO-led mandate less than optimal, as its troop deployments lack proper logistical support and effective firepower capability.”

In Afghanistan, German troops had to rely on civilian helicopters, while Bundeswehr helicopter pilots surrendered their flying licenses since they lacked adequate training time. German forces there also were dependent on U.S. transport and MedEvac helicopters and Ukrainian cargo planes. Internal assessments in Afghanistan concluded “German soldiers mostly don’t know how to use their weapons” and they “have no or little experience driving armored vehicles,” including not knowing how to avoid roadside bombs. Berlin attempted to protect its troops by imposing numerous “caveats” on their deployment in combat.

Allies were familiar with Germany’s difficulties. In 2017, the Rand Corporation figured that it would take Berlin a month to mobilize a heavy armored brigade for dispatch to the Baltics—and would require denuding other units of equipment. Years before that, Britain’s Daily Mail reported with malicious delight: “They drink too much and they’re too fat to fight, that’s the damning conclusion of German parliamentary reports into the country’s 3,500 troops stationed in Afghanistan.” At the time, Berlin acknowledged that a greater percentage of soldiers than of the overall population was overweight.

In January DeutscheWelle affirmed that “The German Bundeswehr is still underequipped, understaffed and overly bureaucratic.” This is why German officials admit that much more needs to be done. However, with few evident threats facing the Federal Republic to justify such expenditures, military spending is likely to become an increasingly partisan issue. The grand coalition between Social Democrats and Christian Democrats is fraying, and the former, desperate to distinguish themselves, appear likely to make defense outlays an issue in the next election.

Even if Merkel’s CDU continues to dominate Germany’s ruling coalition, it is not likely to find public support for nearly doubling military outlays. But if Berlin fails to fulfill its commitment, transatlantic relations will only get more acrimonious. During the seventieth anniversary festivities, Vice President Mike Pence insisted: “Germany must do more.” After all, “It is simply unacceptable for Europe’s largest economy to continue to ignore the threat of Russian aggression and neglect its own self-defense and our common defense.”

The problem is twofold. First, few Europeans living in “Old Europe,” as Donald Rumsfeld characterized the west, fear for their international safety. The only plausible threat is Russia, and no one, outside of the most deranged neoconservative, imagines Moscow sending a revived Red Army on a joyride across Europe. The cost of “victory,” whatever that means, would be too high, the risks of war against nuclear-armed powers (Britain and France along with America) would be beyond imagination. For most Europeans, the military appears to be a quaint anachronism that provides some nicely uniformed fellows to showcase visiting dignitaries.