The Philippines "Mutual" Defense Treaty Isn't Really Mutual at All 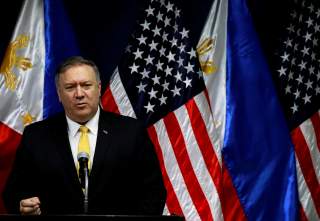 Confronting the PRC in East Asia would require an ongoing and significant military build-up. However, Helprin’s horror is unlikely to occur for the same reason that it is becoming increasingly hard for Washington to force Beijing to look out onto an American lake. The cost of dominating the seas near China is already high and is much more than the price of the PRC simply deterring America. Furthermore, Washington’s attempts to overcome Beijing in its nearby waters would only encourage it to increase its military capabilities. Imagine what it would take for Beijing to place an overwhelming force off of America’s Western shore. China would have to dismantle U.S. air, missile, and naval capabilities—it would be too costly. Besides, Washington could deter the PRC with far fewer weapons than it currently possesses. The world just isn’t as dangerous as claimed.

Washington has too many allies, including the Philippines. The latter is a net cost, committing America to its defense while adding little to America’s security. Washington should clarify—and limit—its ambiguous commitment. Finally, Washington must launch a broader rethink about where and when the United States is prepared to go to war in the Asia-Pacific.

Doug Bandow is a Senior Fellow at the Cato Institute. He is a former Special Assistant to President Ronald Reagan and the author of several books, includingThe Politics of Plunder: Misgovernment in Washington.