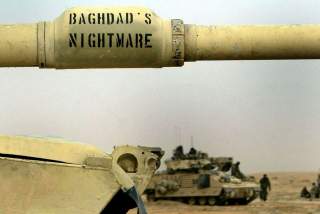 As older generations inevitably pass on, new generations with new ideas will shape American foreign policy. Given that the Baby Boomers will be smaller than Gen Z in about a decade, and that Millennials are the largest generation yet, Millennials could determine the nation’s policy soon. For instance, a June 2018 Chicago Council on Global Affairs study found that each new generation is less in favor of military intervention than their parent's generation, while support for international cooperation remains high across generational lines. So while nothing is guaranteed in American politics, those in favor of peace and non-interventionism should be cautiously optimistic about the future of U.S. foreign policy.

Still, some worry that Millennials will not vote, and that even if they do, that their votes won’t be focused on foreign policy. For the first concern, Asma Khalid, a staff writer at NPR, notes that although Millennials have the same voting power as Baby Boomers, only 46 percent of Millennials voted in 2012. However, she notes that Baby Boomers went through the same phase of low voting activity when they were younger, yet now vote at much higher rates. A million more Millennials voted in 2016 than in 2012, so it’s likely that their future turnout may be higher as well.

However, another worry is more prescient. In the last few decades, the president has taken on a stronger domestic role, leaving foreign policy in the hands of advisors and military generals. This led to the creation of what former Obama advisor Ben Rhodes called "the Blob” in foreign policy—a name given to high-level supporters of the Iraq invasion during President George W. Bush Jr.’s administration.

Doug Bandow, a senior fellow at the Cato Institute and former Reagan aide, notes that the hostility that greeted President Trump's stated desire in 2017 to bring troops home from Afghanistan. Bandow wrote, "his aides, who obviously serve the Blob first and him second, if that, pummeled him on the importance of combating all manner of dire threats, from Assad to Turkey, Iran, Russia, and maybe even the zombie apocalypse.” The Blob exists to perpetuate the Blob, giving those in favor of non-interventionism plenty of reasons to worry.

However, public opinion is becoming more important in foreign policy. According to Pew Research, terrorism has surpassed the economy as a political priority for American voters, and

international issues are starting to take on more importance. After all, the economy, which ranks second, is global in nature. Furthermore, because Millennials think of themselves as part of the worldwide community, they are more likely to vote on issues like trade. And for the most part, the Chicago Council study found that younger people support free trade and international cooperation. That means Millennials can be expected to vote on foreign policy, especially regarding trade and terrorism.

To survive, the "Blob" will have to up their game, and explain why the United States should stay in conflicts overseas. They'll have to shift their positions at least somewhat to remain relevant, because even Millennial Republicans are more skeptical of interventionism than older generations, and tend more toward peace than war.

Right now, Millennials have 20 percent less representation than they would if representation were based on population. For instance, there are just five congressmen who represent that generation in office. This, however, is likely to change. Nearly two million Baby Boomers die every year, and even the oldest Millennials at thirty-seven have not yet reached the average age for election into Congress, which is roughly fifty years old.

As Millennials begin to assume political power, foreign policy could become more focused on trade and aid, rather than interventionism and war. There’s reason to be optimistic, as the future looks bright for those fighting for peace.

Image: A US Army 3rd Infantry M1A1 Abrams tank with "Baghdad's nightmare" written on its cannon passes Infantry troops relaxing near the Euphrates river as hundreds of armored vehicles push towards the outskirts of Baghdad early April 6, 2003. More and more US forces from the 3rd Infantry division are pushing to the southern outskirts of Iraq's capital Baghdad. PP03040015 Pictures of the month April 2003. Pictures of the Year 2003 REUTERS/Kai Pfaffenbach PP04020111 KP​