Pompeo Arrives In Mexico At A Turbulent Time For Latin America 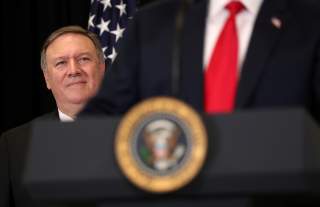 Mike Pompeo, secretary of state, is the highest-ranking official yet to meet with Andrés Manuel López Obrador, or AMLO as he is popularly called, the president-elect of Mexico. The secretary arrived Friday in the country, alongside Kirstjen Nielsen, the Homeland Security chief ostensibly charged with building President Trump’s border wall. Pompeo’s arrival comes at a time when AMLO is seen as the left-wing, Latin American answer to Trump; it also comes as the Central American humanitarian situation, as well as the political collapse in Venezuela, threaten to vault the region from an afterthought in Washington to the front pages. In a sign of how seriously the administration is now taking the region, Senior Counselor Jared Kushner, the president’s son-in-law, and Treasury Secretary Steven Mnuchin, a Trump favorite, are joining Pompeo and Nielsen.

Obrador takes over in December, an extremely lengthy transition period, as pointed out by the State Department Thursday. “The Mexican political transition is long in comparison to what we have here in the United States – about five months,” a senior U.S. State official briefing reporters said.

But the official implicitly linked the region to core concerns of the president’s base; the need for a steady transition is paramount.

“Our effort to combat transnational criminal organizations in Mexico is directly linked to our concern about the opioid crisis in our country and the flow of drugs across our border,” the senior official said.

The U.S. delegation’s visit also comes at a time of two major developments that concern the region.

First, in their initial phone call earlier this month, Obrador floated to Trump a possible deal: significant Mexican assistance in stemming the flow of refugees from Central America in exchange for a hefty aid package from the United States.

Obrador reportedly sees such an exchange as an alternative to Trump’s border wall, which eighteen months into his presidency, remains unconstructed. Obrador wrote a book called “Listen up, Trump!” But so, far he’s playing nice. Realpolitik is at a play, as well as an attempt by some in Trump’s orbit to work with AMLO, a kindred in the global populist surge that has roiled international politics in recent years. “I remember early in Trump admin [Stephen] Bannon excitedly telling me this guy would be the next leader of Mexico. And me thinking he was nuts,” Axios reporter Jonathan Swann tweeted. “Huge victory, game changer,” Bannon told The National Interest, upon his victory. While conceding that he could be a “big problem” and his “economics” are “terrible,” Bannon told me his anti-establishment credos are laudable and his anti-corruption efforts and his “personal austerity” are “inspiring.”

Second, Pompeo’s visit comes as news reports have broken that President Trump seriously inquired about an invasion of Venezuela last summer. The reports come as the administration, whose efforts against Iran and North Korea are well-documented, pursues a quietly, quite hawkish line against Venezuela, a third theater, as well. Pompeo called for Caracas to be tossed from the Organization of American States earlier this year.  “The Maduro regime is increasingly delegitimized and isolated,” says Eric Farnsworth, a former State official under Clinton, and Washington head of the Council of the Americas. “Having said that, sanctions on their own are unlikely to cause the government to leave office, and positive change cannot come to Venezuela with the current leadership in place. As a result, the use of force will likely continue to be an option that is raised from time to time as a potential means to restore the democratic path to Venezuela.”

Even some restrainers have backed a harder line, though would they likely balk at an outright invasion. “Secretary Pompeo’s call to oust Venezuela from OAS makes sense and should be heeded by the other member states,” Benjamin Friedman of Defense Priorities told me last month. But, he cautioned: “It is difficult for the United States and other countries to help Venezuela without deepening its misery. Banning its oil sales, for example, would starve its regime of revenue but also would probably literally starve its people, who are already suffering enough. U.S. covert aid to Madura opponents could help but threatens to discredit them.” Still,  a “better than Syria” line of an argument is a novel, interesting one in an administration increasingly stacked with national security hawks.

But here, AMLO would be deeply problematic. Venezuela’s neighbors -- Argentina, Colombia, among others -- are mostly run by conservative governments. While not proponents of Washington-led regime change, they’re friendly enough with a U.S. administration deeply unpopular in the region; Trump dined with Brazilian President Michel Temer, Colombian President Juan Manuel Santos, Panamanian President Juan Carlos Varela and Peruvian President Pedro Kuczynski last September in New York ahead of his fiery address to the U.N. General Assembly. A senior White House official told Voice of America News then that the “focus” was “indeed Venezuela — restoring the democracy and supporting the people.” Outgoing Mexican President Enrique Pena Nieto was a fellow traveller of this cohort, explicitly condemning Caracas. But Obrador, a nationalist, has showed more reticence. “We’re going to apply the foreign policy of non-intervention of self-determination of nations,” he said on Maduro. “Non-intervention” is a longstanding, nominal staple of Mexican foreign policy, but his emphasis of it vis a vis Venezuela has struck observers.

Regardless, the trip and the “full” agenda on tap, as emphasized by the State Department, for Pompeo and others belies an administration that is paying great attention to the region even if the U.S. media is generally not--flare-ups about ICE and border separations excepted. As I reported last year, a source deeply familiar with Chief of Staff John Kelly’s time as the head of U.S Southern Command in Miami, says Kelly fretted that many countries in the region could collapse in the coming years.

Perhaps President Trump is preparing for a rainy day.

Curt Mills is a foreign-affairs reporter at the National Interest . Follow him on Twitter:@CurtMills.