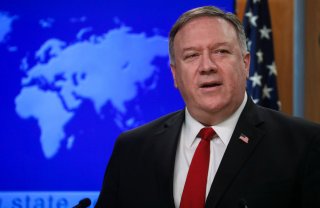 China has been expanding its influence worldwide by providing aid to virus-stricken countries, including U.S. allies in Europe. The United States is now firing back its own salvo, pledging hundreds of millions of dollars to global coronavirus relief efforts.

“Thanks to the unmatched generosity of the American people and the efforts of the U.S. government, the United States has continued to lead the world’s public health and humanitarian response to the COVID-19 pandemic,” Pompeo said in a statement, using an acronym for the novel coronavirus disease. “Through decades of U.S. global leadership in health and humanitarian assistance, we know that smart and strategic investments have proven critical to protecting the homeland.”

He stated that the money will be spent on “health, humanitarian, and economic assistance,” in addition to $274 million that has already been spent.

Pompeo’s announcement came as traditional U.S. rivals have used coronavirus aid to boost their own standing and thumb their noses at Washington.

The Russian Air Force airlifted a planeload of life-support machines and other medical goods into New York, the epicenter of the coronavirus outbreak in the United States, last week. It was later revealed that the aid was paid for by a Russian state-owned fund under U.S. sanctions.

But the powerhouse of medical diplomacy during the pandemic has been China.

Beijing has unleashed an aid bonanza, shipping protective equipment and test kits to U.S. allies and foes alike. Much of it has come from Jack Ma, founder of the gargantuan online retailer Alibaba.

Ma has even sent thousands of test kits and masks to the United States itself.

Many countries have accused China of sending faulty test kits and productive gear, but the images of massive aid shipments have bolstered China’s reputation as the country fights a war of words with the United States.

The relative loss of U.S. prestige has become a potential liability for President Donald Trump as the country enters an election year.

“Our government’s ability to respond effectively has been undermined by hollowing out our agencies and disparagement of science and our ability to drive a global response is dramatically, dramatically undercut by the damage Trump has done to our credibility and our relationships around the world,” former Vice President Joe Biden, the Democratic candidate for President, said in a March 12 speech.

He promised to “build American leadership and rebuild it to rally the world to meet global threats that we are likely to face again.”

“This is a time when America should show leadership,” Rep. Ro Khanna (D–Calif.) told the National Interest last month.

Pompeo, however, maintained that the United States is still a global leader in public health.

“The United States is the undisputed leader in the provision of health and humanitarian aid, around the world,” he said.