Pompeo: China Will Be ‘True Strategic Competitor’ After Coronavirus 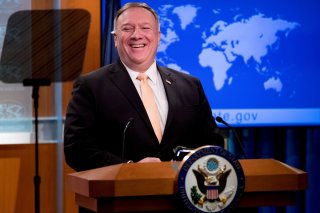 U.S. Secretary of State Mike Pompeo said that China will “continue to be…a true strategic competitor for the United States” at a Wednesday roundtable with Asian media outlets.

The novel coronavirus disease (COVID-19) pandemic has strained the already-tense relationship between the United States and China in recent weeks. The two Pacific powers have traded accusations of blame as the highly-contagious viral pneumonia outbreak overwhelms healthcare systems around the world.

“Just as we went into this moment of crisis, we will continue to find every opportunity to work alongside China,” Pompeo told reporters. “But there are also immense challenges with China, places where the President has identified where reciprocity doesn’t exist. We’ve seen that in trade. We’ve seen that with respect to how journalists are treated, freedom of information, how it flows across borders and across the region.”

The chief U.S. diplomat said that the country has “learned some things about America’s need to ensure that we have the right resources that we can maintain for moments just like this one as well.”

America has faced shortages of life-support machines, personal protective equipment, and other critical goods as the global crisis exposes cracks in both U.S. preparedness and global supply chains.

The Chinese foreign ministry has accused the U.S. military of engineering the novel coronavirus, which first emerg

ed in Wuhan, China in 2019. Iranian politicians have cited these conspiracy theories in domestic debates over whether to accept foreign aid.

U.S. officials told Bloomberg on Wednesday that U.S. intelligence agencies believe that Beijing has published “intentionally incomplete” statistics, concealing the scale of its own coronavirus outbreak.

Pompeo’s State Department has also accused American journalists of spreading “Chinese and Russian propaganda” about the U.S. economic pressure campaign against Iran, which European officials and American lawmakers have blamed for worsening the coronavirus outbreak in the Middle East.

China expelled almost all major American newspapers from the country on March 17, accusing them of displaying “ideological prejudice.”

“We thought that was a bad thing not only because we believe deeply here in the United States in freedom of information but because it will reduce the capacity for all of us to understand what’s happening not only in China but these reporters reporting throughout the region to make sure that we understand what’s happening throughout the region,” Pompeo said.