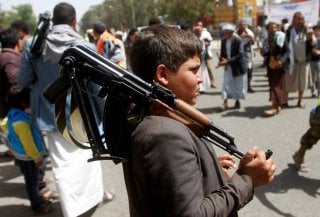 The Saudi-led coalition suddenly announced its decision to begin a ceasefire early on Thursday, the first reprieve to a five-year civil war. Ending the Yemeni Civil War and the U.S. military intervention in Yemen has been a long time cause for foreign policy progressives in the United States.

Saudi Arabia’s decision was in response to a United Nations call for a ceasefire in light of the novel coronavirus pandemic. (No cases have been recorded in Yemen, but scores of Saudi royals and workers alike have been infected.) The United Nations and Houthi rebels initially welcomed the announcement, although a Houthi spokesman later called the truce a "media maneuver" and accused the coalition of violating it.

“A cessation of hostilities in Yemen can only be a first step,” the Thursday letter from fifty-nine organizations said. “Yemenis need a durable ceasefire, a comprehensive and inclusive political settlement to the current conflict, unencumbered access to humanitarian aid and commercial imports, and accountability for the violations all sides have committed during this war.”

Freedom Forward, a group that works to end U.S. alliances with undemocratic governments, signed the letter, as did its sponsor, the progressive Center for International Policy.

So did Win Without War, a progressive think tank that recently spearheaded a push by progressive and moderate Democrats for a coronavirus reprieve from the Trump administration’s “super maximum economic pressure” campaign against Iran.

“It’s a good first step—and an overdue step from the coalition—to implement a unilateral ceasefire,” said Kate Kizer, policy director at Win Without War. “Given its role in the conflict, the U.S. should be throwing its full weight behind pushing for all parties to agree to a ceasefire…and push for inclusive negotiations for a resolution to the conflict.”

Kizer also called for the Trump administration to restore humanitarian aid to Yemen that had been cut in March.

U.S. forces have provided the Saudi-led coalition with targeting assistance, intelligence, and mid-air refueling. Progressives inside the United States have criticized U.S. involvement in the war effort as part of a broader backlash against the U.S.-Saudi relationship.

Both houses of Congress, including the Republican-controlled Senate, voted in April 2019 to withdraw U.S. forces from the Saudi-led war effort. It was the first-ever resolution passed under the War Powers Act of 1973, although President Donald Trump eventually vetoed it.

Rep. Ro Khanna, a progressive Democrat from California and one of the main sponsors of the 2019 war powers resolution, praised the ceasefire in a social media post.

“A ray of light in the time of COVID-19: a ceasefire was agreed to in the Saudi war in Yemen,” he wrote, using an acronym for the novel coronavirus disease. “The US must ensure that this is the beginning of the end of the world’s largest humanitarian crisis.”

He added that the Office of the Special Envoy of the Secretary-General for Yemen “was essential to secure this life-saving agreement.”

Sen. Chris Murphy (D–Conn.) had been another major voice in Congress against the U.S. involvement in Yemen.

“After five years of war, we’re glad to see the first nationwide ceasefire announced by the Saudi-led coalition go into effect,” Murphy told the National Interest alongside Mitt Romney (R–Utah) in a joint statement. “Following this announcement, all parties should move forward with negotiations under the auspices of UN Special Envoy Martin Griffiths to permanently end hostilities and establish a framework for a broad-based political settlement.”

This article has been updated to reflect a subsequent statement by a Houthi spokesperson.