The Tragedy of Donald Trump: His Presidency Is Marred with Failure 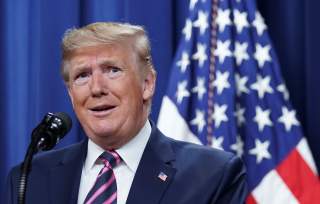 North Korea may have been the one issue on which President Donald Trump apparently listened to his predecessor, Barack Obama, when he warned about the serious challenge facing the incoming occupant of the Oval Office. Nevertheless, Trump initially drove tensions between the two countries to a fever pitch, raising fears of war in the midst of proclamations of “fire and fury.” Then he played statesman and turned toward diplomacy, meeting North Korea’s supreme leader, Kim Jong-un, in Singapore.

Today that effort looks kaput. The North has declared denuclearization to be off the table. Actually, few people other than the president apparently believed that Kim was prepared to turn over his nuclear weapons to a government predisposed toward intervention and regime change.

Now that this Trump policy is formally dead, and there is no Plan B in sight, Pyongyang has begun deploying choice terms from its fabled thesaurus of insults. Democrats are sure to denounce the administration for incompetent naivete. And the bipartisan war party soon will be beating the drums for more sanctions, more florid rhetoric, additional military deployments, new plans for war. Sen. Lindsey Graham (R-SC) already has dismissed the risks since any conflict would be “over there,” on the distant Korean Peninsula. At which point Trump’s heroic summitry, which offered a dramatic opportunity to break decades of deadly stalemate, will be judged a failure.

If the president had racked up several successes—wars ended, peace achieved, disputes settled, relations strengthened—then one disappointment wouldn’t matter much. However, his record is an unbroken string of broken promises, opportunities squandered, principles violated, and intentions abandoned.

There is no relationship more important than that between the United States and the People’s Republic of China. Despite Trump’s supposed friendship with China’s Xi Jinping, the trade war rages to the detriment of both countries. Americans have suffered from both the president’s tariffs and China’s retaliation, with no end in sight. Despite hopes for a resolution, Beijing is hanging tough and obviously doubts the president’s toughness, given the rapidly approaching election.

Beyond economics, the relationship is deteriorating sharply. Disagreements and confrontations over everything from geopolitics to human rights have driven the two countries apart, with the administration lacking any effective strategy to positively influence China’s behavior. The president’s myopic focus on trade has left him without a coherent strategy elsewhere.

Perhaps the president’s most pronounced and controversial promise of the 2016 campaign was to improve relations with Russia. However, despite another supposedly positive personal relationship, the Trump administration has applied more sanctions on Moscow, provided more anti-Russian aid to Ukraine, further increased funds and troops to NATO Europe, and sent home more Russian diplomats than the Obama administration.

Worse, Washington has made no serious effort to resolve the standoff over Ukraine. No one imagines Moscow returning Crimea to Ukraine or giving in on any other issue without meaningful concessions regarding Kiev. Instead of moderating and minimizing bilateral frictions, the administration has made Russia more likely today than before to cooperate with China against Washington and contest American objectives in the Middle East, Africa, and even Latin America.

Although Trump promised to stop America’s endless wars, as many—if not more—U.S. military personnel are abroad today as when he took office. He increased the number of troops in Afghanistan and is now seeking to negotiate an exit that would force Washington to remain to enforce the agreement. This war has been burning for more than eighteen years.

The administration has maintained Washington’s illegal deployment in Syria, shifting one contingent away from the Turkish-Kurdish battle while inserting new forces to confiscate Syrian oil fields—a move that lacks domestic authority and violates international law. A few hundred Americans cannot achieve their many other supposed objectives, such as eliminating Russian, Iranian, and other malign influences and forcing Syria’s President Bashar al-Assad to resign or inaugurate democracy. However, their presence will ensure America’s continued entanglement in a conflict of great complexity but minimal security interest.

The Saudi government remains corrupt, incompetent, repressive, reckless and dependent on the United States. Only Washington’s refusal to retaliate against Iran for its presumed attack on Saudi oil facilities caused Riyadh to turn to diplomacy toward Tehran, yet the president then increased U.S. military deployments, turning American military personnel into bodyguards for the Saudi royals. The recent terrorist attack by the pilot-in-training—presumably to join his colleagues in slaughtering Yemeni civilians—added to the already high cost of the bilateral relationship.

The administration’s policy of “maximum pressure” has proved to be a complete bust around the world. As noted earlier, North Korea proved unwilling to disarm despite the increased financial pressure caused by U.S. sanctions. North Koreans are hurting, but their government, like Washington, places security first.

Russia, too, is no more willing to yield Crimea, which was once part of Russia and is the Black Sea naval base of Sebastopol. Several European governments also disagree with the United States, having pressed to lighten or eliminate current sanctions. The West will have to offer more than the status quo to roll back Moscow’s military advances.

Before Trump became president, Iran was well contained, despite its malign regional activities. The Islamic regime was hemmed in by Israel and the Gulf States, backed by nations as diverse as Egypt and America. The Joint Comprehensive Plan of Action, or JCPOA, sharply curtailed Iran’s nuclear activities and placed the country under an intensive oversight regime. Now Tehran has reactivated its nuclear program, expanded its regional interventions, interfered with Gulf shipping, and demonstrated its ability to devastate Saudi oil production. To America’s consternation, its Persian Gulf allies now are more willing to deal with Iran than before.

Additionally, the Trump administration has largely destroyed hope for reform in Cuba by reversing the Obama administration’s progress toward normalizing relations and discouraging visits by—and trade with—Americans. The entrepreneurs I spoke to when I visited Cuba two years ago made large investments in anticipation of a steadily increasing number of U.S. visitors but were devastated when Washington shut off the flow. What had been a steadily expanding private sector was knocked back and the regime, with Raoul Castro still dominant behind the scenes, again can blame America for its own failings. There is no evidence that extending the original embargo and additional sanctions, which began in 1960, will free anyone.

For a time, Venezuela appeared to be an administration priority. As usual, Trump applied economic sanctions, this time on a people whose economy essentially had collapsed. Washington threatened more sanctions and military invasion but to no avail. Then the president and his top aides breathed fire and fury, insisting that both China and Russia stay out, again without success. Eventually, the president appeared to simply lose interest and drop any mention of the once urgent crisis. The corrupt, repressive Maduro regime remains in power.

So far, the president’s criticisms of America’s alliances have gone for naught. Until now, his appointees, all well-disposed toward maintaining generous subsidies for America’s international fan club, have implemented his policies. More recently, the administration demanded substantial increases in “host nation” support, but in almost every negotiation so far the president has given way, accepting minor, symbolic gains. He is likely to end up like his predecessor, whining a lot but gaining very little from America’s security dependents.

Beyond that, there is little positive to say. Trump and India’s Narendra Modi are much alike, which is no compliment to either, but institutional relations have changed little. Turkey’s incipient dictator, Recep Tayyip Erdogan, receives a free pass from the president for the former’s abuses and crimes. But even so Congress is thoroughly arrayed against Ankara for sins both domestic and foreign.

The president’s aversion to genuine free trade and the curious belief that buying inexpensive, quality products from abroad is a negative has created problems with many close allies, including Canada, Mexico, Japan, South Korea, Australia, and multiple European states. Perhaps only with Israel are Washington’s relations substantially improved, and that reflects the president’s abandonment of any serious attempt to promote a fair and realistic peace between Israelis and Palestinians.

This is an extraordinarily bad record after almost three years in office. Something good still might happen between now and November 3, 2020. However, more issues are likely to get worse. Imagine North Korean missile and nuclear tests, renewed Russian attempts to influence Western elections, a bloody Chinese crackdown in Hong Kong, increased U.S.-European trade friction, more U.S. pressure on Iran matched by asymmetric responses, and more. At the moment, there is no reason to believe any of the resulting confrontations would turn out well.

Most Americans vote on the economy, and the president is currently riding a wave of job creation. If that ends before the November vote, then international issues might matter more. If so, then the president may regret that he failed to follow through on his criticism of endless war and irresponsible allies. Despite his very different persona, his results don’t look all that different from those achieved by Barack Obama and other leading Democrats.

Doug Bandow is a senior fellow at the Cato Institute.  He is a former special assistant to President Ronald Reagan and the author of several books, including Foreign Follies: America’s New Global Empire.