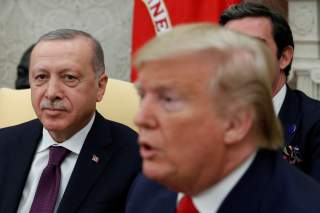 It is hard to imagine a less appropriate visitor or time. Turkey’s President Recep Tayyip Erdogan is journeying to Washington. He has guided his nation, a one-time valued ally, far from America’s principles and practices. President Donald Trump’s view of Erdogan as a “friend” makes Ankara’s drift more dangerous.

Turkey would not be invited to join the transatlantic alliance today. It has abandoned even the pretense of liberal democracy. Once viewed as a responsible Islamic model, the Turkish republic is turning into a soft dictatorship.

Ankara always was the odd man out in NATO: poor, Islamic, and at best quasi-free and -democratic. However, during the Cold War the United States was willing to overlook Turkey’s limitations and failings to bolster Western Europe’s southeast flank. That nation also offered a convenient outpost in the Middle East. The hyper-nationalistic population proved hostile to Washington, but the military, which wielded a not-so-subtle veto over the country’s politicians, ensured that policy remained on Washington’s course.

However, the secular nationalist doctrines known as Kemalism, named after the country’s founder, gradually broke down in the face of increasingly well-organized Muslims determined to live out their faith more publicly. As the economy stalled and exhausted establishment parties imploded, the Justice and Development Party, or AKP, rose along with its founder, former Istanbul Mayor Erdogan. The AKP won a dramatic national victory in 2002 and has ruled ever since.

For a time, Prime Minister Erdogan followed a seemingly liberal agenda: he kept the military in its barracks, aimed for entry in the European Union, and ended many nationalist strictures. Even liberals—in the broadest sense—and feminists lauded progress under his leadership.

However, as the 2000s ended a new Erdogan emerged. Years before he reportedly said that democracy was like a street car, you get off when you arrive at your destination. Once he secured power and neutered the military, he turned authoritarian. That in part reflected his fear of rising evidence of corruption: once on the outs, AKP activists now had an opportunity to reward themselves for their hard work and good fortune. Tax authorities were turned against opposition businessmen. Critical media were targeted and seized. Perceived opponents, especially followers of the Islamic cleric Fethullah Gulen, were identified and purged from government posts. Some critics were swallowed by vast conspiracy prosecutions directed at those supposedly plotting to overthrow Erdogan.

As time progressed the modern sultan’s ruthlessness, paranoia, and grandiosity grew. The failed 2016 coup acted like the Reichstag fire for Adolf Hitler, providing an excuse and opportunity to crush his opponents. Tens of thousands have been arrested, imprisoned, fired, and/or persecuted. The press has mostly been stolen, cowed, coopted, or bought. Earlier this year, for the first time, Erdogan refused to accept a valid election result, the AKP loss of the mayoralty in Istanbul, Turkey’s largest city. He forced a rerun, which was lost by a huge margin. However, while thought to be on the electoral ropes, his recent invasion of Syria gained plaudits from across the political spectrum.

If only Turks were suffering under Erdogan’s misrule, then Washington might look the other way. However, Ankara’s fantastic dragnet caught Americans, too. For instance, Serkan Golge, a Turkish-American and NASA scientist, was arrested and sentenced to 7.5 years in jail for possessing a $1 bill, supposedly the sign used by Gulen’s followers. Thankfully, he was unexpectedly released after three years imprisonment in May. Others still languish in custody.

At least one other American, evangelical minister Andrew Brunson, was detained as a hostage. Erdogan was shockingly blunt, saying: “They say, ‘give us the pastor.’ You have another pastor in your hands. Give us that pastor and we will do what we can in the judiciary to give you this one.” Last year, Ankara released him after two years in prison under strong U.S. pressure.

Still, U.S. officials never let the brutality of the House of Saud or numerous other strongmen get in the way of a practical if not beautiful friendship. Saudi Arabia and Egypt both have arrested numerous dual citizens, which has left the overall relationship largely unimpaired. However, Ankara’s orientation has changed dramatically. Erdogan has done more than removed state debilities on religious practice. He has begun to press more fundamentalist Islamic values on those with a more liberal disposition. That does not make Turkey the same as Iran, but Erdogan’s conduct has created fears that Turkey could become Iran-lite.

Worse, at least from a geopolitical perspective, Turkey has arrayed itself against several important American objectives. For instance, at the early stages of the Syrian civil war Ankara allowed ISIS fighters transit across Turkish territory. Erdogan’s son appeared to traffic in Islamic State oil. Instead of combating Islamic fundamentalism, the regime dallied with the ideology for a profit. Even today, the regime is more determined to crush Syrian Kurdish forces than Islamic State fighters.

Turkey twice invaded northern Syria, conquering land occupied by Kurdish forces allied with Washington. The result has been to seriously disrupt U.S. plans which already were disastrously unrealistic. Turkey and its Syrian insurgent allies engaged in ethnic cleansing. Washington removed its forces under pressure. Kurds reengaged with the Syrian government. Moscow negotiated with Ankara. The Turkish assault caused the president to threaten to wreck Turkey’s economy; members of Congress are demanding sanctions against Ankara. There is little reason to expect Turkey to become more cooperative.

Moreover, Turkey moved sharply toward Russia after courting war by shooting down a Russian warplane. Ankara cooperated with Moscow in Syria and purchased Russian S-400 missiles despite sharp opposition from Washington. Here, too, Congress pressed a reluctant administration to impose economic sanctions, as required by statute, on Turkey, a NATO ally. Although the administration refused, the bilateral relationship is in tatters. Other than President Trump, a passel of Turkish lobbyists, and Turkish-Americans loyal to a distinguished heritage, Ankara is left with few friends in America.

The problem is not just with America. Although Syria and Russia still disagree over important issues, no European NATO member can feel certain that Ankara would be on its side in the event of conflict—the most important contingency for which the alliance was formed. Yet the Europeans must tread carefully, given Turkey’s control over potential mass migration into the continent.

The deterioration in the relationship was captured by Erdogan’s egregious visit in 2017, when his security detail physically attacked peaceful protestors. On U.S. soil, Erdogan treats Americans with the same contempt and brutality that he treats Turkish citizens in his homeland.

Trump should not have invited Erdogan to America. More substantively, Washington should respond in kind to Turkish hostility. If Ankara activates the S-400 missiles purchased from Russia, then the United States should embargo the F-35s originally slated for Ankara. Imposing sanctions seems overkill; refusing to trust the Turkish military is the right remedy.

Washington also should remove its estimated fifty nuclear weapons from Incirlik Air Base. Although they are theoretically secure, Erdogan could take nuclear hostages to coerce the United States. Indeed, given his express desire to make Turkey into a nuclear power, he might decide that grabbing America’s tactical nukes would offer a short-cut. If the U.S. cannot trust Turkey with F-35s, Washington cannot trust Ankara with possession of nuclear weapons, however restricted.

Certainly, the United States should drop Turkey from any military planning for the Middle East or elsewhere. Washington still should attempt to cooperate with Ankara when possible. However, Erdogan cannot be relied upon irrespective of the particular issue. The right objective is damage limitation.

More controversially, the United States and other NATO members should create procedures allowing for the suspension and ouster of errant members—and apply the measures to Turkey. Given its proximity to the Europeans, they are more likely to be cautious in supporting expulsion. However, suspension, at least, seems in order, to limit Ankara’s access to sensitive intelligence and limit its ability to do organizational mischief. Doing so also would allow for the eventual creation of a new government with a different perspective.

Trump should give his Turkish counterpart a call. There’s no need for Erdogan to come to America. And certainly not to bring along his brutish bodyguards. Whatever needs to be communicated could be done by phone. The president and Erdogan might be friends, but Washington and Ankara are not.