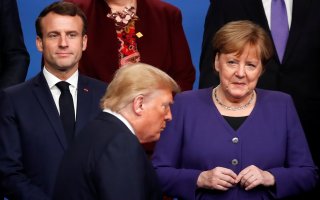 Given his comments on a variety of international issues during the 2016 presidential campaign, some advocates of a new foreign policy based on realism and restraint had cautious hopes that Donald Trump would implement some badly needed changes once he became president. Most of those expectations soon proved to be unfounded. To this day, U.S. troops remain mired in Afghanistan and Syria, despite Trump’s rhetorical commitment to end those quixotic ventures. There were no serious steps to re‐​evaluate NATO and other U.S. alliances that candidate Trump had termed “obsolete,” although U.S. pressure on the allies to accept greater financial burden sharing did intensify. And contrary to the prevailing political mythology, there has been no attempt to dial‐​back Washington’s dangerously confrontational policy toward Russia.

One recent action that initially appeared to be a refreshing exception to that dismal record was the announcement in June that Washington would withdraw 9,500 of the 34,500 U.S. troops stationed in Germany. Even before the formal announcement, rigid defenders of the NATO status quo responded with a hysterical overreaction to news reports about the decision. Predictable allegations that the modest withdrawal would play into the hands of Vladimir Putin and fatally undermine the defense of democratic Europe became the norm. Defenders of the move were few and far between.

Even that rare Trump administration gesture toward foreign policy realism and restraint now seems overblown. Although the actual size of the withdrawal will be larger than the total in the original reports (11,900 versus 9,400), only 6,400 will return to the United States. The remainder will be deployed to other NATO countries in Europe. Analyst Binoy Campmark put the matter well when he described the move as merely “adjusting the military furniture.”

Worse, the decision apparently includes deploying 1,000 U.S. troops to Poland—a step that Moscow will view as even more antagonistic to its security interests than if they were left in Germany. Poland’s defense minister boasted that “we will have an American command in Poland. This command will manage the troops deployed along NATO’s eastern flank.” Permanently stationing U.S. forces there also violates promises given to Moscow when the Kremlin agreed to Germany’s reunification and the continued membership of a united Germany within NATO.

The redeployment and partial withdrawal of U.S. forces does little to reduce Europe’s unhealthy security over‐​dependence on the United States. It does even less to mitigate an increasingly dangerous confrontational U.S. policy toward Russia; indeed, it will have the opposite effect. On balance, it appears to be a decision motivated primarily by President Trump’s annoyance with the German government’s continued underinvestment in its own defense and resistance to Washington’s pressure for greater NATO burden‐​sharing. Poland has conducted a better public relations campaign on both fronts, and the Trump administration has responded to that courtship by rewarding Warsaw with a deployment of U.S. forces to act as a tripwire to deter Russia.

Once again, Donald Trump proves that with respect to foreign policy realism and restraint, he may talk the talk, but he doesn’t walk the walk. Most realists abandoned any hope for meaningful, productive changes in Washington’s approach to world affairs under President Trump a long time ago. This latest episode should convince the handful of remaining holdouts that such hopes are totally misplaced.

This article by Ted Galen Carpenter was first published by the Cato Institute here.