Ukraine and the Bomb: Myths and Misconceptions 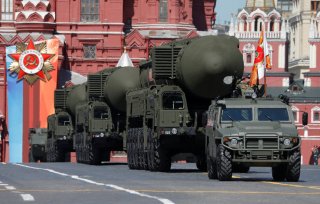 After Russia invaded Ukraine in 2014, arguments circulated that Ukraine would have been safer from Russian aggression if it had nuclear weapons. Today, this debate is back in the news. On a recent episode of Ploughshares Fund’s Press the Button podcast, Dr. Maria Rost Rublee joined Ploughshares Fund President Dr. Emma Belcher to discuss the assumptions underlying this argument and explain why it is a fantasy.

Rublee, an Associate Professor of Politics and International Relations at Monash University in Australia, first investigated this issue back in 2015. In her conversation with Belcher, Rublee breaks down the technical, political, and strategic reasons why nuclear weapons would not have kept Ukraine safe from a Russian invasion then or now.

At the end of the Cold War, Ukraine inherited the world’s third-largest nuclear arsenal. However, the weapons left on Ukrainian territory were Soviet-era weapons, and Moscow had control of them. As Rublee explains, “all the maintenance on them had to be carried out by Soviet scientists, so essentially, [Ukraine] hosted these weapons, but they had almost no capability of maintaining them or moderniz[ing] them, let alone having the codes to actually use them.” Therefore, those insisting that keeping these weapons would have made Ukraine safer are ignoring the reality that Ukraine did not have the technical capabilities to keep or use these weapons in the first place.

This leads Rublee to emphasize that not only is it incorrect to believe nuclear weapons would have prevented Russia from invading Ukraine, but it is also the wrong question to be asking. Rublee argues that “instead of saying, ‘if Ukraine had kept [its] nuclear capability would Russia have invaded?’ The question is, what would have happened to Ukraine if it insisted on keeping Soviet nuclear weapons?”

This is where the political and strategic barriers to keeping nuclear weapons come in. Rublee highlights that Russia was actively trying to prevent Ukraine from keeping the weapons, partially because of Russia’s obligations under the Treaty on the Non-Proliferation of Nuclear Weapons (NPT), but more so due to Russia’s connection to Crimea. Rublee says the possibility that Crimea, “this holy city of Russian Christianity, could have nuclear weapons [that could] potentially be used against Russia, it was just unbelievable.”

It was also not in the United States’ interest to have Ukraine become a nuclear weapons state. At the end of the Cold War, the United States was looking to advance arms control agreements like START I with Russia. Rublee notes that “one of the Russian criteria for entering into this new arms control agreement was that Ukraine would give up the Soviet weapons.” In fact, as part of the agreement under START I, Ukraine also signed the NPT to confirm its non-nuclear status.

Under these circumstances, Ukraine was also able to benefit from European and US investment. But, Rublee notes, “if Ukraine had stood up against the United States and Europe,” it wouldn’t have received over $30 billion in foreign aid over several years. This money was desperately needed to address domestic needs such as healthcare, education, and poverty.

Rublee highlights that the cost of attempting to develop its own nuclear weapons program instead of transferring the weapons to Russia would have been crippling. An estimated $60 billion over ten years would have been required “for all the facilities … all the training that [Ukraine] would need to be able to maintain and modernize both the nuclear weapons and the delivery vehicles.”

Rublee asks us to imagine a Ukraine with no foreign support, isolated from the West, and facing threats from Russia to give up its nuclear weapons. “How would this have worked? It wouldn't have.”

Rublee concludes that this response from Russia “tells us that nuclear use is much more likely than any of us care to think about.”

You can find the full interview with Dr. Maria Rost Rublee at Press the Button. Her article on this topic is available here.

Ploughshares Fund · Ukraine and the Bomb