Is a U.S.-China Clash Over Taiwan Inevitable? 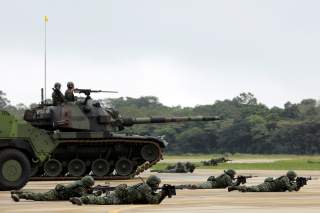 At a time when the trade war between Washington and Beijing shows no signs of abating and China’s policy in the South China Sea remains a major irritant in the bilateral relationship, events like the U.S.-China Diplomatic and Security Dialogue become that much more important. Defense Secretary Jim Mattis and Secretary of State Mike Pompeo struck some of the right notes during the latest dialogue conference recently, calling the discussions “incredibly productive” and reaffirming that “[t]he United States is not pursuing a cold war or a containment policy with China.”

Reassuring words for the camera aside, the U.S.-China relationship is not in a good place. At best, it’s semi-functional, with the possibility of an inadvertent military clash between two great powers becoming too close for comfort. Territorial disputes over the South China Sea, of course, have been lurking in the background for years as Beijing continues to transform islets in the area into strategic military outposts. But outside the tit-for-tat import tariffs, it’s the divergence over Taiwan that remains perhaps the most combustible issue driving Washington and Beijing into disparate corners.

Differences of opinion on the status of Taiwan are nothing new. Even before the establishment of diplomatic relations between the United States and China, the Taiwan issue has been the heavy albatross weighing down one of the world’s most critical state-to-state relationships. The possibility of Beijing changing its decades-long policy of incorporating Taiwan into the mainland is nil; the chance of Washington throwing away the Taiwan Relations Act or downgrading the U.S.-Taiwanese defense relationship is equally unlikely. To decades, U.S. and Chinese officials have managed to work around the Taiwan issue, adopting a “we agree to disagree” approach. The 1982 U.S.-China Communique in Arms Sales to Taiwan is very much still the law of the land for both powers, an imperfect but good-enough quid pro quo—Washington recognizes Beijing’s territorial claims over the island, and the Chinese acknowledge the U.S. policy on sales of defense equipment to Taipei.

The Trump administration, however, has taken what could be described as one of the most hawkish positions on Taiwan in the post–Cold War era. Even before Donald Trump formally took the oath of office, he participated in the first phone call with a Taiwanese head-of-state in four decades—a conversation that rankled the Chinese government and suggested the new White House would tinker with the One China Policy that has guided U.S.-China relations since 1979. Over the first two years of the administration, Washington has agreed to sell Taiwan $1.75 billion of military equipment, from torpedos and early warning systems to spare parts for the island’s U.S.-manufactured combat aircraft. The U.S. Congress has been more than happy to oblige; the 2017 Taiwan Travel Act and the 2018 National Defense Authorization Act, which reaffirmed U.S. defense ties with Taipei and encouraged port calls between the U.S. and Taiwanese navies, only fed into Beijing’s paranoia.

The Taiwan Strait dividing the island and the Chinese mainland has seen action as well. In April, the People’s Liberation Army carried out live-fire drills in the strait—not an uncommon occurrence but one that came a month after Chinese president Xi Jinping told the National People’s Congress that China will remain steadfast against attempts to challenge its sovereignty. “Not one inch of the territory of the great motherland can be carved off from China,” Jinping told the legislature this March.

While nobody is anticipating a clash between the U.S. or Chinese navies in the waters of the Taiwan Strait, the strategic competition now dominating the relationship across multiple domains—from trade, intellectual property, and cybersecurity to military modernization and the South China Sea—is not exactly an encouraging prospect for stability. Washington is showing no signs of backing down, convinced that the United States is on the morally correct side of history; last month, the USS Antietam and USS Curtis Wilbur sailed through the Taiwan Strait in the kinds of freedom of navigation exercises that have become increasingly common in the Pacific during the Trump administration. U.S. defense officials wouldn’t be doing their jobs if they didn’t plan for a confrontation with the Chinese navy in the strait, just as Washington is doing in the South China Sea. As Jie Dalei, a professor at Peking University wrote last month, “it is certainly not inconceivable that another crisis across the strait could transpire.”

A deliberate military provocation by either side or a miscommunication leading to an mid-sea or mid-air incident could easily spiral into an international crisis between the world’s two largest economies and defense spenders. Neither the United States or China has an interest in engaging in acts of brinkmanship, any of which could destroy whatever prospect there were for a detente in the relationship.

Yet with Beijing long viewing Taiwan as a red-line and Washington continuing to consider the defense of Taiwan as a core component of its Asia policy, the room for error is getting dangerously slim.