U.S. Foreign Policy Should Not Be a Religious Crusade 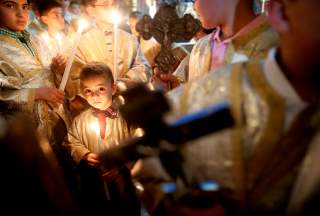 Christians and other religious minorities continue to be at risk in the Middle East, now, it is said, because the Trump administration intends to withdraw from Syria. Their fate long has been of concern in Washington. During his ill-fated presidential campaign, Sen. Marco Rubio complained that “due to the scourge of radical Islam, some churches that have existed since the Book of Acts are on the brink of ruin.”

However, it was promiscuous military intervention backed by Rubio and many Christian leaders that loosed this scourge upon Middle Eastern Christians. Indeed, absent the Iraq invasion, there would be no Islamic State. In practice, Mideast Christians may have no more dangerous enemy than Uncle Sam. U.S. policy, often backed by influential (if misguided) American evangelical leaders, has consistently painted a target on their coreligionists in the birthplace of Christianity.

Now, to redress the ill consequences of their earlier policy prescriptions, some evangelicals want to conscript their fellow countrymen to intervene militarily on behalf of the Christians behalf in the same region. Washington should continue, presumably forever, to illegally occupy Syria’s north, and confront Turks, Iranians, Russians, Syrians, and ISIS fighters in a region of no serious security interest to America.

Assuaging one’s guilt for past mistakes is not a valid reason to go to war, however.

Washington has attacked Mideast Christians for years and on multiple fronts. The most enduring problem has been the uncritical embrace by many evangelicals of Israel, to the exclusion of Palestinian Christians. In 2016 Republican presidential candidates were particularly shameless in competing to give the most absolute and fulsome endorsement of Benjamin Netanyahu’s radical government and occupation policies.

Yet Christians living in the West Bank suffer under military rule and de facto colonization by sometimes violent settlers, who often make “price tag” attacks on local Christians. In contrast, noted the State Department, “Relations between Palestinian Christians and Muslims were generally good, with both groups focusing more on ethnic and political similarities than religious differences.” On one trip to Israel I had dinner with several Arab Christians in Bethlehem, in the occupied West Bank, and they talked of inconvenience, hardship, harassment, fear, and discrimination.

Even in Israel proper, vandalism and harassment of Christian property and clergy, respectively, by ultra-Orthodox activists is common. The extremist group Lehava explicitly targets Christians; its head, Benzion Goptstein, called them “vampires and blood suckers” who should be expelled. Official Israeli policy is overtly hostile to Christians who visit to promote their faith. But evangelical leaders usually say nothing. I met Melkite Catholic Archbishop Abuna Elias Chacour a few years ago, who asked why “does friendship with Jews mean enmity with Palestinians” for U.S. Christians?

As a result of Washington’s stance, Christians elsewhere in the Middle East and Muslim nations beyond often are blamed for backing Israel and its mistreatment of Palestinians, even when these Christians stand for Palestinians. Indeed, with Christianity considered to be the official religion of the United States, many Muslims see indigenous Christians as Washington’s puppets. Alas, the charge matches the mood in conspiracy-minded Muslim communities.

But no single policy has been as injurious to Middle Eastern Christians as Washington’s simultaneously promiscuous and disastrous military interventions, most notably the invasion of Iraq. First to suffer were Iraqi Christians. They lived under the same political repression as Muslims, but were free to worship, work, and live, unlike in countries such as totalitarian Saudi Arabia. Indeed, the ruling Baath Party originally was formed by a Christian; a (presumably nominal) Christian, Tariq Aziz, later served both as foreign minister and vice president under Hussein.

The U.S. invasion, which overthrew Hussein, immediately empowered Iran, Iraq’s ruthless majority-Shia neighbor and religious persecutor. Worse was the ensuing sectarian war. Although mostly between newly empowered Shiites and freshly ousted Sunnis, Christians and other religious minorities were caught in the crossfire. Targeted with kidnapping and extortion by common criminals and shootings and bombings by Islamist radicals, Christians fled by the hundreds of thousands to Kurdistan, Jordan, Syria—another secular dictatorship which did not persecute—and beyond. The Bush administration refused to do anything to assist Christians harmed by its policies lest it be accused of favoring America’s coreligionists.

But the killing did not stop with Al Qaeda in Iraq, which arose only because of George W. Bush’s disastrously counterproductive invasion. That group morphed into the Islamic State, which erupted with extraordinary ferocity in 2014 in Iraq and Syria. It slaughtered anyone who did not hold to its radical Sunni faith: liberal Sunnis, Shiites, Yazidis, Christians, and other religious minorities. Although the Obama administration targeted ISIS, it simultaneously sought to overthrow the Assad government in Syria, which posed the most important barrier to that nation becoming part of the Islamic State’s planned caliphate.

Bashar al-Assad was no political liberal, but Christians and members of other minority faiths, such as Alawites (a Shia offshoot of which Assad is a member), could live their faith unmolested. When I visited Syria last August an Alawite businessman told me that whatever the criticisms of Assad, there was only one choice when the civil war started. Another Alawite said that the alternative to Assad was “chaos and the jungle.” The slogan shouted by supposed “moderates” demonstrating against the regime, before the outbreak of hostilities, was “Christians to Beirut, Alawites to the grave.”

Once war engulfed the country, religious minorities were among the chief victims. Admitted the State Department at the time: “Extremists groups targeted Shia, Alawites, and religious minorities with killings, kidnappings, torture, and arrests in the areas of the country under their control.” More specifically, the Islamic State “required Christians to convert, flee, pay a special tax, or face execution in territory it controls, and systematically destroyed churches, Shia shrines, and other religious sites.” Yet Washington sought to remove the Syrian government, effectively backing the expansion of the radicals.

U.S. policy was viewed with horror by many Middle Eastern Christians, especially those close to the conflict. On a trip to Jordan and Lebanon with a U.S.-based humanitarian group I met several Christian aid workers active in Syria. No one had anything good to say about Washington’s determination to overthrow Assad. One told me: “You Americans don’t know what you are doing” by targeting the Syrian leader. They already saw the Islamists’ movie in Iraq and didn’t like the ending. They certainly didn’t want a repeat experience: if radicals took over Syria, then where could Christians and other minorities flee?

The debacle in Libya added fuel to the fire. Of course, responsibility for U.S. involvement falls largely on President Barack Obama and Secretary of State Hillary Clinton (who later giggled uproariously when asked about Muammar el-Qaddafi’s death). But most of the usual GOP suspects also backed the Obama administration’s decision to intervene in the Libyan civil war. Sen. John McCain and Sen. Lindsey Graham, the unofficial leaders of Washington’s bipartisan War Party, did the full Maori Haka in an attempt to involve the United States. It was another grand victory, which, alas, resulted in multiple competing governments, empowered numerous armed militias, spread weapons throughout the region, and left a vacuum partly filled by the Islamic State, which ostentatiously murdered Egyptian Copts laboring in Libya.

Frankly, it is a wonder that Mideast Christians do not run in horror whenever they see an American coming their way.

However, U.S. Christians apparently learned nothing. They want U.S. troops to stay in Syria—illegally and without congressional authorization—apparently on the theory a couple thousand Americans, otherwise engaged in solving a multitude of regional ills, also can safeguard religious minorities. It is a fool’s errand.

The good news is that most Christians live in areas retaken by the Assad government, even though Washington and its allies aided Islamist radicals, including, bizarrely, the local Al Qaeda affiliate. Whether Assad’s resurgence is seen as positive or negative from the perspective of U.S. policy, it clearly is good for Christians and other religious minorities. That leaves those living in northern Kurdish areas. For instance, Nina Shea of the Hudson Institute argued that “we do have interests in the region that need to be considered, including the protection of Christians, and the Kurds.”

Far more apocalyptic, even hysterical, was retired Lt. Gen. Jerry Boykin of the Family Research Council, who appeared to be channeling the Apostle John on the coming end times. “If the U.S. withdraws from this part of Syria, then Turkey—whose recent claim to religious freedom fame is its unjust detention of Pastor Andrew Brunson—is ready to step in,” Boykin said. “Our withdrawal would also allow Iran to expand its influence in the region and menace its neighbors, including Israel. Violent jihadists everywhere will see it as a signal to slaughter Christians, Yazidis, and others.”

There are interests, as Shea argues, but they are modest. In contrast, Boykin is wrong in almost every instance. Iran already is involved in Syria, at the invitation of Damascus’, to suppress the U.S.-supported insurgency. Tehran’s involvement has had no impact on Syrian Christians (and a couple thousand Americans in the north will not prevent further Syrian-Iranian cooperation). In case Boykin didn’t notice, violent jihadists began slaughtering Christians and others after Washington helpfully removed Saddam Hussein. Such killings have nothing to do with the U.S. forces in Syria. And the Islamic State has been defeated as a caliphate, losing more than 99 percent of its onetime territory. Syria, Russia, Turkey, Iran, Jordan, Iraq, and the Gulf States collectively can clear out the final one percent.