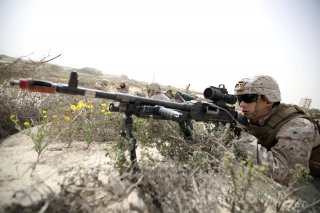 The U.S.-led counterterrorism coalition denied that its decision to withdraw from an Iraqi base was “related to recent attacks against Iraqi bases hosting Coalition troops, or the ongoing COVID-19 situation in Iraq” in a Monday statement.

Operation Inherent Resolve has handed over three of its bases to the Iraqi government over the past two weeks. The task force’s withdrawal comes as Iraq faces a novel coronavirus disease (COVID-19) outbreak, and tensions between U.S. forces and Iranian-backed local militias continue to rise. But the U.S.-led coalition says that the moves are part of an unrelated transfer of responsibility to Iraqi authorities.

“As a result of the success of [Iraqi Security Forces] in their fight against ISIS, the Coalition is repositioning troops from a few smaller bases,” a spokesperson for Operation Inherent Resolve stated on March 20. “These bases remain under Iraqi control and we will continue our advising partnership for the permanent defeat of [ISIS] from other Iraqi military bases, providing much-needed specialist support.”

The task force began handing over K1 Airbase outside of Kirkuk to Iraqi forces on Sunday. Operation Inherent Resolve had similarly evacuated Qayyarah Airfield West near Mosul last Thursday, and Al Qaim Base along the Iraqi-Syrian border earlier in the month.

K1 Airbase had also been the scene of a bloody attack that killed an American translator in December, provoking a spiral of escalation that had ended in a near-war between the United States and Iran.

Iranian-backed militias killed two more Americans at Camp Taji earlier this month. U.S. forces responded with a series of airstrikes, but the situation has not yet escalated further.

Secretary of State Mike Pompeo reportedly advocated for harsher retaliation in White House deliberations, hoping that the coronavirus crisis would leave Iran in a weakened position. But the military pushed back against plans to destroy the Iranian-backed militia network in Iraq by force, warning of the dangerous consequences of an all-out war with Iran on Iraqi soil.

Kata’ib Hezbollah, an Iranian-backed militia, accused U.S. forces of carrying out “suspicious movements…in an attempt to achieve suspicious goals” and promised to “make the positions that they are planning to target into their cemetary” in a March 25 statement in Arabic.

The militia group said that the United States was taking advantage of the “difficult conditions” created by the novel coronavirus, and embraced an unsubstantiated conspiracy theory that President Donald Trump had intentionally spread the virus.

Iraq has seen forty COVID-19 deaths so far, and the pandemic threatens to overwhelm the Iraqi healthcare system as the country faces an unrelated economic meltdown.

The coalition is suspending its training missions alongside Iraqi forces to avoid the spread of the novel coronavirus, but this is only a “short term” move, according to coalitions’ the March 20 statement.

Operation Inherent Resolve explicitly insisted that its withdrawal from K1 was unrelated to either the coronavirus outbreak or Kata’ib Hezbollah’s threats.

“The Coalition troops will depart K1 after the completion of equipment transfers to Iraqi Security Forces, in the coming days,” a spokesperson stated on Sunday. “These military movements are long-planned in coordination with the Government of Iraq.”

Brig. Gen. Vincent Barker added that the withdrawal from K1 was “another proud day for our Iraqi Security Force partners and the anti-ISIS international military Coalition.”