War Weary: Why Washington Needs to Bring Its Troops Home 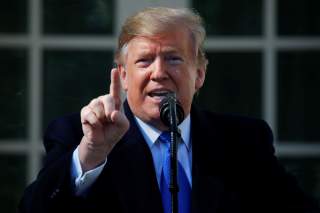 “Great countries do not fight endless wars,” intoned President Donald Trump in his State of the Union address, and he is right. Certainly, nations that do fight them don’t stay great, which should serve as a powerful warning for American policymakers.

Alas, the Washington blob, the bipartisan foreign-policy elite that has kept the United States at war for years, appears to have learned nothing. Indeed, members of Congress didn’t greet the president’s pronouncement with much enthusiasm. Legislators had voted against his plan to withdraw U.S. forces from Syria and Afghanistan. Members also had opposed his stated interest in doing the same from South Korea. These are the same congressmen who can’t be bothered to fulfill their constitutional responsibility to approve America’s wars, yet they fear the president might end one.

Indeed, some Washington policymakers reject any accountability. Five years ago Samantha Power, one of the high tribunes of humanitarian military intervention, reflected on what most Americans recognize to be years of disastrous war-making: “I think there is too much of, ‘Oh, look, this is what intervention has wrought’ . . . one has to be careful about overdrawing lessons.”

But they must be drawn. And the lessons from America’s recent decades of intervention and war have not been pretty. For instance, Ronald Reagan took the United States into Lebanon’s bitter civil war, backing the “national” government, which controlled little more than the capital of Beirut. Americans became combatants and died for nothing.

Bin Laden and Al Qaeda had no interest in America’s domestic institutions. They launched their terrorist operations in response to U.S. intervention and war-making in the Middle East. Bush administration Deputy Defense Secretary Paul Wolfowitz argued that one benefit of the Iraq war was the removal of U.S. “occupation” forces from Saudi Arabia, one of bin Laden’s grievances.

American troops have been fighting in Afghanistan for more than seventeen years, making it the longest war in U.S. history. Washington almost immediately achieved its objectives of striking Al Qaeda and ousting the Taliban; since then the war’s apparent goal has been to impose a centralized liberal democracy in Kabul, an effort neither worth war nor achievable at reasonable cost. Today Americans are dying to kick the final withdrawal to the next president.

Tepid involvement in Syria discouraged negotiation, extended the civil war, thereby increasing civilian casualties and hardship. In Yemen Washington continues to underwrite the mass killing of civilians who have done nothing against America, while empowering an Al Qaeda affiliate which targeted the United States.

Really, what would it mean to “overdraw” lessons from this succession of not-so-grand adventures?

The Watson Institute at Brown University helps us keep a proper perspective by offering an updated estimate of the costs of “the post–9/11 wars.” One can quibble about some of the numbers—even author Neta Crawford acknowledged using the most conservative figure for the number of dead Iraqi civilians, which “is surely an underestimate.” Moreover, explained Crawford: “tens of thousands of civilians may have died in retaking Mosul and other cities from ISIS but their bodies have likely not been recovered.” Moreover, her “tally does not include ‘indirect deaths,’” which occur “when wars’ destruction leads to long term, ‘indirect,’ consequences for people’s health in war zones, for example because of loss of access to food, water, health facilities, electricity or other infrastructure.”

But even her limited totals require that serious lessons be learned.

There are other costs. Some 6.29 million refugees and 6.15 million internally displaced people. But, added Crawford, her “update just scratches the surface of the human consequences of seventeen years of war. Too often, legislators, NGOs, and the news media that try to track the consequences of the wars are inhibited by governments determined to paint a rosy picture of perfect execution and progress.”

In contrast, officials could help if so inclined. Explained Crawford: “The U.S. has made some effort to increase transparency, but there are a number of areas—the number of civilians killed and injured, and the number of U.S. military and veteran suicides, for instance—where greater transparency would lead to greater accountability and could lead to better policy.” However, as Power made clear, officials—Democrats and Republicans, liberals and conservatives—do not want to be held accountable. They don’t appear to want to improve policy either.

Of course, Washington policymakers don’t intend the destruction, death, and chaos that they routinely cause. But they are responsible when they blow up a country and trigger sectarian conflict. And then intervene again in an attempt to clean up their mistake. Thereby creating new problems. Leading to yet another round of bombings, invasions, occupations, and more.

In doing so the United States has killed a lot of bad guys such as Saddam Hussein, Osama bin Laden, Al Qaeda, the Taliban, Muammar el-Qaddafi, the Islamic State, and more. There’s no need to shed tears over their fate. But too often they have been replaced by more bad guys—and even worse problems. And intervening has gotten a lot of fine, patriotic American service personnel and civilians killed. As well as killed many decent folks in other nations, trying to defend their homes and live normal lives. A vast amount of wealth has been squandered. And new crises have been created.

That is, perhaps, the worst consequence that “intervention has wrought,” as Power put it. And why, contra her concern, it is difficult, no, perhaps impossible, to “overdraw” the lessons from America’s promiscuous intervention. Washington’s endless wars have been a disaster. Absent Uncle Sam’s consistent blundering and bloody foreign policy, many of the problems now confronting the United States would not exist. New insurgent and terrorist groups. Additional attacks on U.S. targets, civilian and military. Mass murder, enslavement, and ethnic cleansing in foreign nations. Regional instability, repression, and conflict. Adversaries on the march. Perhaps worst of all, more terrorists appear to be targeting America and Americans today than on 9/11. Victory, whatever that means, actually is getting further away.

Every time officials launch a new assault they promise the result will be different. But it isn’t. More Americans die. More innocent foreigners are killed. More money is squandered. And more enemies are created. The process repeats itself again and again.

Give President Trump his due. He is unorthodox, unpredictable, and ill-informed. And many of his policies are inconsistent, even grotesquely misguided, such as underwriting Saudi Arabia’s campaign against Yemen. Nevertheless, the president possesses a common sense lacked by the blob. As he put it, “great nations do not fight endless wars.” Yet the United States has been fighting unnecessary and foolish wars for years. Donald Trump has the opportunity to leave a very different legacy. He could be the president who finally says “no more.”

Doug Bandow is a senior fellow at the Cato Institute. A former Special Assistant to President Ronald Reagan, he is author of Foreign Follies: America’s New Global Empire.