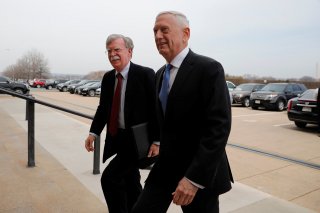 Mattis was nicknamed “Mad Dog” and “Chaos,” but Bolton portrays the retired four-star Marine general as a voice of moderation in President Donald Trump’s early cabinet—especially as Bolton pushed for a self-described policy of “regime change” towards Iran.

“[T]he ghost of Mattis’s protestations about taking Iran seriously would dog us right until the end of 2018, when he departed, and beyond,” Bolton wrote.

Mattis, through a spokesperson, declined to comment on the book.

The conflict between Bolton and Mattis over Iran began on April 7, 2018, when Bashar al-Assad was accused of launching a deadly chemical weapons attack on civilians in the rebel-held city of Douma.

Trump had earlier bombed Syrian military bases in response to a similar incident in 2017. Bolton wanted to make Assad, whose government was defended by Iranian troops, “pay dearly” for using chemical weapons again.

But, he claims, Mattis “pushed relentlessly” for an “innocuous” response. Mattis was, in Bolton’s eyes, “focused on ISIS rather than Iran” in Syria.

France, Britain and the United States bombed a group of Syrian chemical research facilities on April 14. Six soldiers and three civilians were injured, according to the Syrian government.

“The Pentagon's proposed response to Syria's chemical weapons attack was far weaker than it should have been, largely because Mattis had stacked the options presented to Trump in ways that left little real choice,” Bolton wrote.

Mattis butted heads with Bolton again later that month, when Trump was considering nixing a 2015 deal aimed at regulating the Iranian nuclear program. Bolton instead wanted to pursue a pressure campaign either “to bring Iran to its knees, or to overthrow the regime.”

Mattis sent Bolton a “classified document” weighing in against the decision, although he also said that he could “live with it,” according to Bolton.

Trump eventually pulled out of the deal.

At a July 26 meeting to discuss the progress of the campaign against Iran, Mattis tried “to downplay the overall importance of Iran in the international threat matrix,” according to Bolton.

Tensions over Iran flared up for the last time in September, when attackers fired on the U.S. Consulate in Basra, Iraq.

“‏Coming days before the anniversary of 9/11, and with the 2012 assault on our Benghazi diplomatic compound on our minds, we needed to think strategically about our response,” Bolton wrote. “Dead Americans in Iraq, tragic in themselves, might accelerate withdrawal, to our long-term detriment, and that of Israel and our Arab allies.”

Bolton thought that the attackers were “undoubtedly supplied by Iran,” but says that Mattis argued that “we weren’t abolustely sure the Shia [Muslim] militia groups were tied to Iran, which defied credulity.”

After two more attacks, “even Mattis could not deny the Iran connection.” The State Department evacuated the consulate in Basra and issued a statement blaming Iran.

Mattis and Bolton found themselves on the same side at the end of the year, both fighting to keep Trump from withdrawing U.S. forces from Syria. But Bolton could not help but insult Mattis’s views on Iran.

“I also wanted to minimize any potential gains for Iran, something Mattis never seemed to prioritize,” he wrote, claiming that Joint Chiefs of Staff chairman Gen. Joseph Dunford “understood better” the Iranian threat.

“He may have established a reputation as a warrior-scholar for carrying with him on the battlefield a copy of Marcus Aurelius’s Meditations,” Bolton wrote, “but he was no debater.”

Less than a year later, Bolton was also out of the White House—fired by a tweet.