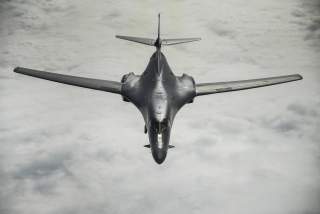 Presidential election season is upon us, which can mean only one thing: candidates will be scouring one another’s records for defects and controversial remarks.

As the undisputed frontrunner in Democratic primary polls and a four-decade record of public service, former Vice President Joe Biden will be the most vulnerable target.  And sure enough, like clockwork, the fuselage of opposition research has already begun.

Last week, progressive activists unearthed a 36-second clip of then-Senator Biden from the year 2000 giving his assessment about U.S. policy on North Korea.  The senator from Delaware, eyes wide, made a comment that may very well come back to bite him if foreign policy ever becomes an issue in the presidential campaign slugfest.

“[I]f we [the United States] have evidence that they [North Korea] are building a missile system, an offensive system, with a nuclear capacity and they won’t negotiate with us, I would support a unilateral strike to take them out,” Biden told the crowd.  "That to me is a hell of a lot less risky way to deal with my grandchildren’s future than to engage in an overall arms race…”

Why, 18 years later, is this an important statement to highlight?  It’s simple, really: the former veep, at least as it pertains to his past, was more than willing to endorse the sort of hawkish policy prescriptions that would make National Security Adviser John Bolton blush.

Short clips can easily be taken out of context.  Admittedly, we don’t know what Biden said leading up to this quote or whether he was talking more specifically about the possibility of preventing an imminent North Korean attack on the United States or its allies in East Asia.

It’s also unclear whether the vice president was recommending a unilateral strike on a specific target, a more broad-based military campaign to degrade Pyongyang’s overall military capacity, or a militarily-imposed regime change operation to oust the Kim dynasty.

The North Koreans at that time were far less nuclear-capable than they are today; in 2000, Pyongyang was still abiding by the Agreed Framework accord negotiated six years prior by the Clinton administration.  Given the fact that North Korea was not yet nuclear-capable, a hypothetical U.S. military strike in 2000 and the inevitable North Korean retaliation would theoretically be less damaging than if a similar scenario were to unfold today.

But all of this may not matter. Short of evidence that North Korea is preparing to launch a highly catastrophic, direct attack against the American people or Washington’s allies, the military option would still be a bone-headed and downright crazy idea.  It may sound tough for a politician to peddle such an option in a Washington, D.C. conference room, but its real-world effects would be the closest thing the world has come to a man-made apocalypse since World War II.

Even a casual observer of the Korean Peninsula could tell you that a single, deadly incident or miscalculation between the U.S. and North Korea or between the two Koreas themselves—let alone a deliberate, premeditated military attack on North Korean soil—would open the floodgates to a violent conflict none of us have experienced since Adolf Hitler and Josef Stalin’s armies were slugging it out in Stalingrad.

It’s difficult to put into words just how horrendous war on the Korean Peninsula would be. Millions of civilians, including tens of thousands of Americans who live and work in Seoul, would perish in a game of tit-for-tat artillery and missile strikes.  Pyongyang doesn’t need nuclear weapons to unleash significant damage on South Korea; all it would require to turn Seoul into a living hell are the short-range ballistic missiles and extensive artillery system the Kim regime has already embedded along the DMZ.

Experts have estimated that North Korea possesses 13,600 guns and multiple rocket launchers near the border, an incredibly large arsenal of firepower bearing down on the South Korean capital.  U.S. Army Gen. Vincent Brooks, the former commander of U.S. Forces-Korea, testified to the Senate last year that an artillery barrage targeting civilians in Seoul "would yield several thousand casualties with the potential to affect millions of South Korean citizens."  Pyongyang would be wiped off the map, becoming the modern-day version of Dresden circa 1945.

The refugee situation would be astronomical, with millions of North Koreans streaming to the Chinese border for safety and Beijing likely doing everything it could to prevent its northeastern provinces from being overrun by desperate families seeking an escape from the madness.

There is a reason why such a calamity hasn’t happened.  All sides, including the North Koreans, understand what would happen in the event of a military conflict. Nobody would win such a contest, certainly not at an acceptable price.

On the North Korea issue, Biden is an establishmentarian.  Like many politicians and foreign policy practitioners on both sides of the political aisle, he appears to believe that denuclearization should be the first order of business for the United States—regardless of how unrealistic Pyongyang’s immediate, unconditional, verified nuclear disarmament truly is. On a trip to Seoul in December 2013, Biden delivered a speech that was part hardline, part status quo.  "The United States and the world have to make it absolutely clear to Kim Jong Un that the international community will not accept or tolerate nuclear arms in North Korea,” Biden told the audience.  "The simple fact is this - North Korea can never achieve security and prosperity so long as it pursues nuclear weapons, period.”  The language was nearly identical to what Secretary of State Mike Pompeo, National Security Adviser Bolton, and the rest of the Washington foreign policy community have been saying ad-naseum for the past three decades.

But as Washington should know by now, just saying the same thing over and over again doesn’t make it true.  When Joe Biden is on the debate stage this summer with the rest of the packed Democratic field, he will have to explain why he thought striking North Korea 18 years ago was a good idea.  And more importantly, he will have to put forth a case to the American people about how he intends to address the North Korea problem.