When Will Trump Bring Home U.S. Forces from Syria? 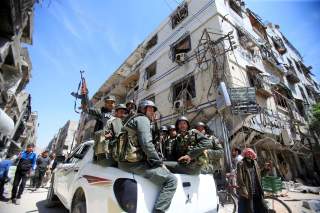 “I think we are very close to finishing the physical destruction of the caliphate,” said Lt. Gen. Frank McKenzie, nominated to head U.S. Central Command. Some two thousand ISIS fighters are limited to about one percent of the territory once held by the Islamic State. It is time to bring home U.S. forces and allow Syria and its neighbors to finish the job.

Presidents George W. Bush and Barack Obama put the United States on the road to permanent war in the Middle East. Washington has battled in Iraq, Libya, Syria, and Yemen. The results ranged from disappointing to disastrous.

Candidate Donald Trump said he wanted no more such conflicts. Back in April President Trump reiterated that sentiment, saying he wanted “to get out.” Yet the fighting continues. It is time for him to take charge of U.S. policy and end America’s needless wars. Syria would be a good place to start.

Multisided civil wars rarely end well—especially one where most of the combatants deserve to lose. The last such conflict was Lebanon, which began in 1975 and finally ended in 1990. President Ronald Reagan intervened on behalf of the nominal national government, which actually ruled little more than Beirut; America’s embassy and Marine Corps barracks were destroyed in retaliation, the price of Washington becoming an active combatant.

President Reagan took the only sensible course: exit the imbroglio. He didn’t worry which domestic faction was up or down and which outsider was exercising how much influence in Beirut. He recognized that the United States had nothing at stake in the tragic conflict which warranted involvement.

It is time for President Trump to do the same in Syria.

The Obama administration originally anointed President Bashar al-Assad as a “reformer,” then declared that he had to go—discouraging both sides from negotiation and compromise. Washington’s attempt to simultaneously oust Assad, defeat ISIS, help “moderate” and some Islamist insurgents, cooperate with the Kurds, win assistance from the Turks, satisfy Israel, and confront Iran never had much chance of success. Few U.S. policymakers had the understanding and competence necessary to achieve even a couple of those objectives, let alone all of them.

Over the years Assad gradually triumphed over his enemies. The price for his ravaged land has been high: hundreds of thousands killed, mass destruction, dependence on Russia, Iran, and Hezbollah. However, Assad is essentially the last man standing. Notions that after surviving seven years of war he now will voluntarily yield are a fantasy. Nor does he have any reason to dismiss his benefactors. On the cusp of victory, their support no longer is as critical, but Syria remains a target of Washington and is in desperate need of assistance of all kinds.

For the United States Syria is a human tragedy, not a security threat. The Syrian Arab Republic was allied with the Soviet Union during the Cold War without dramatic effect. Today Russia is merely attempting to preserve a shadow of its previous position.

Damascus came out badly whenever it challenged Israel and in recent years it accepted a cold peace, occasionally broken by Israeli military strikes, including against a nuclear reactor. Despite Washington’s political designation of Syria as a state sponsor of terrorism, it has never posed a terrorist threat to America, unlike nominal U.S. ally Saudi Arabia. There is no cause for Washington to worry about Assad’s future.

The only vaguely justifiable argument for American involvement was the rise of the Islamic State, which threatened Middle Eastern states rather than America. They were capable of defeating ISIS, but several chose to pursue other priorities once America showed interest. Turkey long facilitated, and even profited from, the radical group’s operations while seeking Assad’s defeat; Saudi Arabia and the United Arab Emirates shifted to their war against Yemen; Israel mostly targeted Syria’s allies, Iran and Hezbollah. Moreover, Washington complained about the role of Iran and Hezbollah even though they fought against the Islamic State.

President Trump originally suggested that the United States would only stay until the group was defeated. In September Secretary of Defense Jim Mattis emphasized: “Right now our troops inside Syria are there for one purpose, and that’s under the UN authorization about defeating ISIS,” he explained. That suggests U.S. troops should be ready to leave. Explained McKenzie in congressional testimony last week: “the military component” in Syria is “very near to an end.” With ISIS’s demise imminent, other nations should be left to eradicate a movement which threatened them all.

However, Pentagon officials privately talked about “secondary benefits” of the U.S. presence in Syria, including countering Iran. Other decisionmakers in the administration, including National Security Adviser John Bolton and Secretary of State Mike Pompeo, have been more public. In September Bolton announced: “We’re not going to leave as long as Iranian troops are outside Iranian borders and that includes Iranian proxies and militias.”

Pompeo demanded Iran’s departure from Syria—essentially the complete surrender of an independent foreign policy—as a price for negotiation with Washington. He also rejected offering any reconstruction aid money for areas controlled by Syria’s government: “The onus for expelling Iran from the country falls on the Syria government,” he said. “If Syria does not ensure the total withdrawal of Iranian troops it will not receive one single dollar for reconstruction.”

James Jeffrey, Pompeo’s U.S. Special Representative for Syria Engagement, or more accurately, Advocate for Aggressive Military Intervention in Syria (AAMIS), emphasized military action. Last week he observed: “When we say we’re going to be present, not forever, in Syria, but present until our conditions—enduring defeat of ISIS . . . the withdrawal of Iranian—commanded forces from the entirety of Syria and an irreversible political process—we’re saying the United States as a whole.” The president, added Jeffrey, “has various options that involve the military, that involve our forces, remember we were present not in northern Iraq, but over northern Iraq in Operation Northern Watch for thirteen years.”

Similarly, in September the AAMIS said that U.S. forces would remain to force an Iranian departure. Since Tehran’s forces are unlikely to leave any time soon, that essentially means a permanent deployment. Of course, Jeffrey was publicly circumspect on timing: “That means we are not in a hurry.” Although the AAMIS claimed that the United States was not targeting Assad, officials said they expected America’s continued occupation of the north, which includes substantial oil resources, and territory bordering Iraq would weaken the Damascus government. This is seen as another “secondary benefit” of Washington’s intervention.

Unfortunately, this assignment is illegal. Jeffrey argued that intervention against ISIS “flows from congressional authorization in 2001 against terror post–9/11,” but Congress only authorized action against those involved in 9/11, who “planned, authorized, committed or aided” the attacks. The Islamic State came into existence only years later and differed from Al Qaeda, choosing essentially conventional warfare, not terrorism, to create a quasi-nation state. There isn’t even the smallest legal fig leaf to cover military action intended to dismember Syria, oust that nation’s government, and confront foreign forces invited in by Damascus. If the administration believes these objectives warrant war, it should request congressional authority to act.

Moreover, U.S. policy is unrealistic. Washington is on the wrong side of international law. America might not like the Iranian presence, which Jeffrey calls “part of the problem not part of the solution,” but Tehran has been invited in by the legitimate Syrian government. So has Moscow. Moreover, neither are likely to surrender to Washington’s demand for complete hegemony in the Middle East. Both are geographically closer to Syria than America, forged lengthy ties with Damascus, and have substantial reasons, unlike Washington, to view Assad’s fate as an important foreign-policy interest. They will not allow the United States to dictate.

Worse is the risk of an expanded war for no good purpose. Last week, despite Washington’s denials, the United States apparently launched drone strikes on Syrian government positions. The expectation that American forces backing Kurdish militias will block transit by Iranian forces risks confrontation should the latter—with the permission of the Syrian government, whose territory Washington is occupying—exercise their rights under international law.

U.S. support for Kurdish forces, viewed as terrorists by Ankara, has created potential conflict with NATO ally Turkey, which earlier this year invaded Kurdish territory and installed Arab proxies to rule. President Recep Tayyip Erdogan explicitly threatened military action against U.S. personnel cooperating with Kurdish militias in Syria’s north. Far worse is the possibility of a clash with Russia. Last month the AAMIS said there had been about a dozen incidents, some with an exchange of fire. “U.S. forces are legitimately in Syria,” Jeffrey claimed incorrectly, and “exercise the right of self-defense when they feel threatened.” If restraint by local actors fails, then far worse is possible.

America so far has spent $5.9 trillion on its Mideast and South Asian wars. Roughly fifteen thousand Americans, both military personnel and contractors, along with another 1,500 allied personnel, have been killed. Tens of thousands of Americans have been injured, many grievously. The result has not been victory, but more terrorism, less stability, ravaged societies, wrecked governments, and mass deaths. Hundreds of thousands of civilians have died as a result of U.S. military action. All Washington has received in return is the prospect of endless war.