Why America Should Say No to an Arab NATO 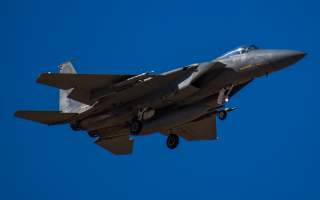 Perhaps Jamal Khashoggi did not die in vain. The state-sponsored murder by the Kingdom of Saudi Arabia revealed the cruelty of those who rule what President Donald Trump bizarrely called a “truly spectacular ally.” Crown Prince Mohammed bin Salman’s (MbS) reckless brutality should end any further discussion of the United States creating an “Arab NATO,” modeled after the U.S.-European North Atlantic Treaty Organization (NATO) alliance.

Establishing yet another alliance dependent on America would seem a curious step by a president who has criticized virtually every U.S. ally for leeching off the Pentagon. Yet administration officials talked of creating the Middle East Strategic Alliance (MESA). This alliance, explained a National Security Council spokesman, “will serve as a bulwark against Iranian aggression, terrorism, extremism, and will bring stability to the Middle East.”

The idea was tried before and failed miserably. In 1955 Washington promoted the Middle East Treaty Organization, or Baghdad Pact, which was relabeled the Central Treaty Organization after Iraq’s pro-Western monarchy was overthrown. The 1979 Iranian revolution finally put the alliance, if it deserved to be called that, out of its misery.

The proposal to unite Egypt, Jordan, and the six Gulf states—all majority Sunni lands—against majority Shia Iran through MESA is another disaster waiting to happen. It seeks to solve a nonexistent problem.

Iran poses no threat to America, even though President Trump sometimes sounds like he believes the former to be the superpower and the latter to be the weak, vulnerable, and isolated victim. Moreover, the Persian Gulf is relatively unimportant today. The region’s oil stranglehold has been broken by America’s emergence as a huge energy producer and the development of alternative supplies elsewhere. Nor does any hegemonic enemy—like the Soviet Union of old—threaten to control the Middle East and its resources. Furthermore, the president’s other concern, Israel, is a nuclear-armed regional superpower which doesn’t need Washington’s military support.

Indeed, the region has shown surprising resiliency without a greater U.S. presence. Libya and Yemen are engulfed in war, Syria is emerging from seven years of brutal conflict, Islamist radicals wrecked Iraq, Lebanon is fractious politically and weak externally, Jordan seems ever fragile, and Bahrain and Egypt brutally crushed internal democracy movements. Yet business continues largely as usual throughout the region. Americans barely noticed the constant crisis, except when their government foolishly thrust them into other people’s controversies and conflicts.

Moreover, against the U.S. administration’s claims, Tehran doesn’t even seriously threaten its neighbors. Only in the nightmares of administration hawks and their friends in Riyadh is Iran on the march. The latter’s economy is a wreck, ruling regime is unstable, its military is weak, its allies are pitiful, and international friends are sparse. Talk of some sort of empire including unstable Iraq, divided Lebanon, ravaged Syria, and the nightmare of Yemen is a parody of serious analysis. Forgetting his talking points during an interview, even MbS dismissed Tehran’s potential: “Iran is not a rival to Saudi Arabia. Its army is not among the top five armies in the Muslim world. The Saudi economy is larger than the Iranian economy. Iran is far from being equal to Saudi Arabia.”

As for extremism and terrorism, the latter is almost entirely a Sunni phenomenon and has been underwritten by all the Gulf states in varying degrees. They also have backed radical groups in Libya and Syria and unleashed al-Qaeda and other Islamist forces in Yemen. Additionally, the extraordinarily brutal minority Sunni court in Bahrain and military dictator in Egypt are encouraging extremist retaliation in those nations.

Moreover, an explicitly Sunni MESA would further polarize the region along religious lines, pushing countries with passable relations with Tehran to act like its enemies while shoving Iraq toward its larger majority Shia neighbor. Egypt and Jordan also would be dragged into the confrontation, expected to take on an aggressive anti-Iran agenda mostly promoted by Bahrain, Saudi Arabia, and the United Arab Emirates. The United States would become similarly entangled. A conflict would become more likely, with Washington acting as an agent of the dominant Sunni states.

Furthermore, the eight presumed alliance members have little in common. Bahrain, Saudi Arabia, and the UAE are extravagantly hostile to Iran and unremittingly repressive at home. However, Kuwait, Oman, and Qatar are more neutral in their foreign orientations and less brutal in their domestic rule. Jordan’s balancing act is largely independent of Tehran. Egypt has little interest in Iran, other than doing whatever is necessary to collect large subsidies from Riyadh and Abu Dhabi. In other words, genuine unity across a potential MESA is a fantasy.

In fact, such an alliance appeals to Saudi Arabia and the Emirates precisely because it would become a mechanism for them to enlist Washington to force their agenda on their neighbors. Of the states suggested for MESA membership, they possess the largest economies, most active militaries, and closest relationships with Washington. They already have Bahrain and Egypt on their payrolls. Riyadh and Abu Dhabi also have led an unsuccessful effort to isolate Qatar to end its independent foreign policy. An “Arab NATO” could formalize their objectives. Finally, Turkey, currently vying with Saudi Arabia for regional leadership, might lean toward Iran in an attempt to promote more balance.

Indeed, putting American power behind such an organization would promote Saudi and Emirati hegemony. Although the two kingdoms run by two young crown princes do not always agree—for instance, their objectives in Yemen have diverged—overall their goals appear to remarkably similar, and notably malign. This would not be good under normal circumstances, but by now it should be evident to all that the Saudi crown prince is particularly reckless, repressive, and willing to use force. No one should want him and his policies dominating the region.

For the leading Gulf members, MESA’s major purpose would be political, not military. After all, the members’ fighting capabilities are dismal. Last year the Saudis spent some $77 billion on their military but were incapable of doing little more than slaughtering civilians in Yemen. With $25 billion in outlays, the UAE seems more capable but has limited reach. Egypt’s armed forces have plenty of men and materiel but haven’t fought in forty-five years. Its main role is to oppress the civilian population, maintaining its privileged economic and political position. The other presumed MESA members possess even less impressive militaries. As a result, a Middle East alliance would be more dependent on America than the original NATO.

By bringing America into direct confrontation with Iran, and enhancing Riyadh’s influence on American policy, MESA would encourage Tehran to augment its missile capabilities and reconsider its nuclear program. The Islamic Republic has good reason to fear the United States, which staged a coup against Iran’s elected government in 1953, and backed Saddam Hussein’s Iraq when it waged a war of aggression on Iran. That war was highlighted by the use of chemical weapons and remains a major source of anger. More recently, America imposed harsh economic sanctions on Iran and directly challenged Tehran’s obvious security interests in neighboring states, such as Syria. On top of this, Washington has heavily armed Iran’s principal antagonist, Saudi Arabia, and routinely threatened war. MESA would bring U.S. forces even closer to Iran and reinforce Riyadh’s dangerous influence over U.S. Middle East policy. As a result, Tehran would have little choice but to look for ways to improve its deterrence against attack—including getting nuclear weapons.

Perhaps worst of all, a MESA-like organization would enable Saudi Arabia, in particular, to entangle America in the latest crackpot scheme advanced by MbS. Indeed, by tightening political and militaries ties, such an alliance would risk dragging Washington into any number of confrontations and conflicts initiated by the Kingdom. Consider: MbS invaded Yemen, backed radical insurgents in Syria, kidnapped the Lebanese prime minister, used money and troops to maintain harsh dictatorships in Bahrain and Egypt, and launched a political war against Qatar. He has dramatically increased repression at home, turning a collegial monarchy into a personal dictatorship, and kidnapped and murdered critics abroad, most recently American resident and journalist Jamal Khashoggi. Under the crown prince, Saudi Arabia governance has gone from cautious and consensus-driven to extreme and one-sided. He is destabilizing the region, to America’s detriment.

Additionally, an organization like MESA would be particularly dangerous with Donald Trump as president. After offering cogent criticisms of the Kingdom as a candidate, he almost immediately fell in the thrall of the crown prince, convincing himself that America cannot operate in the Middle East without adopting MbS’ priorities. An Arab NATO would encourage the Saudis to act even more like European members of the original NATO—attempting to direct U.S. policy while minimizing their contribution to the collective effort.

U.S. policy in the Middle East and North Africa already is bad enough. Overall, it has been a bust, or more accurately, a debacle. Washington has intervened in three civil wars (Lebanon, Libya, Yemen) and imposed regime change regime via coup (Iran) and war (Iraq, Libya). America backed brutal dictatorships (Bahrain, Egypt, Saudi Arabia) and supported authoritarians of lesser degree (Gulf states, Jordan, Turkey). The United States has also backed blatant aggression (Iraq vs. Iran, Saudi Arabia and the UAE vs. Yemen) and imposed sanctions (on Iran, Libya, Sudan, Syria). Finally, Washington has offered an essentially blank check (to Israel in its occupation over millions of Palestinians). Few of these policies have turned out well. All too often, the United States created a mess which it used to justify intervening again and again. Formally tying its security to the actions of the region’s most aggressive and least liberal states would be a prescription for further disaster.