Why Christians Should Embrace Refugees and Not Politicians 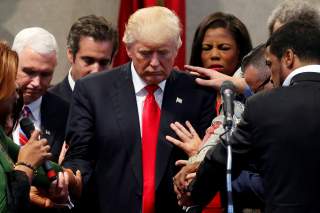 It took President Donald Trump nearly two years to order American troops in Syria home. Or just to move them out of harm’s way, if not yet home. He was right to take that very limited step, despite the hostile tsunami against his decision.

The angry fulminations that characterized his critics—in the main their responses have been more emotional eruptions than considered arguments—well illustrate the need for an American exit from Syria, and elsewhere in the Middle East. Many policymakers appear to believe that America’s purpose is to settle that tragic nation’s brutal, bitter civil war: depose President Bashar al-Assad, promote moderate Islamists, oust Assad’s Iranian allies, constrain Russian influence, deter Turkish involvement, protect Syrian Kurdish forces, and more. Such an effort is not just bizarre hubris but overweening arrogance and sheer delusion, as evidenced by the succession of Middle Eastern geopolitical disasters orchestrated by Washington in recent years.

As if the foregoing list was not long enough, the president’s evangelical backers have added another duty: protect Christians from Turkey and other threats. It is an attractive mission. For years there had been a slow erosion of the Christian population in the faith’s birthplace. The environment is difficult, even hostile, to all religious minorities, and the West offers a hospitable home for those able to emigrate. Although most defenders of Christianity discourage such flight, lest faith disappears from its birthplace, it is impossible to criticize people for seeking a better, safer, and more satisfying life elsewhere.

However, in 2003 Western Christians proved themselves to be perhaps the greatest enemies of Middle Eastern Christianity. The Iraq invasion triggered sectarian strife, which killed hundreds of thousands of people, many of whom were Christians. More than half of the original Christian population fled, some to Kurdistan, others abroad, especially to Jordan, Lebanon, and Syria. This tragedy was reinforced by the rise of ISIS, an outgrowth of Al Qaeda in Iraq, which conquered much of the Nineveh Plains, then home to many religious minorities. No Iraq invasion, no Islamic State.

America’s misbegotten Syria policy, most notably the attempt to overthrow Assad, a secular dictator who included Christians within his ruling circle, added even more fuel to the sectarian fire. Republicans, strongly backed by evangelicals, pushed to aid insurgents ranging from faux moderates to Al Qaeda acolytes. Alas, Syrian Christians, along with other religious minorities, were targeted by Islamist radicals, with predictably horrific results. Republicans claiming to stand by the oppressed church, such as Sen. Marco Rubio (R-FL), advocated policies that did much to destroy it.

Syrian Christians resented Americans’ arrogant ignorance. In 2015, I met several Christian aid workers from Syria in Beirut for a training program. One was almost in tears when she blurted out to me, “You Americans don’t know what you are doing.” Two years later, I met an Alawite who complained that the early demonstrators acclaimed in the West as promoting democracy publicly chanted “Christians to Beirut, Alawites to the grave.” She and other religious minorities saw the movie in Iraq and didn’t like the ending—and were determined to prevent a repeat.

Few pro-war religious leaders, purported followers of the Prince of Peace who enthusiastically backed GOP war hawks dedicated to reigning death and destruction upon foreign peoples, reflected upon, let alone apologized for, their support for policies which did so much damage to their co-religionists. Christian leaders, especially evangelicals, who embraced war-happy Republican politicians, bear substantial moral responsibility for the disastrous results.

Perhaps in part to make up for their unintended encouragement of the destruction of Iraq’s and Syria’s Christians, evangelicals rushed to criticize President Trump for pulling U.S. personnel out of northern Syria. In order to protect foreign Christians, these American Christians insisted that American service members should remain, apparently forever, in the potential maelstrom involving Syrian, Turkish, Kurdish, Iranian, Islamist, and Russian forces in a country of little security importance to America.

Blogger Erick Erickson called Trump’s act as “an egregious act of betrayal.” In Defense of Christians, President Toufic Baaklini complained that if Washington does not stop Ankara, “Turkey will complete the work that ISIS tried to do, in eradicating Christians from this region.” Ashty Bahro, former director of the Evangelical Alliance of Kurdistan, worried that “the American withdrawal from the region will lead to the extinction of Christianity from the region.” Iraqi-born Hadi Pir of the group Yazda complained that leaving Syria “could enable future religious persecution.”

Beirut Pastor Charlie Costa observed that “even those who support the president were disappointed with that because the view in the Middle East is always that American protects Christians.” Tony Perkins of the Family Research Council opined that the president’s decision “did shake the evangelical community a little bit. This was uncharacteristic of this administration.” The most bizarre, over-the-top attack came from religious broadcaster Pat Robertson, who warned that Trump “is in danger of losing the mandate of heaven.” Apparently Robertson believes that he has been anointed to suspend that mandate: years ago he argued that God had struck down Israeli prime minister Ariel Sharon with a stroke for removing Israeli troops from the Gaza Strip.

So fierce was the criticism that the president felt it necessary to defend his policy at a dinner of the Values Voter Summit, filled with those who normally have been among his strongest supporters. Apparently, members of his most loyal constituency forgot that candidate Trump had run against the Mideast’s “endless wars.”

Evangelicals and other religious believers are rightly concerned about the status of their co-believers. But the U.S. government is a civil institution with secular responsibilities. Washington must balance a wide range of interests involving the American people, to whom it is responsible. That includes choosing when to risk the lives of U.S. service personnel and the safety of Americans at home by entangling the nation in foreign conflicts of little relevance to U.S. security.

Syria’s civil war is a tragedy. However, the conflict in no way threatened Americans. Assad was a typical Middle Eastern dictator, and one Washington would have felt entirely comfortable in backing had regional loyalties turned out a little differently. (Consider the Trump administration’s embrace of the odious, aggressive and repressive Saudi monarchy.) Assad neither attacked nor threatened America. In recent years, Damascus didn’t even challenge Israel, despite the latter’s airstrikes against a Syrian nuclear reactor and allied Iranian military positions. Russia’s close relationship, including its naval base, is not new; it stretches back into the Cold War.

The country’s violent disintegration was neither America’s problem nor one susceptible to America’s solution. Indeed, the Obama administration inadvertently discouraged negotiation by Assad and insurgents when insisting on his ouster. Even the rise of the Islamic State did not pose a direct threat to the United States; instead, it challenged essentially every nation and people within the Middle East. The group’s attempt to create a caliphate, or quasi-nation state, separated it from Al Qaeda, which focused on attacking the more distant enemies, including America.

Having played an important role in breaking ISIS at the height of its power, the United States can now leave responsibility for preventing the group’s future revival to Iraq, Syria, Iran, Jordan, the Gulf States, Turkey, Kurds, and Russia. No doubt they would prefer that Washington continue to helpfully suppress their common enemy. Doing so is not, however, required for U.S. security.

Although humanitarianism is a worthy end, it cannot justify military intervention without a compelling security justification. Moreover, if Uncle Sam wanted to become a humanitarian crusader, he wouldn’t start in northern Syria. The death toll in Yemen is far higher. More people are dying in Libya.

In any case, the United States should not show preference to specific religious groups. Washington would best help Middle Eastern Christians by following the Hippocratic Oath, first do no harm. Destabilizing nations, supporting theocracies, and threatening Islamist regimes all have resulted in more intense attacks on religious minorities. Rather than attempt to capture U.S. military policy for their co-religionists’ benefit, Christians should push for a more generous refugee/asylum policy to help respond to attacks on Mideast Christians.

Finally, American Christians should stop imagining that Republican politicians are truly in their corner. Costa admitted that “there is not only a sense of gratitude but also a sense of disappointment. Disappointment because we feel that American Christians are sometimes naïve. Politicians can sell them anything by supporting what they say with a verse of scripture.” How true.

Evangelical Christians backed the president in 2016. Of all people, they should be aware of his promise to get America out of unnecessary Middle Eastern wars. Finally, he is taking a very small step toward fulfilling that promise. Syria is not America’s problem. America cannot save Syria. The tragic status of the region’s Christians does not justify U.S. military deployments in the region.

Doug Bandow is a senior fellow at the Cato Institute and former special assistant to President Ronald Reagan. He is the author of Foreign Follies: America’s New Global Empire and Beyond Good Intentions: A Biblical View of Politics.