Why Joe Biden Gets it Wrong on Foreign Policy 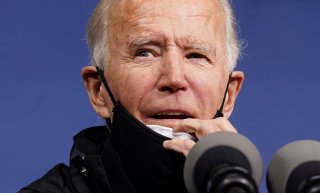 The Biden campaign has worked tirelessly over the past year to channel the image of Joe Biden as a “serious person,” particularly on foreign policy matters. Biden, according to this narrative, is an elder statesman who grasps the intricacies of international politics. Trump, by contrast, is presented as an inept bull in a china shop who only speaks the language of “fire and fury.” Only Biden, we are told, can bring back stability around the globe.

Don’t believe a word of it. This carefully curated image of Joe Biden’s strategic acumen and geopolitical foresight is at odds with the former vice president’s own stated views and policy track record. His statements about a variety of countries suggest that they are based less on a strategic view of world affairs than snap judgments.

Consider Korea. During the third presidential debate on October 22, Trump touted the benefits of having “good relations” with foreign leaders like North Korea’s Kim Jong-un. Biden responded by invoking Hitler: “We had a good relationship with Hitler before he, in fact, invaded Europe, the rest of Europe. Come on. The reason he would not meet with President Obama is because President Obama said, ‘We’re going to talk about denuclearization. We’re not going to legitimize you and we’re going to continue to push stronger and stronger sanctions on you.’ That’s why he wouldn’t meet with us.” It should go without saying that likening Kim Jong Un to Adolf Hitler is not only wildly inflammatory but also contributes nothing to our policy understanding of either figure. The second part of Biden’s statement is even more dangerous, reflecting a failed commitment to old Washington orthodoxy at a time when a growing number of North Korea experts are quite correctly warning that a blanket insistence on denuclearization as a precondition for peace talks is futile and counterproductive.

Biden extended a similarly brash stance toward America’s friends. At a recent Philadelphia town hall event, Biden—who has incessantly lectured Trump on the perils of spurning America’s longstanding allies—all but consigned two key U.S. partners into a new Axis of Evil:  “And NATO is in the risk of beginning to crack because they don't doubt—they doubt our—whether we're there. You see what's happened in everything from Belarus to Poland to Hungary, and the rise of totalitarian regimes in the world, and as well, this president embraces all the thugs in the world.” It bears repeating that Hungary and Poland—which have both had legitimate and competitive elections within the past several years—are not only members of the North Atlantic Treaty Organization but are among the two biggest military contributors to NATO’s collective security arrangement. Biden’s comments are even more tone-deaf in light of data showing that Poland and Hungary consistently rank among the most pro-American EU member states. This unprompted attack has already prompted a vigorous rebuke from the government in Budapest, needlessly harming relations between a NATO ally and prospective President-elect before they began.

Nor does Biden fare better on matters of grand strategy. At a political event in Iowa City, the former vice president dismissed the bipartisan consensus that Beijing poses potential economic and security threats to the United States. “China is going to eat our lunch? Come on, man… I mean, you know, they’re not bad folks, folks. But guess what? They’re not competition for us,” he said. Biden’s reasoning? Chinese society is too divided, and the Chinese Communist Party (CCP) too corrupt, to mount a credible challenge to the United States: “They can’t even figure out how to deal with the fact that they have this great division between the China Sea and the mountains in the east, I mean the west.. they can’t figure out how they’re going to deal with the corruption that exists within the system."

In point of fact, serious ethnic cleavages and rampant corruption have not prevented China from aggressively expanding its geo-economic influence across every continent. From shoring up Venezuela’s embattled Nicolás Maduro with mercenaries and billions of dollars to systematically undercutting Washington’s economic and political reach in Africa, the CCP is actively challenging US interests across the world. This isn’t to say that those challenges are unmanageable with fresh and forward-looking strategies, but to deny their existence only serves to compound their growing threat.

Biden’s comments unsurprisingly drew the ire of politicians from as diverse a cast as Mitt Romney and Bernie Sanders. With the 2020 presidential election looming large on the horizon, Biden jettisoned his position for an entirely new set of talking points. By the summer of 2019, Biden was arguing that Trump is the one who is blind to the Chinese threat: “While Trump is attacking our friends, China is pressing its advantage all over the world . . . you bet I’m worried about China—if we keep following Trump’s path.” He labeled China as a “competitor” during a CNN town hall meeting on Sept. 18, 2020, and again during a 60 Minutes interview last week.

It is unclear what prompted Biden’s change of heart, other than perhaps the electoral optics of being seen as soft on China at a time when millions of Chinese Uighur Muslims are being ethnically cleansed in hundreds of internment camps strewn across China’s northwest. Biden’s abrupt, pre-election transformation into a China hawk has hardly been accompanied by concrete solutions for managing Sino-American competition. Instead, he continues to tout the old chestnuts of Washington’s inept bipartisan China policies: targeted sanctions for human rights abuses, multilateral action to stem China’s “illegal and unfair trade practices,” and more robust enforcement of intellectual property laws. These generic prescriptions are premised on the decades-old neoliberal article of faith that closer engagement with international institutions will inevitably bring China into the fold of liberal-democratic nations.

But a rising China remains a secondary concern for the Democratic candidate, whose go-to campaign trail foreign policy topic remains the Russia menace. Beginning with the Obama administration’s support for regime change in Ukraine during the 2014 Maidan revolution, Biden has distinguished himself as one of the foremost advocates for a bellicose approach toward Russia. Biden’s conceit stems from a peculiar, but unfortunately popular, understanding of Russian president Vladimir Putin’s true motives: “The Cold War was based on a conflict of two profoundly different ideological notions of how the world should function. This is just basically about a kleptocracy protecting itself . . . I think there’s a basic decision that they cannot compete against a unified West. I think that is Putin’s judgment. And so everything he can do to dismantle the post-World War II liberal world order, including NATO and the EU, I think, is viewed as in their immediate self-interest,” said Biden during a 2018 Council on Foreign Relations appearance.

In Biden’s view, Putin, an authoritarian kleptocrat fearful of losing his iron grip over Russia, is on a mission to divide and destroy NATO and the EU because he knows he can’t compete against a united west. Thus, concludes Biden, the thrust of Washington’s Russia policy should be to “impose meaningful costs” on Moscow for its vast and ever-growing list of transgressions against the free world. Predictably, these “meaningful costs” amount to more of the same: targeted sanctions, stationing NATO troops ever closer to Russia’s borders, corralling NATO into a united front against Russia’s global assault on democracy, and lobbying for the NATO accession of post-Soviet states like Georgia and Ukraine.

Though certainly punitive in their effect, it is unclear what concrete strategic goals these policies are meant to accomplish. After six years of crescendoing sanctions and international measures aimed at isolating Moscow geopolitically, Russia is no closer to pro-western regime change; if anything, the economic pain from sanctions has only stoked anti-western sentiment and further consolidated the Russian masses behind Putin’s government. Nor did the Obama-Biden administration’s punitive measures induce any significant changes in the Kremlin’s behavior, partly because the sanctions arrayed against Russia are so rigid and exhaustive that the Kremlin has long since abandoned any hope they will ever be lifted.

If nothing else, Biden’s recent foreign policy statements are par for the course of his four-decade-long political career—one that has long been characterized by intermittent attempts to seize short-term political advantages by rewriting his own policy history. Since the beginning of the 2020 election, for example, Biden has consistently portrayed himself as an avowed opponent of the Iraq War. “From the moment Shock and Awe started,” said Biden at a Democratic Presidential Debate in 2019, “from that moment, I was opposed to the effort.” But, as numerous fact-checkers have noted, Biden was not at all opposed to “the effort.” In fact, he repeatedly endorsed the invasion of Iraq from 2003 through 2004, even chiding some skeptical Democrats for not being sufficiently supportive of the war effort. Biden’s volte-face only came in 2005, coinciding with his newly revealed intention to explore a presidential run. By then, opposition to the Iraq war was no longer a particularly novel political opinion to hold.