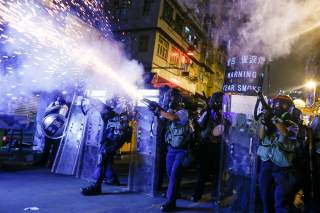 Perhaps the greatest threat to liberty is disorder. Not because chaos necessarily begets violence. But because the fear of lawlessness often encourages repression.

The Chinese government poses the greatest threat to Hong Kong’s liberties. However, activists are increasing chances of a crackdown by making the territory impossible to govern. Beijing will choose violence over mayhem.

Hong Kong long led a privileged existence. More than a century ago Great Britain misused its power to force the cession and lease of lands which made up the colony of Hong Kong. However, that protected residents from the debilitating weaknesses of Imperial China, violent chaos of battling warlords, and revolutionary madness of the Red Emperor, Mao Zedong.

Of course, Hong Kongers lived under benevolent tyranny rather than parliamentary democracy. But they enjoyed British civil liberties and prospered in the freest economy on earth. The exigencies of history sheltered them from the impoverishment of China’s Great Leap Forward and insanity of the Cultural Revolution.

Alas, it seems that all good things must come to an end. Hong Kong’s ninety-nine-year lease expired in 1997. London could have attempted to muddle along with Hong Kong Island, Stonecutters Island, and Kowloon Peninsula, which had been ceded, not leased. However, they accounted for barely 14 percent of the colony’s territory and Beijing would not likely have continued to acquiesce to unfair treaties based on antiquated imperialism. Britain also could have played geopolitical chicken, calling a referendum on the territory’s future. That would have set up a confrontation when the People’s Republic of China finally felt able to fully assert its geopolitical interests.

Instead, the British negotiated Hong Kong’s transfer back to the PRC. Beijing promised to maintain the unique status of what became a Special Administrative Area. As such, Hong Kong served as the test case for China’s supposed model of one nation, two systems. The SAR would retain its unique protections for a half century, until 2047.

For more than a decade the PRC kept its promise. A journalist friend told me that Beijing had interfered less in his business than London did. However, Beijing’s political reticence eventually faded. In 2014 the SAR’s chief executive began a process of electoral reform, which fell short of genuine universal suffrage as promised by the Basic Law, essentially the territory’s constitution. The proposal would have maintained Beijing’s control over the nomination process.

That approach violated the spirit if not the letter of the Basic Law. The so-called Umbrella Revolution, a youth-led effort, erupted and paralyzed several areas for seventy-seven days. Drawing up to one hundred thousand protestors, the campaign confounded the government by demanding the impossible: real democracy, which Beijing would never grant. However, without unified leadership the demonstrators were unable to force concessions. Eventually the protests withered and activists were evicted. The PRC avoided any direct involvement in the controversy.

However, the Chinese authorities acted covertly, kidnapping publishers of books critical of the PRC. (Beijing claimed the men returned to China voluntarily.) In 2016 activists elected to the Legislative Council used their oaths to disrespect the PRC, an action which, perhaps more than anything else, awakened the not so cuddly Great Panda. At that point Beijing directly intervened, ordering the exclusion of election winners and disqualification of candidates. Last year the SAR government began prosecuting Umbrella Movement leaders.

In February the SAR’s chief executive Carrie Lam proposed extradition legislation which could have been manipulated by the PRC to legally kidnap critics. That sparked demonstrations which peaked at two million people. Again, the protests were decentralized and the demands unrealistic. Lam suspended the legislation, which could have ended the controversy.

However, demonstrators demanded that the bill be formally withdrawn, then that Lam resign, then that protestors detained be released, and finally that full democracy be granted. Also, over the objection of older democracy activists protestors turned to violence, trashing the legislative chamber, clashing with police, occupying the airport, and roughing up suspected infiltrators—who turned out to be Chinese citizens.

Police escalated their use of force, the PRC used local thugs provided by the criminal triads to beat up protestors, and Beijing ratcheted up its rhetoric, calling the protestors “terrorists,” blaming their actions on “hostile foreign forces,” and threatening to intervene if order was not restored. China also played the nationalism card for its domestic audience in its coverage of the controversy. The PRC rejected Lam’s offer to resign. Unconfirmed reports indicated that Chinese troops were moving to the territory’s border or paramilitary (People’s Armed Police) forces were being assembled for use in Hong Kong.

Protestors use desperation as justification for their actions. One demonstrator’s sign declared: “We’re fighting for survival.” No doubt, but the tactics adopted make survival far less likely. Hong Kong seems to risk descending into chaos with street battles, roaming protests, and cancelled flights. Although the vast majority of Hong Kongers backed the initial campaign against the extradition bill, support for the apparently aimless protests has begun to ebb.

Some protestors and their allies argue that the PRC cannot afford a Tiananmen Square-style showdown. Analysts contend that the reputational damage to Beijing from doing so would be too great. However, China—or at least the Chinese Communist Party—also is fighting for survival. It cannot show weakness in the face of popular protests or grant democratic freedoms to but one small part of the nation. Nor can the PRC accept chaos in one of its premier cities, which has long been the major entry point for Western commerce.

Making the situation even less tenable is the imagined role of the United States. Anyone familiar with democratic polities understands that the protests are homegrown, but some demonstrators have waved the American flag. Moreover, American politicians have loudly backed the protests. House minority leader Kevin McCarthy opined: “We see you waving the American flag, and we hear you singing our national anthem.” That cannot help but inflame the Xi regime’s suspicions, especially given Beijing’s ongoing propaganda offensive. The CCP cannot concede to demands advanced in league with America.

If chaos continues, then the only realistic alternative for the PRC, whatever the cost, is to restore order. With the June 1989 crackdown in Tiananmen Square as the model, such an effort could result in significant bloodshed.

Such a crackdown would have horrid consequences for all concerned. The SAR would lose its relative autonomy, almost certainly ending up under direct Chinese rule, and, likely temporarily under military control. Business and investment would flood outward, not likely to return for years, if ever. Wealthy individuals would look to transfer their wealth overseas while seeking any possible foreign refuge.

The commercial impact elsewhere on China would be modest, but some foreign firms likely would prepare for Western economic and political retaliation. With foreign relations almost certain to collapse, businesses that remain in the PRC could become collateral damage.

The United States would revoke Hong Kong’s special trade status. Economic sanctions of some sort would be equally inevitable. A trade embargo would remain unlikely, but in contrast to 1989 the debate over American policy would occur during the nadir of post-Mao Sino-U.S. relations. The economic relationship already is under siege; human-rights concerns are on the rise; the Pentagon is emphasizing security issues in the Indo-Pacific region. A bloody crackdown would shatter what remains of bilateral ties and strengthen arguments of hawks who believe that a new Cold War is imminent, if it has not already arrived.

Europe also would face significant pressure to act. Despite their desire for expanded economic ties, European governments have become more concerned about recent Chinese behavior. When NATO members met in April the PRC topped the agenda. “China is set to become the subject of the twenty-first century on both sides of the Atlantic,” opined German Foreign Minister Heiko Maas. Earlier this month Secretary General Jens Stoltenberg urged greater attention to Beijing: “This is not about moving NATO into the Pacific, but this is about responding to the fact that China is coming closer to us.” Europe could ill afford not to impose at least some economic penalties on the PRC.

Asian countries would be more reluctant to act. However, those reliant on America for their defense could ill afford to continue business as usual with China. Even in its own region Beijing would find its neighbors more wary and hostile, and readier to strengthen their own militaries. Whatever additional stability the CCP might believe it gained by cracking down would be dearly bought.

Beijing should recognize the very high price it would pay for any military response in Hong Kong and step back while it can. Hong Kongers should make that decision easier for China. Demonstrators need to act with intention rather than in anger. Every step should be directed at increasing the survival chances of Hong Kong’s liberties. With the Xi regime predisposed toward repression, territorial activists should not give Beijing any excuses.

Hong Kong is poised on the precipice. A Chinese crackdown would be a disaster. Beijing needs to act with forbearance. So do Hong Kong democracy activists. Otherwise disorder is likely to yield repression.