Will This New York Progressive Be the AOC of Foreign Policy? 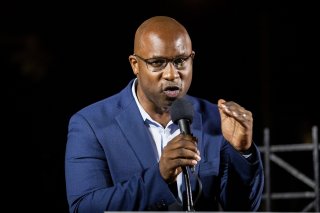 Progressives focused on foreign policy issues are feeling vindicated after Democratic voters in New York unseated a 16-term congressman who had supported the Iraq War.

Rep. Eliot Engel (D–N.Y.) has been the highest-ranking Democrat on the House Foreign Affairs Committee since 2013. But he will no longer be on the ticket in November, as New York City middle school principal Jamaal Bowman unseated Engel in Tuesday’s primary election.

“We don't just celebrate me as an individual,” Bowman said in a Tuesday night speech. “We celebrate this movement, a movement designed to push back against a system that's literally killing us.”

Bowman is part of a wave of progressive challengers backed by Justice Democrats, a Democratic group that had previously helped Rep. Alexandria Ocasio-Cortez (D–N.Y.) unseat her predecessor. But his campaign sent a specific message about foreign affairs as well.

“[F]oreign policy wasn't an afterthought in this race,” said David Segal, executive director at Demand Progress. “Bowman spoke about it quite a bit and Engel's allies, connected to…right-wing foreign policy concerns tried to swoop in and save him.”

Engel himself later disavowed the ads.

Segal and Fein both cited Engel’s support for the Iraq War in 2003 as a reason for his defeat. Another key vote may have also seriously undermined the longtime lawmaker.

Engel was one of several Democrats who opposed the 2015 nuclear deal with Iran, which President Donald Trump has since tried to revoke. Engel has also joined with Republicans in opposing economic relief to Iran amidst the coronavirus pandemic.

Tommy Vietor and Ben Rhodes, who both served as senior Obama administration officials, endorsed Bowman in a June 10 episode of Pod Save the World. Rhodes specifically cited Engel’s opposition to the Iran deal.

“Their support for Bowman means that a new era in Democratic foreign policy has arrived,” he added. “Within the party, Rhodes and his allies are the new moderates, Susan Rice is on the right fringe, and the progressive space is more energized than ever.”