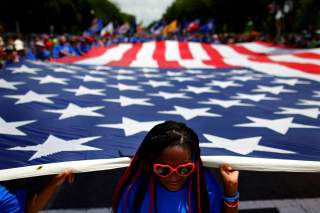 Eighty Septembers ago the world plunged into the abyss of World War II. The worst conflict in human history began with Nazi Germany’s invasion of Poland on September 1, 1939. It was a horrid, murderous conflict which started at terrible and only got worse.

Adolf Hitler’s attack on Poland, a state resurrected by the Versailles Treaty two decades before, was but the first act. Having signed a nonaggression pact with the Soviet Union, the Nazi dictator next turned his attention to France, Great Britain, and assorted countries nearby and in between. Achieving less battlefield success, Italy plunged the Balkans into war. In June 1941 Germany invaded the USSR, triggering the largest and most brutal combat of modern history. In December 1941 Japan, deeply engaged in China for a decade, expanded the battle to the United States and much of East Asia. Then the world truly was at war.

The consequences of the global conflagration were profound. Thirty countries were involved and as many as eighty-five million people died. Germany, Russia, and Japan suffered especially heavy destruction. The conflict was horrid all around, especially between Germans and Soviets and between Japanese and both Chinese and Americans. Anti-Semitism turned genocidal through the Holocaust. Other groups, including Slavs, Roma, and gays, also were targeted by the Nazis for murder.

The United States and Soviet Union emerged as the world’s premier military powers, two contending poles around which other nations circled. Europe, historically home to the world’s wealthiest and most influential states, was ravaged. Pre-war colonial empires survived on life-support, as local residents saw their one-time overlords humbled. Japan essentially disappeared as a geopolitical factor while the Chinese Communist Party seized control of a nation short on power but long on potential.

Korea was divided, triggering an extended civil war. After the war Jews fled Europe for the lands of the ancient Hebrew Kingdom, triggering a religious and historic clash which destabilized the region that became the world’s most important energy source. The newly created United Nations fell victim to the emerging Cold War.

Impacts of the war radiated outward. During the fighting in the British colony of Burma, now Myanmar, Burmans and ethnic minorities split, backing the Japanese and British, respectively. Japanese rule spurred nationalist sentiments in such colonies as India, Vietnam, and the Dutch East Indies (now Indonesia). Moscow, which had largely retreated from Asia after its defeat in the 1904–1905 Russo-Japanese war, regained its lost influence and more. In the United States the conflict brought women into the workplace, highlighted discrimination against African-Americans, and expanded state control of society and economy. A bipartisan interventionist consensus formed, as the country became a quasi-imperial power.

All these consequences traced back to Hitler’s decision to destroy Poland while regaining territories lost in the previous conflict. Indeed, a more accurate start for World War II might be June 28, 1919, when the Versailles Treaty, the most important of the agreements ending World War I, was signed.

Much about the lead-up to the so-called Great War or War to End War—so called before the second and worse conflagration forced a name change—should cause today’s policymakers to pause. While it is hard to imagine a similar global “killfest” today, no one on the morning of June 28, 1914, imagined that in just a few weeks much of the continent would be at war. Later that day a young Serbian nationalist named Gavrilo Princip assassinated the heir to the Austro-Hungarian throne and the latter’s wife. There followed a rush of countries jumping into the abyss of war, in which some twenty million people were killed, four major empires were destroyed, other states were greatly weakened, and the ideological viruses of communism, fascism, and Nazism were released.

The years before World War I were a time of increasing globalization and prosperity. However, the forces of Mercantilism lived on, as influential economic interests demanded protection and talked of economic war. What should have brought people together pushed many apart.

At the same time, nationalism exercised an increasing and increasingly dangerous hold over European governments. The United Kingdom was determined to preserve its colonial empire. France was driven by revanchist demands to retake territory in Alsace and Lorraine recently lost to Prussia. Serbian officials used terrorism to undermine Austro-Hungary and create a greater Serbia. Germany began building a globe-spanning navy and creating a colonial empire to gain what it saw as its rightful “place in the sun.” Russia played protector to Slavs challenging Austro-Hungarian and Ottoman control. Italians desperately sought territorial aggrandizement.

All of these governments were prepared to use military force to advance a wide variety of ends, few terribly important let alone existential. Desire for prestige and concern over credibility, demand for territorial expansion and resource acquisition, and expression of anger and ego motivated some leaders. War was seen as merely another policy option. Even in the United States now venerated leaders, such as Theodore Roosevelt, worried that Americans would grow weak if they did not fight. Perhaps the most venal World War I combatant was Italy, which sent its young men off to die in hopes of plundering its one-time ally, Austria-Hungary. In Rome, at least, there was no pretense of promoting democracy or ending war.

The Europeans divided into contending alliances, making conflict far more likely. Germany allied with Vienna and embraced its ramshackle ally ever more tightly as Italy’s allegiance spoiled and the Russian Empire’s friendship faded. Revolutionary France and despotic Russia created an alliance which turned offensive; the United Kingdom unofficially joined, keeping its own people in the dark while creating the Triple Entente, which threatened Berlin with a two-front war. Rather than act as military firebreaks, these alliances became transmission belts of conflict. A political assassination in a distant Balkans city lit a fuse which ultimately brought every major European power into combat, along with the United States, Japan, and China.

Still, war was not inevitable, even though many policymakers imagined that it was so. Which caused them to take steps making it more likely. For instance, Russia’s growing industrialization placed the Central Powers, Germany and Austro-Hungary, at a growing disadvantage. If conflict was inevitable, then perhaps it was best to fight now, suggested some. Virtually every power vastly overestimated their likelihood of success; none imagined the carnage to come.

Moreover, the detailed military plans and ever-growing military machines created pressure to use them. As the crisis of late July and early August 1914 developed, the opportunity for diplomacy diminished rapidly. As Europeans headed toward the abyss, Germany’s Chancellor Theobald von Bethmann-Hollweg declared: “control has been lost and the stone has begun to roll.” Even last minute “Willy-Nicky” telegrams between cousins the German Kaiser and Russian Tsar could not halt their nations joining a conflict which resulted in the exile of one and murder of the other.

In April 1917 the United States also joined the war. It was an inane decision. Obviously, America faced no threat to its security. With the Atlantic Ocean between Europe and the United States, none of the contending powers had the ability to hurt America. Nor did any desire such a result, since no European power had a meaningful quarrel with the United States. And it didn’t much matter to Washington which imperialistic and militaristic power or bloc dominated the continent. To paraphrase Germany’s late “Iron Chancellor” Otto von Bismarck, Europe’s balance of power wasn’t worth the blood of a single American infantryman.

President Woodrow Wilson’s formal justification for war, that American citizens absolute personal immunity while traveling on a belligerent power’s merchantmen acting as reserve warships and carrying munitions through warzones was too preposterous to take seriously. In fact, the sanctimonious Wilson—said to be waiting for the first vacancy in the Trinity—imagined that he had been anointed by on-high to reorder the globe. However, to achieve his ends the U.S. had to enter the war. For his delusions, which were dramatically dispelled by the Versailles Treaty, 117,000 Americans died needlessly.

As well as, ultimately, the many millions in World War II. While counter-factuals can never be proven, the most likely outcome of Americans staying home in 1917 was a compromise peace. Even with its troops from the east after Russia made peace, Germany was unable to force a decisive breakthrough in France. However, resources from territories freed of Russian control would have eased the brutal British blockade, making an allied victory unlikely. People were weary and governments were exhausted everywhere, which probably would have forced a settlement, however imperfect.

Instead, U.S. forces troops put the Entente over the top. After which Wilson’s attempt to impose a glorious perpetual peace ended disastrously. At the subsequent conference allied powers cheerfully flouted his famed 14 Points as they sought national aggrandizement. Some observers warned of a potential new war in every provision. Germans resisted what they called the Diktat from the beginning; destabilizing grievances were created when ethnic Germans were strewn about in a variety of newly created Saisonstaaten, or “states for a season,” which ultimately were swallowed by Nazi Germany. Even the winners were dissatisfied. The Belgians and French wanted a tougher peace. The Italians believed they were denied a fair share of the geopolitical loot. French military commander Ferdinand Foch appeared to possess a crystal ball when he said of the Versailles Treaty: “This is not peace. It is an armistice for 20 years.” Twenty years and two months, to be exact, between international delegates signing the treaty and German panzers rolling into Poland.