Are Think Tanks Ready for the Age of AI? 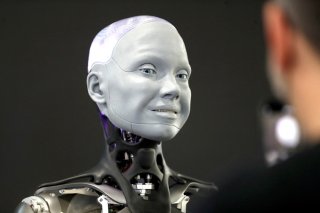 The preeminence of American foreign policy think tanks is too often taken for granted, even if the ideals to which they aspire exude confidence—and these ideals are indeed lofty.

The purpose of a think tank is to serve as a “catalyst for ideas,” to “bridge [the] gap between the worlds of ideas and action,” and to build a source of intellectual capital for future government officials. Think tanks produce ideas, frame policy debates, and link private research to public policy. But, noble as this sounds, foreign policy think tanks have undergone a period of increased scrutiny in recent years with the rise of anti-expert sentiment and dubious sources of funding.

This is not the first time think tanks find themselves in a period of change and turmoil. After the September 11 terrorist attacks, the think tank community began to take public outreach seriously, departing from its “tightly networked and insulated” routines. The 2008 financial crisis jolted them again, this time forcing think tanks to seek out new sources of individual, corporate, and even foreign government funding, becoming “smaller and more specialized” in the process. Today, American think tanks face questions of how to survive and thrive in the twenty-first century, particularly with the rise of political risk consultancies like the Eurasia Group and other for-profit companies like the McKinsey Global Institute.

The full weight of think tanks’ current challenge has not yet been realized. The fourth industrial revolution—the convergence of technological advancements in a range of areas, including artificial intelligence (AI), biotechnology, nanotechnology, robotics, and quantum science applications—is unfolding and promises to define the twenty-first-century geopolitical landscape. These advancements call into question not only “how” ordinary life is conducted, but also “who” humans are becoming as a result, affecting every level of society.

As Betty Sue Flowers puts it: “what makes this era a turning point is that the nature of the disruptions is causing us to question what it is to be human.” Human existentialism reached unprecedented heights with the creation of nuclear bombs, and it will reach a new fever pitch with intertwined uncertainties regarding human nature, individual identities, and the character of human relations in the face of rapid and profound technological changes.

Debates over these technologies often center on their roles in warfare. Specifically, whether they constitute a “new revolution in military affairs” or are simply another development in the history of military innovations. But—perhaps consistent with the suggestion that there exists a “faultline” between “futurists” and “traditionalists”—the fundamental problem posed by these technologies is the way they challenge basic perceptions regarding the technologies themselves, their developmental trajectories, their relationships to human behavior, and the significance of individual identities, in addition to their concrete impacts on social relations. These challenges seep into political and military affairs alike.

The fourth industrial revolution will impact the fundamentals of think tank activity. Think tanks ought to recognize that this challenge is not straightforwardly addressed by simply gleaning mainstream ideas about emerging technologies and connecting them—as if seamlessly—to a policy debate. Concerns over think tank funding are amply warranted, but they pale in comparison to the magnitude of the new technological era.

But with this challenge comes an opportunity: American foreign policy think tanks can stake out an independent, timely purpose for themselves by rising to the challenges posed by the fourth industrial revolution, especially since this revolution is both coinciding with and mutually influencing great power competition between the United States and China.

Currently, however, think tankers tend to coalesce around familiar and intuitive analytic frames and policy ideas. How many times have reports on the hot topics of the day called for a “whole-of-nation” approach or increased funding for basic scientific and technological research? They tend to follow a “recipe.” Frustrations regarding these exercises in analytic repetition occasionally bubble to the surface, leading to a sense that influential analyses are stuck in the same modes of thinking. This problem cannot be adequately resolved merely by making think tanks’ funding sources more transparent.

The fourth industrial revolution throws the foreign policy and national security communities a curveball. Not only are technologies like AI or quantum science applications remarkably more difficult (and more contentious) to fully understand in their own rights than many think tank reports let on, but their rapid convergence with geopolitical shifts and their existentialism-inducing natures are daunting personal and intellectual challenges. Rankings like the 2020 Global Go To Think Tank Index Report—which gives top marks to the Brookings Institution, the Center for Strategic and International Studies, and the Carnegie Endowment for International Peace—are increasingly unhelpful given the fundamental nature of these challenges. The new era will not be intuitive or familiar. Evaluations of think tank activity should, then, be dissatisfied with intuitive or familiar analyses and actions.

“Fourth industrial revolution technologies,” writes Ali Abusedra, “might therefore require fourth industrial revolution laws.” Similarly, emerging technologies require complementary and independent think tanks that effectively straddle the worlds of science and human relations in addition to the worlds of policy and policymakers. If American foreign policy think tanks do not rise to this challenge, others will.

How can think tanks meet the moment? Making progress starts with asking the right questions.

Technology: Do analysts truly understand the characters and contours of the technologies they strategically assess? Do they smuggle assumptions into their analyses that have gone unquestioned? To what extent do analysts draw from or feed into hype cycles that inflate and mischaracterize emerging technologies’ developmental trajectories?

Education: Are prestigious educational institutions like Georgetown University or Johns Hopkins University such professional boosts for up-and-coming foreign policy analysts solely on the merits of their relevant curricula, or does the boost reflect an overriding interest in the political and professional integration denoted by these credentials? For all the merits of these and related institutions, are their future think tank analysts sufficiently educated in interdisciplinary research suited to the twenty-first century?

Professionalism: Are interns and entry-level analysts expected to familiarize themselves with the critical work of the twenty-first century, or the professional rituals of Washington, DC? Even with efforts to diversify the racial and ethnic backgrounds of interns in DC-based think tanks, are their potentially valuable perspectives on the challenges of the fourth industrial revolution lost to the excessive educational and professional uniformity demanded of them? To what extent are relationships between analysts and policymakers disproportionately prioritized over the need for new, unfamiliar, and even counter-intuitive understandings of emerging technologies?

These questions will become more pertinent as the fourth industrial revolution unfolds. They are difficult not only because of their intellectual content but also because they force individuals at every level of the think tank community to take the emotionally painful first steps of seeing them as legitimate and acceptable, if not necessary.

It may seem too bold to suggest these questions are necessary for think tankers to ask as humanity approaches a new era. There is, one could object, good reason for individuals, universities, and specific think tanks to be comfortably familiar and tightly bound to one another. Is it not wise to construct a sphere of research, ideas, and outreach that is direct and seamless in a field where the stakes are high and changes rapid?

Such insulation is useful only insofar as its participants resist falling into a mental groove, a cognitive rut of sorts, in which individuals lose sight of truly innovative and timely work. Thus, while think tank leaders are sometimes called on “to assemble a healthy mix of operational experience and academic training and expertise” to bridge ideas with action, there ought to also be real concern that those tasked with balancing both ideas and action have not recognized the diminishing utility of what has worked in days gone by. Think tanks’ convening power will mean comparatively less if those doing the convening are merely moderators who excel at increasingly outdated ways of thinking.

Excellent work is done at American foreign policy think tanks of diverse stripes. Ambitious and intelligent newcomers are routinely incorporated into the field in a manner of such sprawling complexity as to be rightly envied by those abroad. A think tanker reading these questions, then, may naturally feel defensive, as if their work has gone underappreciated. But asking difficult questions about the composition and nature of the think tank community in the fourth industrial revolution is the only way to retain its preeminence and distinctiveness. With respect to these individuals, national security or foreign policy analysis is not like physics—their results do not speak for themselves. It does not hurt to look in the mirror in a time of uncertainty.

The road forward is not easy. Yet, making the painful choices necessary to ask hard but revealing questions can help secure the preeminence and distinctiveness of American foreign policy think tanks, ensuring they can serve as beacons of truly independent thought in a time of great transformation. But it will only happen if their participants are willing to endure the pain that comes with losing pretensions of certainty and prestige.