Nuclear Crossroads: The U.S. Needs a New Plan for Iran 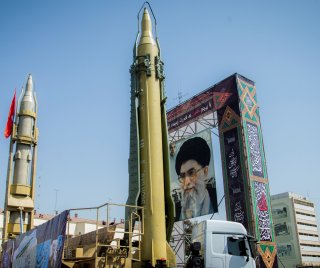 President Joe Biden will arrive in the Middle East shortly, having to confront an especially grim reality. The latest round of the on-and-off-again process to reinstate the Joint Comprehensive Plan of Action (JCPOA), the 2015 nuclear agreement with Iran, has ended as a dismal failure. This week, International Atomic Energy Agency (IAEA) Director General Rafael Grossi issued his gravest statement yet on the Iran nuclear situation. Grossi not only warned about developments in the program itself but also sounded the alarm over its spillover effects, saying that the continued lack of progress in the negotiations “may affect other countries’ decisions … where Iran’s neighbors could start to fear the worst and plan accordingly.” Grossi reminded the world that political leaders have on occasion “openly stated they would actively seek nuclear weapons if Iran were to pose a nuclear threat.” A moment of reckoning on Iran policy is now upon us. This warrants a reexamination of where we are and how we got here, setting the stage for a consideration of what can realistically be done about it.

The Trump administration left office with its Iran policy in tatters. It had unilaterally pulled out of the JCPOA, de facto unshackling Iran from its own commitments under the deal and driving a wedge between the United States and the other negotiating parties to the deal. Instead, it opted for an operationally impactful yet strategically ineffective “maximum pressure campaign.” The Trump administration set twelve harsh conditions for a new deal that made sure the Iranian regime would never bite. At the same time, Trump actively reached out to Iran to negotiate, even promising to quickly obtain a far better deal shortly after he was re-elected. Yet, the Trump administration consistently failed to provide any indication of how it would get there, let alone offer Iran incentives to concede. And, in the process, Trump undermined the credibility of the more moderate forces in Iran, who staked out their political fortunes on a deal with the United States.

The Biden administration thus came into office facing an emboldened and distrustful Iran, with Tehran greatly advancing its nuclear enrichment program and systematically defying IAEA requests for access and explanations of past misdeeds. Worse still, Biden also inherited an Iran that is increasingly confident in its capacity to withstand sanctions while advancing its long-range missile force and evermore malign regional behavior. Preoccupied elsewhere, dreading the prospect of a military confrontation causing a regional conflagration, and lacking significant diplomatic leverage over Iran, the administration opted for a dual-track approach. This approach aims to bring the United States and Iran quickly back into compliance with the JCPOA first while also seeking a “stronger and longer” follow-up deal to tackle the missile and regional issues not addressed by the original agreement.

The Biden administration has opted for a most conciliatory approach to lure Iran back into the JCPOA. It has endlessly reiterated its eagerness to go back into the deal and demonstrated a remarkable capacity to look the other way on Iran’s gross sanctions evasion (with Chinese entities’ collusion) and regional mischief, letting Iran gradually erode the U.S. sanctions regime.

The Biden team went along with Iran’s consistent refusal to talk directly to U.S. officials, procrastination in the negotiations, and additional nuclear transgressions, which it repeatedly dissuaded other IAEA members from taking up until May 2022. Moreover, it has failed to insist that Iran should cap its nuclear progress during the negotiations. The administration has even created a misplaced expectation in Iran that it would consider removing the Iranian Revolutionary Guards—the apex of Tehran’s regional strategy—from unrelated nuclear sanctions, an impression that it elected not to correct until very recently. Perhaps most amazingly, the Biden administration has heretofore failed to heed its own admonitions, made repeatedly over the past year, that time is running out on the effort to return to the JCPOA, presumably implying that the United States would walk away from the negotiations if these proved elusive.

Unsurprisingly for anyone familiar with “bazaar-style” negotiations with seasoned Iranian diplomats, almost eighteen months of fruitless negotiations have yielded no deal, allowing a bad situation to deteriorate further. What remains of the JCPOA—and its fading obligations—is, at best, on life support. Iran is much further along in its nuclear program, essentially just a few weeks away from having enough enriched uranium to produce one nuclear bomb—and many more in short order thereafter. Iran remains defiant on all other nuclear issues and has severely curtailed IAEA monitoring activities in the country. Tehran's elaborate missile and drone efforts continue to make serious headway, and its assertive and destabilizing behavior continues unabated in the region and beyond. A longer and stronger deal to tackle all these issues remains elusive.

A serious consideration of the options in front of us has to start with acknowledging a few rather sobering realities.

First, Iran has already come dangerously close to the nuclear threshold, which might also tempt it to travel the extra mile.

Second, getting all or even most of the JCPOA’s original benefits in checking the Iranian nuclear program is no longer possible. Iran’s enrichment has already marched too far ahead to be effectively rolled back, while one of the sunset provisions on Iran’s obligations under the time-bound JCPOA has already lapsed, and other important provisions will follow suit before long.

Third, all diplomatic and coercive measures put in place by the United States, Israel, and others have exacted a heavy price on Iran yet have thus far failed to convince the leadership to abandon its nuclear pursuits. Iran's core insecurities and profound distrust in Western intentions, which drive its nuclear pursuits, cannot be put to rest by external security assurances, especially in light of its bitter historical anxieties and the sobering lessons of the Russo-Ukrainian War.

Fourth, notwithstanding all of Iran’s progress in amassing advanced enrichment technology and fissile material stocks, its supreme leader has thus far resisted pressures to approve the acquisition of nuclear weapons, leaving Iran many months away from accomplishing this feat.

Fifth, the level of external intelligence penetration of Iran’s nuclear activities, coupled with the remaining monitoring capabilities of the IAEA, has thus far proven its efficacy in deterring Iran’s leadership from both “sneak out” and “breakout” scenarios of nuclear weapons acquisition. This has also promised a timely early warning if Iran does decide to press ahead.

Finally, although everyone’s preference is to avoid a risky military showdown, Iran cannot entirely discount the possibility that the firm determination of Israel, the United States, and, to a lesser extent, the “EU3,” to stop Iran from acquiring nuclear weapons would not ultimately result in a military strike if it pressed ahead. Such an attack would not just leave Iran badly scarred but might also further weaken the already frail foundations of its highly unpopular Islamic regime.

Under these circumstances, making headway requires a new U.S. strategy toward Iran. Washington should employ an innovative mix of diplomacy and subsidiary measures, combining carrots, coercion, and deterrence. On the diplomatic front, it envisages abandoning the drive to roll back Iran’s nuclear gains through the JCPOA and walking away from the current negotiations, while still pledging to reciprocate to any unilateral (but verifiable) Iranian concessions on its more disconcerting nuclear activities by correspondingly easing U.S. nuclear sanctions.

These moves would have to be accompanied by a deterrence posture, putting Iran on notice that—deal or no deal—any further escalation in its enrichment program or weaponization efforts would not only trigger a move at the UN Security Council to “snap back” all pre-2015 sanctions but would also open the way for the application of more coercive measures. While all non-nuclear sanctions would remain in place and could even tighten if circumstances warranted it, the United States should offer relief if Iran engages constructively in discussions on a comprehensive security regime that effectively contains its regional meddling and force projection development.

It is uncertain whether this new approach would yield success. But the odds of this plan gaining some traction among all the key participants look somewhat brighter, principally because it requires less painful domestic political concessions. The United States ought to try this approach in the hope of averting an otherwise guaranteed escalation, as well as to assure its leaders that everything else has been tried should it later prove necessary to step up to the plate with other measures. A breakthrough would also unlock increased Iranian oil exports, easing current concerns over energy security and its impact on spiraling inflation. Biden’s upcoming Middle East trip presents an opportunity to launch a much-needed new strategy and secure the support of America’s regional allies.

Ariel (Eli) Levite is a Senior Fellow at the Carnegie Endowment for International Peace Technology and International Affairs Program.