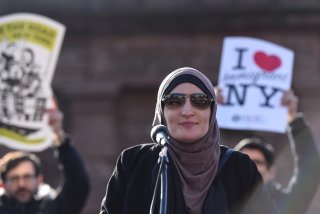 The Women’s March was a massive worldwide protest held in January 2017, the day after Donald Trump was inaugurated as president. The 2017 march, one of the largest single-day protests in U.S. history, was meant to channel anger at Trump’s election, especially after he appeared to admit to sexual assault on the infamous Access Hollywood tape and was subsequently accused by several women of sexual misconduct.

While the annual marches have continued, the central Women’s March organization was plagued in the subsequent years by well-publicized infighting, following heavy criticism of some of the organizers’ ties to Nation of Islam leader Louis Farrakhan.

Over the weekend, the New York Times added another angle to the story, revealing a campaign by Russian trolls to amplify differences associated with the Women’s March’s many controversies. The Internet Research Agency (IRA), a “troll farm” with ties to the Kremlin, directed the campaign, the Times reported, citing the work of a firm called Advance Democracy Inc. It was already known that the IRA assisted the Trump campaign in 2016, but the Times reported that it also worked to undermine the Women’s March.

After the election, the report said, the IRA’s “goals shifted from electoral politics to something more general — the goal of deepening rifts in American society.” The campaign against the Women’s March included fake accounts claiming to be Black women who were critical of “white feminism.” The IRA also pushed posts that were heavily critical of Linda Sarsour, the New York-based activist who was one of the Women’s March’s organizers.

The Times report makes clear that the Russian campaign “did not invent these social divisions; America already had them.” But the piece does not appear to establish the degree to which the divisions in the Women’s March resulted from the Russian campaign, as opposed to fractures that were happening anyway.

It wasn’t the Russians, after all, who got co-founder Tamika Mallory to repeatedly praise Louis Farrakhan. And much more of the fire directed at the Women’s March came from conservative media, not trolls.

News Nation quoted Dmitri Alperovitch of the think-tank Silverado Policy Accelerator, who is also the co-founder of Crowdstrike (he has since left the company), as casting doubt on the effectiveness of the Russian campaign.

“Russia is trying to inflame tensions, for sure, but I think it’s playing a minor role overall,” Alperovitch said. “They weren’t able to disrupt it at all,” he said of the Women’s March specifically. “It’s not clear how many people saw those tweets. … Most Americans aren’t even on Twitter, so we have to take all of this with a grain of salt.”