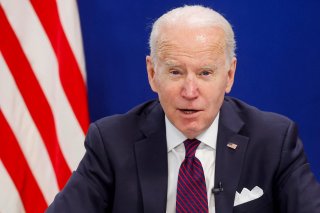 When he entered office in January 2021, President Joe Biden made it clear that one of his administration’s top foreign policy priorities would be finally reorienting the United States to square off against Beijing. In his first speech to Congress as president, Biden warned that the United States was “in competition with China and other countries to win the 21st Century.” Even more starkly, Secretary of Defense Lloyd Austin defined China as America’s “pacing threat.” China is the only country with the economic and technological potential to unseat the U.S.-led and defined international order.

Then Russian troops began to mass on the Ukrainian border.

Today, the United States must address major threats from two different adversaries that require two dramatically different responses. Russia is an “acute threat,” as leading defense officials say. It presents a difficult but familiar type of military challenge that the United States has dealt with before, though turbo-charged by new digital technologies that enable everything from cyberattacks to disinformation campaigns. China, in contrast, is a multidimensional competitor. The Russo-Ukrainian War is heartbreaking, dramatic, and playing out on television every day. The China challenge is complex, subtle, and hard to encapsulate in a tweet. Biden’s job will be to keep the focus on China while managing to contain Russian aggression.

Make no mistake: properly organized, the United States has the capacity to handle both challenges at once. But doing so will require a level of discipline, creativity, and dexterity rarely displayed in American policymaking—even during the Cold War. Balancing these two challenges can only be achieved if everyone is working with a common understanding of the priorities and challenges that will be involved.

Competing with China will require a sound national technology and security strategy: one that acknowledges that the ability to define and control the international order will fall to the country with the technological advantage. Such a strategy can preemptively identify weaknesses, ensure that security considerations are built into products from the beginning, and establish a way for the private and public sectors to continually update and improve themselves even while Congress and the White House are consumed by the crises of the day. The U.S. does not currently have a technology strategy—despite proposed bipartisan legislation to do just that.

Refocusing the United States on competition with China would have been challenging even without Russia’s invasion of Ukraine. When Biden took office, the United States was bitterly divided and struggling to contain a pandemic that had already claimed half a million lives. And China is no ordinary competitor. It is partly a military challenge, but also an economic, political, technological, and even ideological one. Facing off against China will require no less than the retooling of the American economy, including an embrace of industrial policy—a point Biden’s team made early on.

Just weeks into office, the administration characterized the tenor of the U.S.-China relationship as one defined by “strategic competition.” The Chinese government objects to the term “competition” though its own officials often use even starker language. The Biden White House explained that it sought to “revitaliz[e] our core strengths” by “invest[ing] in our people, our economy, and our democracy” while still pushing back when Beijing “directly threatens our interests and values.”

The strategy focuses on three pillars. The first is the need to be strong at home by recommitting to equity, racial equality, social justice, climate sustainability, and democracy itself. This gives the challenge an ideological edge. The second is the need to revitalize America’s economic power. There is a sense that American innovation is flagging, and that the industrial base has been hollowed out by decades of globalization. The third pillar is the need to play defense against China by pushing back against intellectual property theft and blocking China’s access to key technologies. This particular focus inches closer to a containment strategy than the anodyne word “competition” would otherwise indicate.

In other words, American national security will not rely solely on the number of littoral combat ships in its navy or long-range missiles in its arsenal, but on its ability to compete in economic, political, ideological, and technological arenas as well. Biden’s goal was to win across all of these arenas. It is a truly massive endeavor that will require a transformation of American society, the reskilling of its workforce, and an increasingly close relationship between the public and private sectors.

Tangible shifts in this direction have been seen in the last year as the administration focused on reorienting its resources to match its priorities. It committed, for example, to increased force posture in the Indo-Pacific and used the focus on China to partially justify the decision to withdraw American troops from Afghanistan. Meanwhile, in Congress, bipartisan concern over China was rewriting what is permissible in American politics. A landmark competitiveness bill designed to funnel billions of dollars to bolster American manufacturing and invest in scientific research—industrial policy in everything but name—is currently in conference committee (the COMPETES Act). Slowly, America was starting to reorient its strategic priorities to meet the China challenge and realize the long-awaited pivot to Asia.

Today, the war between Ukraine and Russia doesn’t just risk the loss of momentum built up over the past year. It risks sapping resources, time, and attention that it will take to further hone the United States’ China policy and take it to the next level. The United States has the capacity to handle both challenges at once. But it’s necessary to realize that competing with China in a holistic way requires the United States to not simply maintain last year’s pace of transformation but to accelerate it, regardless of a resurgent Russia.

A national technology strategy would enable the United States to do just that. Specifically, it would allow America to set its own innovation agenda rather than reorienting itself to focus nearly exclusively on the challenge posed by a single competitor. Much of the current agenda on competing with China mirrors what China itself has identified as key areas of research or investment in “Made in China 2025“ and elsewhere. The United States needs to match these, certainly, but also go where China is not. America’s technology strategy should take advantage of the strength of American business and innovation and consider ways that government efforts can complement what the private sector is doing. The United States doesn’t need a “Made in the United States 2025,” but it does need to identify a common direction forward and to identify and prioritize key American advantages. Anything else risks funneling billions of dollars into “winning” an undefined innovation war.

What might such a strategy look like? In its simplest form, a technology strategy sets the agenda for the rest of the government and private sector on the key current and emerging technologies that the country needs to stay competitive. Given the centrality of technological developments to world order and global power, such a strategy should have a robust national security focus. A clear technology strategy would help keep the United States on track as it grapples with China and Russia. It would facilitate the ability of the U.S. government to make long-term risk-based decisions and to coordinate with the private sector so that businesses understand the government’s plans and priorities.  And it would operate even while most attention is focused on Russia.

The details of this strategy remain open for debate, but some of the basics can already be found in the text of the COMPETES Act which moved into conference on March 31. Though the House and Senate versions of the bill are starkly different from each other, there are various provisions to establish directorates in the National Science Foundation designed to push forward key advancements, direct billions toward a fund for semiconductor manufacturing, and revamp and reform some aspects of U.S. trade policy to create a more favorable environment for Americans.

Yet even with the COMPETES Act, there is a clear need for a broader technology strategy. The bill’s own laborious path through Congress proves this. It’s a one-off bill that, despite its importance, was delayed for months in the House owing to other legislative priorities. Though both chambers have now passed a version, there is major disagreement on which scientific and technological sectors will be the most important going forward, or even if it’s possible to define them at all.

At a structural level, a technology strategy should focus on identifying issues before they turn into crises. It should also evaluate which sectors may require a form of government intervention—including but not limited to the use of industrial policy tools—and formalize a process for responding when things go wrong. For example, imagine a process that identified chokepoints in semiconductor manufacturing capability before it reached a critical stage, and had the ability to do something about it before Congress was called upon to invest tens of billions of dollars to fix it at a late stage.

Critics argue that the United States does not need a technology strategy. After all, it didn’t have one to develop Windows or the iPhone or the Tesla. But that approach relies too heavily on sheer luck and random talent. Some suggest that implementing a national technology strategy would somehow turn the United States into China or rob America of its innovative edge. This is not true. Other democracies, such as Germany, have robust technology strategies that align with their national values and interests. The problem is that the most recent American efforts have missed the mark. The Trump-era National Strategy for Critical and Emerging Technologies (2020) was underdeveloped and underleveraged. The Obama-era Strategy for American Innovation (2015) was more developed but lacked the national security edge that has become vital in the past half-decade. The Biden administration has a number of individual strategies—for example, its efforts on supply chain and manufacturing resiliency (2022)—this is no substitute for a fully developed national strategy that looks at the nexus between technological, economic, and national security challenges, and deals with them in an integrated manner.