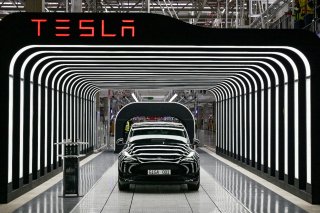 Per CNBC, the delivery number was a new record for the company and a 42 percent year-over-year increase but it was still below analyst expectations.

“Historically, our delivery volumes have skewed towards the end of each quarter due to regional batch building of cars,” Tesla said in its announcement. “As our production volumes continue to grow, it is becoming increasingly challenging to secure vehicle transportation capacity and at a reasonable cost during these peak logistics weeks. In [the third quarter], we began transitioning to a more even regional mix of vehicle builds each week, which led to an increase in cars in transit at the end of the quarter.  These cars have been ordered and will be delivered to customers upon arrival at their destination.”

Analyst Daniel Ives of Wedbush Securities, in a note Monday, said that the sluggish performance was “likely logistics-driven more than demand concerns.”

“Clearly Tesla had some delivery challenges in the quarter with some isolated soft spots in China,” Ives wrote in the note. “While the reasoning (in the PR) from Tesla makes sense on paper, the Street will not be convinced and lingering worries about demand issues will persist until we hear around year-end unit guidance on Tesla’s conference call on October 19th. We believe the unit set-up into 4Q is very robust and could approach massive numbers that are in the 475k+ range. In a nutshell, this quarter was nothing to write home about and the Street will be disappointed by the softer delivery number in 3Q.”

Ives did maintain his “outperform” rating for Tesla.

Tesla will announce its quarterly financial results on October 19. The IEA’s Tracking Clean Energy Progress report released last month found that electric vehicles are “on track” to reach the Net Zero by 2050 Scenario trajectory, one of just two categories that achieved that out of more than 50 (lighting is the other.)

“Electric vehicles are the key technology to decarbonise road transport, a sector that accounts for 16% of global emissions,” the report said. “Recent years have seen exponential growth in the sale of electric vehicles together with improved range, wider model availability and increased performance. Passenger electric cars are surging in popularity - we estimate that 13% of new cars sold in 2022 will be electric; if the growth experienced in the past two years is sustained, CO2 emissions from cars can be put on a path in line with the Net Zero Emissions by 2050 Scenario.”