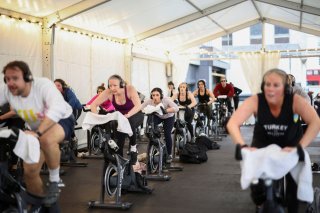 Peloton was riding high during the Covid-19 pandemic. With customers stuck at home, people began buying the company’s products and using them frequently. But once lockdowns lifted, the company hasn’t been able to keep up the momentum, leading to a stock plunge, executive departures, cost-cutting, raised prices, and an announcement in July that they would no longer manufacture their own bikes but would instead outsource them.

“Today we take another significant step in simplifying our supply chain and variablizing our cost structure–a key priority for us. We believe that this along with other initiatives will enable us to continue reducing the cash burden on the business and increase our flexibility,” Peloton CEO Barry McCarthy said in July. Now, McCarthy has sent a letter to employees, vowing both to cut nearly 800 jobs and to raise the prices of two major products, the Bike+ (by $500) and Tread (by $800).

The company also said that it will “reduce our retail presence” in North America, outsource the delivery of products, and eliminate its North American field operations warehouse. “Any decision we make that impacts team members is not taken lightly, but these moves enable Peloton to become more efficient, cost-effective, and agile,” the letter said.

A company spokesman released a statement to The Verge about the company’s move. “Peloton, today, took several steps to further advance our transformation strategy, better positioning the company for long-term success as the largest, global Connected Fitness company,” the statement said.

"The moves we made include the implementation of more strategic pricing; the elimination of our North America final mile distribution network and expansion of our third-party logistics (3PL) partnerships; the reduction of our North America Member Support team; and the signal of our intent to significantly reduce our North America retail footprint. Unfortunately, these workforce shifts result in the departure of 784 employees from the company. Any decision we make that impacts team members is not taken lightly, but these moves enable Peloton to become more efficient, cost-effective, and agile as we continue to define and lead the global Connected Fitness category.”

In its most recent quarter, reported at the end of May, Peloton laid out the company’s turnaround plans. “Turnarounds are hard work. It’s intellectually challenging, emotionally draining, physically exhausting, and all-consuming,” McCarthy said in the shareholder letter. “It’s a full contact sport. That’s why I want to begin this Shareholder Letter with a shout-out and sincere thank you to the employees of Peloton who are working hard to make this company successful. I also want to thank our 7 million Members whose passion for Peloton gives meaning and purpose to our work. Turnarounds also are incredibly stimulating and engaging, the decisions never more consequential, the urgency ever present, the teamwork never more central to the mission.”