Reviews Are In: The iPhone 14 Pro Is Apple’s Latest Must-Buy 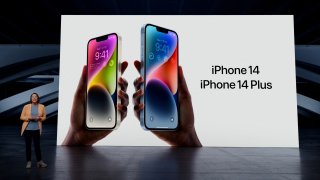 The first reviews arrived Thursday, and the reviewer consensus is that buyers should choose the Pro version.

“Forgive me friends for what I’m about to say: You should just buy this year’s $999-and-up iPhone Pro,” the Wall Street Journal’s Joanna Stern wrote.

“After spending nearly a week testing the new phones, I can say the more “affordable” models are good choices, too. But this year—more than in the past—Apple’s top-of-the-line phones do more to justify their $200 price bump,” she said. “Plus, a pricier phone may actually be within reach now that cellular carriers have gone totally bananas with deals that can knock off hundreds.”

The Verge reached a similar conclusion.

“Apple’s late to having an always-on display, but it’s much more vibrant than other always-on displays. In the United States, Apple’s going all in on eSIM, which no one else is really doing,” The Verge's Nilay Patel wrote of the new phones.

“There’s a basic satellite connectivity system that isn’t quite like anything else we’ve heard about, but Apple is going to ship millions of these phones with the service coming online later this year. All in all, there are more beginnings of big ideas in the new iPhone 14 Pro than we’ve seen in an iPhone for a long time.”

Sofia Pitt, writing for CNBC, urged users to “get the Pro.”

“If you’re looking for a real upgrade, the iPhone 14 Pro and Pro Max are the way to go. Don’t expect many big changes if you have an iPhone 13 and are thinking of getting the base iPhone 14,” Pitt wrote.

“The iPhone 14 Pro models have improved battery life and new cameras. They also have brand new features: an always-on display and the Dynamic Island—an interactive new display area that sits around the selfie camera.”

Mashable, in its review, noted that Apple is “innovating again.”

“With the new iPhone 14 Pro and the iPhone 14 Pro Max, Apple has reduced the notch into a pill-shaped, black cutout on top and gave it life. Apple's calling it the Dynamic Island, which may be a funny name, but it does convey the gist of it: The notch (now island) is no longer a passive thing that's only there to hide something; it's an entirely new feature,” Stan Schroeder wrote.