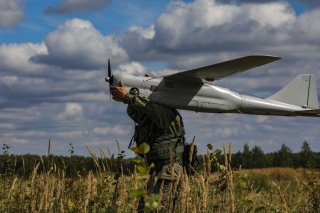 Making accurate assessments of the technical landscape in the Russo-Ukrainian War is a challenge for an outsider. Ukraine’s information campaign has been effective in skewing the perception of the conflict. Russian information has been scarce, vague, or both. However, it is possible to build an assessment of Russia’s drone capabilities used in the conflict from various open sources. The evidence gathered of Russian losses since the conflict began suggests that the Russian Armed Forces (RuAF) did not enter the war with their unmanned aerial capabilities in place and ready to support its operations. However, it now seems Russia is moving towards the type of drone deployments that analysts expected from the outset.

The most notable first appearance of a Russian unmanned aerial vehicle (UAV) was a strike reported by the Russian Ministry of Defence (MoD) on March 4th that was launched by an Orion combat UAV. The Orion was the first armed UAV to enter service with the RuAF, having completed operational deployments in Syria around 2018. Like many Russian weapons systems, it conducted reconnaissance and strike missions in Syria as part of its development process. Despite its apparent success, however, Orion is not thought to have entered service until June 2020, and then only in limited numbers. It is not surprising to see the UAV used in Ukraine. The Orion serves a valuable military need for timely precision strike capabilities and reconnaissance, as well as a sense that the Russians can compete with Ukraine’s Bayraktar TB2s.

While the appearance of the Orion drone demonstrates Russian technological progress, it does not yet play a fundamental role in Russian war efforts. The less advanced Orlan-10 and Eleron-3 drones are far more important. These drones provide vital intelligence, surveillance, and reconnaissance (ISR) functions for the RuAF at the tactical level. Russian motor rifle and tank brigads incorporate a UAV company that is divided into two platoons. One company fields short-range Orlan-10 and Takhion-4s, and the other operates close-range UAVs such as the Granat and Eleron families. The Orlan-10 has a range of 150 km and is capable of transmitting video footage gathered by its electro-optical payload in real time back to its ground control station via 3G and 4G datalinks. The Takhion-4 is a smaller design with a range of 40 km, an endurance of six hours and a payload including a thermal camera or digital video feed.

There have been reports of eleven different variants of Orlan-10, including the primary ISR variant and the RB-341V Leer-3, an electronic warfare variant. Leer-3 uses two Orlan-10s to perform international mobile subscriber identity-catcher (IMSI) and electronic warfare (EW) functions against the GSM-900 and GSM-1800 bands. These are the radio frequency bands allocated to mobile phones. Using modified Orlan-10s, Leer-3 can cover an area of 6 km and collect data on up to 2,000 cellular subscribers. The system was used in Ukraine in 2014 and 2015. Before the Russian invasion in 2022, soldiers in the 54th Ukrainian Brigade received the following texts to their mobile phones, “Moscow gave a go to the use of RF Armed Forces in the Donbas! There's still time to save your life and leave the JFO zone.” It is believed that this type of message may have been the work of Leer-3 and its Orlan-10s.

There were few reports of Russian Orlan-10s and other UAVs in any other role at the start of the conflict. The way in which Russian units were dispersed and lacked coordination supports assumptions that UAVs were not used in the way that they were intended. However, an increase in the recovery of downed Orlan-10s since the third week of the invasion, as well as more regular video releases from the Russian MoD, indicates that this is no longer the case. Unconfirmed reports now indicate three key roles for the Orlan-10 in Ukraine: Convoy support and counter-sabotage reconnaissance, artillery spotting and correction, and ISR provision for reconnaissance-strike missions. The first role is obvious given the early reports of losses inflicted on Russian convoys. Some open-source data indicate that Russian vehicle and truck losses peaked in the first week and have fallen since. Assessing the cause of this change is difficult, but it is possible that the increase in convoy protection with UAVs has allowed the RuAF to reduce their losses and pre-empt Ukrainian ambushes.

The second mission is familiar for Russian artillery formations and has been used extensively in Ukraine since 2014. Video evidence released by the Russian MoD indicates that artillery strikes coordinated by UAVs, often with Orlan-10, include the use of laser guided 152 mm projectiles such as the 2K25 Krasnopol. A UAV illuminates a target with a laser to provide guidance onto the target. Past Russian publications indicated that these strikes would ideally be coordinated with unguided projectiles as well. However, as some of the strikes in Ukraine appear to be against singular vehicles, it is possible that the Russian artillery forces are choosing levels of force that are reasonably sufficient, rather than excessive in their application.

The third use of UAVs that has emerged is particularly ominous in its potential to inflict damage upon the Ukrainian forces. Reconnaissance-strike is the use of real-time reconnaissance and command and control to coordinate missile or long-range artillery strikes against a target of importance at operational depths. A prominent example of this in Ukraine is the missile strike on the Retroville Shopping Mall in Ukraine. UAV footage was ostensibly used to coordinate an initial strike by a long-range missile that destroyed Ukrainian multiple rocket launchers and a storage site for additional rockets.

These capabilities will improve Russia’s speed of response and the precision with which it can engage Ukrainian forces. This may become especially detrimental for the Ukrainian forces if the war becomes static and positional, which may benefit Russia’s pace of warfighting.