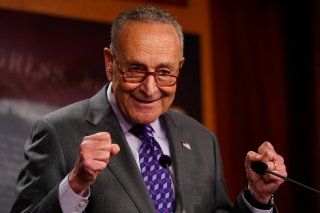 A bipartisan bill that aims to support domestic manufacturing for semiconductor chips cleared Monday a key Senate vote on Monday, sixty-four to thirty-two, setting it up for final passage in the coming days.

This particular legislation is a narrower version of an economic competitiveness package that passed the Senate last year but failed to gain traction in the House. If it passes the Senate as expected, the House will then take up the legislation and send it to President Joe Biden for his signature.

Supporters of the bill argue that the legislation is long overdue and will help lower U.S. reliance on China for chip manufacturing, which they say poses a growing national security risk.

Senate Majority Leader Chuck Schumer (D-NY) said that the passage of the bill would be a “major step” for U.S. economic and national security, supply chains, and “America’s future.” He added that “we will reawaken the spirit of discovery, innovation, invention and optimism that made America the envy of the world.”

With the August recess coming up in two weeks, Schumer noted that he hopes lawmakers “can remain on track to finish this legislation ASAP.”

Biden, who is convalescing from his Covid-19 diagnosis late last week, also took time to praise the bill on Monday while hosting a White House meeting with business leaders on the legislation.

“America invented the semiconductor. It’s time to bring it home,” he said. The bill “is going to advance our nation’s competitiveness and our technological edge.”

The president continued by contending that the “United States has to lead the world in the production of these chips for our own safety’s sake, as well as our economic growth.”

According to CNBC, in Monday’s meeting with Biden, National Security Advisor Jake Sullivan sounded the alarm on the enormous national security risks “that we face right now, today,” largely due to supply-chain vulnerabilities that have been made worse by the ongoing coronavirus pandemic.

Sullivan added that the nation’s continued dependence on semiconductor producers abroad is “flat-out dangerous, and a disruption to our chip supply would be catastrophic. The longer we wait, the more dangerous the disruption.”

Meanwhile, Secretary of Commerce Gina Raimondo noted that “we used to make 40 percent of the world's chips, we make about 12 percent now.”

“The reality is, while we have invested nothing to spur domestic chip manufacturing, China has invested more than $150 billion to build their own domestic capacity. So we're very much behind,” she continued.