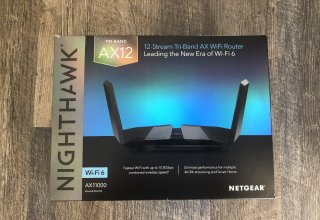 Last year marked the huge rollout of Wi-Fi 6, also known as 802.11ax, which provides more speed and lower latency to all of our Wi-Fi 6-enabled devices.

With its noticeable boost in overall performance, this next-gen Wi-Fi is armed with the ability to send information to multiple devices at once with a single transmission, not to mention better energy management for battery-powered devices like laptops and smartphones.

In order to take advantage of these blazing-fast speeds, you need to choose a router that supports Wi-Fi 6. We are still in the early innings of this new tech, but there are already several nice options out there in the market. Here are five outstanding options to consider.

Let’s start with the ASUS RT-AX88U, which can be had for about $300. As the “AX” in the name suggests, this particular router supports key Wi-Fi 6 upgrades like OFDMA, which enables it to transmit data to multiple devices simultaneously on a single channel. Equipped with four antennas, this router can achieve combined wireless speeds of up to 6,000Mbps across both 2.4GHz and 5GHz bands. Similar to other Wi-Fi 6 routers, your existing Wi-Fi 5 or Wi-Fi 4 devices will be able to connect to it – just without the boosted speeds.

Next up is the Netgear Nighthawk AX12 Wi-Fi 6 Router, which is a tad on the pricier side at $600. It does, however, come with four gigabit Ethernet LAN ports, a WAN port and a multi-gig port that is capable of accepting incoming speeds as high as 5Gbps. You also have the option of aggregating two LAN ports simultaneously for faster file transfers. There are two USB 3.0 ports to boot.

If you’re solely focused on speed, look no further than the TP-Link Archer AX6000 Wi-Fi 6 Router. Priced at about $270, this next-gen device features a 1.8GHz quad-core processor and 8GB of RAM to deliver combined speeds of up to 4,800Mbps on the 5GHz band. Moreover, transfer speeds have registered 1,500Mbps at close range.

If you’re in the market for a solid Wi-Fi 6 mesh setup, be sure to check out the Arris Surfboard Max Pro. Available as a standalone router or a multi-unit mesh system, it will set you back $370, but it boasts top combined transfer speeds of 8 to 11Gbps. If you choose the two-piece Max Plus mesh setup, you will get about 6,000 square feet of home coverage.

Finally, the Netgear Orbi Wi-Fi 6 Mesh Router is said to be fast enough to sustain gigabit wireless speeds, along with top transfer rates of up to 2,400Mbps on the 5GHz band. This premium high-end system also comes with a second 5GHz band that the router uses for a dedicated backhaul connection with the satellite. Budget-conscious folks might shy away from this router because it does cost $700, but keep in mind that prices can fluctuate during sales events.