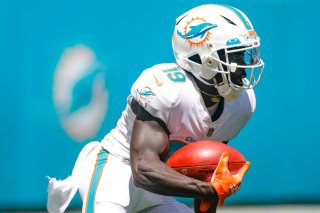 When it comes to the future of NFL Sunday Ticket, there’s a great deal of uncertainty. DirecTV has held the exclusive rights to the NFL out-of-market game package ever since it was first created in 1994, although that deal is believed to run out after the 2022 season.

With DirecTV and satellite TV in general declining, reporting indicates that the NFL would like to move on from its exclusive arrangement, and possibly assign the Sunday Ticket package to a different partner, possibly a tech company like Amazon or Apple. The NFL placed more emphasis on streaming in its most recent TV rights deal, including giving Amazon exclusive rights to the Thursday Night Football package.

A recent report listed Apple as the frontrunner for the Sunday Ticket package, although other reporting has listed Amazon, Disney/ESPN, and Comcast/NBC as possible contenders, as well the possibility that DirecTV, now that it has been spun off from AT&T, will hang on to at least part of the package after all.

Recent reporting also indicates another possible change: Sunday Ticket may give fans the ability to subscribe only to the games of one particular team.

Sunday Ticket, as of now, gives viewers the ability to switch among all of the games that are going on during football Sundays, either by flipping channels or setting up multiple TVs. The package is also frequently subscribed to by restaurants and sports bars, which make all of the games available at once on different TVs.

Major League Baseball allows this, for their MLB.tv package, which allows fans to subscribe to all of the games of one team only, at a lower price point than for the entirety of Major League Baseball. Many fans are in the situation in which they’re a die-hard fan of one team while living in a different city, where their team’s games are not available locally on television. There’s no word, though, on what it would cost to stream an individual game or a team’s games.

Offering such a deal wouldn’t be practical, under the current scenario in which Sunday Ticket subscribers are required in most instances to be subscribers to DirecTV. Under a new regime, say, in which a streaming service had the rights to Sunday Ticket, a customer could sign up with relative ease.