After Five Weeks, the New Quibi Streaming Service Looks like a Disaster 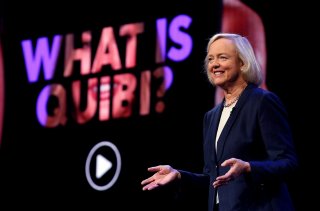 Before Quibi launched on April 6, it set off a great deal of skepticism among observers of the streaming world. A streaming service? Available only on mobile devices? In which none of the content is more than ten minutes long? Sure, the company had big name executives—Jeffrey Katzenberg and Meg Whitman—behind it, it was able to enlist big stars and creators, and it was well-capitalized at launch, to the tune of nearly $2 billion. Investors include the Chinese company Alibaba and multiple Hollywood studios.

Five weeks into its life, it looks like things are going worse for Quibi than anyone could have imagined. None of its launch shows have gotten any kind of buzz, its app has dropped off the App Store charts, and the company’s also being sued over a key component of its technology. Meanwhile, the coronavirus pandemic has rendered its “on the go” ethos irrelevant, while the company will soon back off of the phones-only idea, allowing casting to TVs.

In an interview with the New York Times published Monday, Katzenberg—the Quibi founder well-known for his past stints with Disney and DreamWorks—took stock of what’s gone wrong in the company’s early days.

“It’s not close to what we wanted,” Katzenberg told the paper. “I attribute everything that has gone wrong to coronavirus.” Katzenberg went on to admit that “if we knew on March 1, which is when we had to make the call, what we know today, you would say that is not a good idea” to not delay the launch.

Quibi, the Times said, is currently ranked 125th on the list of free iPhone apps, after it fell out of the top 50 a week after launch. It currently has just 2.9 million users, although the company told the paper that “Quibi says the figure is more like 3.5 million,” of which 1.3 million are active.

This compares to more than 50 million subscribers for Disney+, even though Quibi offered a 90-day free trial at launch, longer than most of its rivals.

Despite the star power of its shows at launch, including Chrissy Teigen’s “Chrissy’s Court,” none have been a breakout hit, and Teigen’s recent feud with a food writer garnered exponentially more media attention than her Quibi show did.

It also hasn’t helped that Quibi does not allow users to screenshot its shows. Part of the success of Netflix’s “Tiger King” earlier this spring was the nearly endless series of social media memes.

Probably the only viral moment of Quibi’s first month consisted of a clip from the “50 States of Fright” anthology series, in which Rachel Brosnahan wears a golden arm and asks to be buried in it. That vitality was only possible because Twitter user Zach Raffio appeared to have filmed one phone with a different phone.

Meanwhile, Quibi was sued last month by interactive video developer Eko, who alleges that Quibi infringed on their patent for the technology that allows shifting between horizontal and vertical viewing.

Quibi is rolling out functionality to iPhone users to cast its shows to the TV this week, and that’s coming later for Android users. Until recently, the Times piece said, Quibi’s advertising was based not on individual shows, but rather the service itself. Coming soon is a documentary series about the disgraced NBA owner Donald Sterling. A compelling subject, to be sure, but not exactly one that’s naturally well-suited to ten-minute episodes.

Quibi isn’t dead. It’s only been a little over a month, they have plenty of shows on the way—although the production shutdown has begun to affect that—and they still have plenty of capital. Katzenberg did point out to the Times that “eighty percent of Quibi’s viewers complete the episode they are watching,” although considering the episodes top out at ten minutes, that’s not exactly a ringing endorsement.

It’s indisputable that Quibi is off to a weak start, and it’s unclear why exactly it was seen as necessary. Because if Quibi’s product is based on the assumption that young people these days have short attention spans, why does every kid I know regularly watch hourlong YouTube videos?