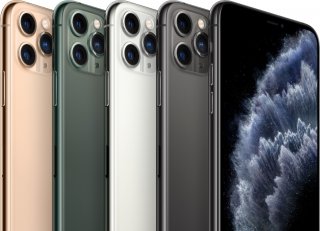 In the several weeks that the government has been recommending that those under shelter-in-place orders wear face masks while venturing outside, many users of iPhones have noticed that the FaceID phone-unlocking feature doesn't work when they're wearing a mask. The software, after all, can't recognize the user's face if it looks considerably different from how it normally does.

Various workarounds were developed for this problem: Users could temporarily take off their masks, although that method can be difficult when a user is trying to pay for something using Apple Pay.

They could also take the mask halfway off, make that their new FaceID profile, and unlock their phone that way, whether wearing a mask or not. The software requires the user's eyes, nose and mouth to be visible in their FaceID photo.

More than one manufacturer has even emerged to allow users to purchase and order masks that look like the user's one face, or at least close enough for FaceID to recognize it.

Now, Apple itself is implementing a workaround of its own.

According to CNBC, the latest beta of the upcoming iOS 13.5 software, which was released to developers Wednesday, has added a function that cuts out a step from the mask-wearing unlocking process. When the user is wearing a mask, the phone will immediately bring up the passcode screen, rather than the FaceID screen.

It's unclear how soon the feature will be available to all iPhone users, but it's expected to arrive whenever iOS 13.5 does.

Also included in the software, per Business Insider, are the first tools being released to developers for the contact-tracing program that Apple recently announced along with Google.

Another way for Apple users to avoid the FaceID problem is to purchase the new iPhone SE, which does not include that feature and instead uses the Home button. That phone, which hit the market last Friday, is an update to the entry-level iPhone SE that was first released in 2016.

The new iPhone SE received nearly unanimous positive reviews from tech critics who praised its great value, and its combination of an older design with newer features.