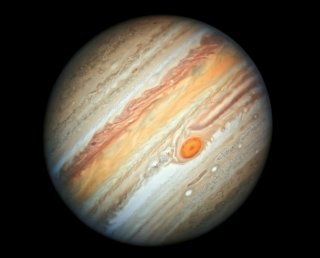 Astronomers have discovered a new exoplanet more than 1,200 light-years from Earth, and this giant is three times the mass of Jupiter.

Given the name Kepler-88 d, this is the third exoplanet in the Kepler-88 system to be detected. It takes the exoplanet four Earth years to complete an elliptical orbit around its star.

With this finding, which was published in the Astronomical Journal, Kepler-88 d replaces Kepler-88 c as the largest planet in that star system.

“At three times the mass of Jupiter, Kepler-88 d has likely been even more influential in the history of the Kepler-88 system than the so-called King, Kepler-88 c, which is only one Jupiter mass,” Dr. Lauren Weiss, the lead study author and Beatrice Watson Parrent Postdoctoral Fellow at the University of Hawaii Institute of Astronomy, said in a statement.

“So maybe Kepler-88 d is the new supreme monarch of this planetary empire—the empress.”

Kepler-88 d was discovered using six years’ worth of data from the W. M. Keck Observatory in Maunakea, Hawaii, researchers said. The astronomers specifically tapped into the keen capabilities of the High-Resolution Echelle Spectrometer instrument.

By being so massive, Kepler-88 d has great influence on the other planets in the star system. Closer to home in our solar system, Jupiter is the biggest planet by far. At 300 times the mass of Earth and twice that of Saturn, the gas giant’s orbit naturally affects the other smaller planets.

Because of this influence, researchers have long suggested that Jupiter is responsible for the formation of the asteroid belt, which likely contains up to 1.9 million space rocks, located between Mars and Jupiter. Billions of years ago, comets from that region could have deposited water on a young Earth.

In addition, Jupiter, along with Saturn, has been considered as the protector of the inner solar system, as the planet acted much like a “vacuum cleaner” by deflecting or destroying asteroids or comets that otherwise would have impacted Earth—and life may not have been able to gain a foothold on our planet.

In the past, giant planets like Kepler-88 d have been found to “promote the development of rocky planets,” the researchers said in a statement.