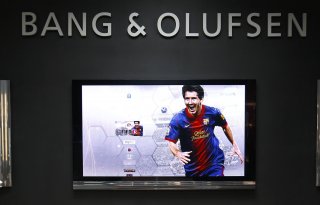 Prior to this year, there was no such thing as a 48-inch OLED TV. LG, at the start of the year, debuted the first-ever OLED TV of that size, while Sony later debuted its own. Philips later did as well, although it’s not available in the United States.

Now, the high-end brand Bang & Olufsen has joined the forty-eight-inch OLED TV race—at a much higher price point than those of its competitors.

The Danish company this week unveiled the Beovision Contour, a forty-eight-inch OLED TV that uses LG’s OLED technology. The company described the TV as “minimalist,” and adds that it “delivers an all-in-one TV and music experience achieved using sound technology based on the award-winning Beosound Stage.”

The arrival means the BeoVision line of OLED TVs now extends from forty-eight inches to eighty-eight inches. Earlier this year, the brand announced the arrival of the eighty-eight-inch 8K Beovision Harmony, which had a price tag of $49,000 at the time of its arrival. That made it both the largest OLED TV and the largest 8K ever released.

The release is timed to coincide with the Bang & Olufsen brand’s ninety-fifth birthday, per Forbes.

“We are excited to launch Beovision Contour, a screen viewing experience that doesn’t compromise on quality or design aesthetics despite its size. Our customers tell us there is a need for a mid-sized screen solution with flexible placement options built to the highest standards of performance and design, which is why we made Beovision Contour,” Christoffer Østergaard Poulsen, SVP of Product Management at Bang & Olufsen, said in the announcement.

The company also unveiled the Beovision Eclipse-55 second-generation which, per the company, “offers a superior TV and music experience and can be connected to external speakers via the built-in surround sound decoder to create even more cinematic impact.”

“Evolved from Bang & Olufsen’s design language and designed in collaboration with Torsten Valeur, Beovision Contour is classic and simplistic, stripped of superfluousness,” the company also said in the release. “The magnificent aluminium frame that outlines the screen inspired the name of ‘Contour’, showcasing Bang & Olufsen’s unrivaled expertise in aluminium manufacturing at Factory 5 in Struer, Denmark.”

“Global availability” for the new products is set for 2021.